Today the Indians officially announced the signing of Nick Swisher to the largest free agent contract in free agent history.

First, here's the highlights from the press conference:

For all our fears about whether other clubs would either outbid the Indians or lure Swisher away with sooner contention, it appears that the visit to Cleveland cemented the deal. And the way Swisher reacted at the press conference, it didn't seem that the decision was that difficult.

The wooing of Swisher left no detail forgotten:

The Indians didn't miss a trick in their wooing of the Swisher clan, many of whom were in attendance Thursday.

When the Swisher's walked into Progressive Field last month, one of the first things they saw was a baby girl's Swisher jersey. The couple is expecting their first child, a girl, in May.

There were other clubs interested in the outfielder, but none went after Swisher like the Indians, who, after trading Shin-Soo Choo saw him as both the replacement for Choo and the big acquisition that this offseason revolved around. Swisher did leave Cleveland without a contract, but fears from past spurnings were unfounded. For the first time since the Indians signed Roberto Alomar, the Indians landed a top-tier free agent, despite theoretical competition against better teams, teams with deeper pockets, and better teams with deep pockets.

It's going to take more than this signing to not only make the Indians a competitive team again, but more importantly, win back disenchanted fans who broke with the team at various points during the last decade. Credibility is an easy thing to lose and a hard one to gain, but from a public relations standpoint, I don't see how the Indians could have done any better since the season ended. Hiring Terry Francona gave the club an immense upgrade in credibility, and Chris Antonetti managed to trade Shin-Soo Choo for one of the best pitching prospects in the game while just about replacing Choo's production with today's signing. They also managed to get Russ Canzler back after losing him on waivers.

The Indians aren't quite done yet; they should finalize a deal with Brett Myers tomorrow, and will probably still look to grab some low-risk starting arms this month. But by and large, both on the talent and finance ledgers, they are done with their big moves. Here's the roster at it looks now: 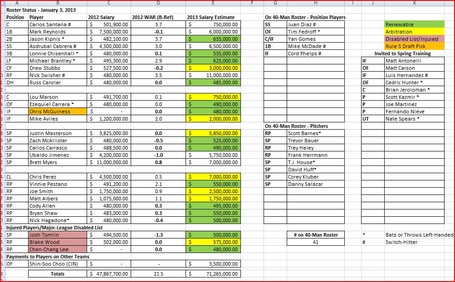 I've taken the liberty of adding Brett Myers to the rotation; when he is added, the Indians will have to drop a player from the roster to get down to 40. I think that David Huff will be the one chosen, given that with the Myers signing the Indians should be able to send both Trevor Bauer and Corey Kluber to AAA. Blake Wood, who is injured, seems to me another logical DFA choice.

As for the construction of the 25-man roster, I've placed the re-acquired Russ Canzler in the DH spot, though that spot (assuming no further acquisitions) should be a revolving door of players taking a semi-day off. If you include Canzler on the bench, that would mean the Indians have only one left-hander in reserve, but I don't see that as too big a deal. Cord Phelps and Tim Fedroff, both left-handers, should have good shots of winning a job at the expense of Carrera, Canzler, or Rule 5 selection Chris McGuiness. There's also Yan Gomes, who could beat out Canzler for the default DH spot.

In the bullpen, I've given Nick Hagadone the final bullpen spot over Frank Herrmann in the assumption that the Indians would like at least one southpaw in the bullpen.