Next up in our tour of the AL Central is the Minnesota Twins, who had a gigantic flaw (starting pitching) and were almost single-minded in addressing it this winter.

The Twins went 66-96, with their starting rotation a huge reason why. Minnesota starters allowed opposing batters to hit .305/.358/.468 against them, and struck out only 4.9 per 9 innings, by far the lowest rate in the league. So the Twins struggled in another rebuilding season. Ron Gardenhire would be retained as manager, but you'd have to think that he won't survive another 90+ loss campaign.

That was it, and Pelfrey would later be re-signed. The Twins did trade away several pending free agents, including Justin Morneau, towards the end of the season, so that by the time free agency arrived there were few players left to leave the club.

Some more flotsam removed from the roster. De Vries was one of a calvacade of starters tried by the Twins in the rotation, and like most of the rest, de Vries wasn't very good (his last start of the season came on September 28th, and the Indians battered him for five runs in five innings). This was just the start of Minnesota's starting pitcher purge.

An organizational soldier who got more playing time after the Twins traded Jamey Carroll.

Welker would be traded back to the Pirates just over a month later, so apparently neither the Twins nor the Pirates were enamored that facet of the deal.

Another starter essentially let go. Hernandez made 12 starts for the Twins in 2013, with three of them coming against the Indians. Here's hoping he makes it back on the Minnesota 40-man roster, for he gave up 13 runs in 12.0 innings against Cleveland, including a very short outing on September 27 in the last series of the regular season.

The Twins, who acquired Welker earlier in the offseason, traded the 27-year-old reliever for a 28-year-old starter. Johnson will have to either make the club out of spring training or pass through waivers, though if the Twins sign another pitcher this offseason that will become unlikely (more on that below).

Polanco is probably the best prospect of the bunch, but the best story of this group is Kepler, who was born and raised in Germany. If he makes the big leagues, I believe he'd be the first player who attended a German high school to play in the majors since Heinz Becker, who debuted in 1943.

It's been obviously for several years that the Twins need to completely renovate their rotation, and this was the first part of that process. Nolasco isn't a great pitcher (career ERA+ of 94), but compared to the dreck they'd been running out there, he's a big improvement. And he can actually miss bats, something Minnesota starters have been comically inept at in the last half-decade.

Another pitcher who can miss bats, but there's a lot of risk with this deal. Hughes has been a major disappointment thus far, and although he still has the potential to turn into a good to very good starting pitcher, giving Hughes a three-year deal is a sizable gamble.

Another pitcher released whom the Indians knocked around in that last regular season series.

Earlier in the winter the Twins announced that Joe Mauer would be moving from catcher to first base. Originally it looked like Doumit would take over as the everyday catcher until Josmil Pinto would be considered ready. But the Braves offered the Twins some potential rotation help for Doumit, and so another caddy would need to be found. Gilmartin is not an overpowering pitcher, but he could end up winning a job in the rotation this spring.

Normally once a player gets to free agency, he generally signs elsewhere, but in this case Pelfrey returned to the Twins. The former Met had a rather uneven (and that's putting it kindly) return season after Tommy John surgery, but apparently the Twins are banking on Pelfery being at worst an innings eater, and he'll be making 4th/5th starter money.

Suzuki essentially replaces Doumit on the Twins roster, so the series of moves starting with the Doumit deal seemed to work out fairly well., although they'll be giving up offense in the catcher swap.

A couple former Twins come back to the fold. Based on what I saw of Kubel late last year, I don't think he'll make the club. I don't think Bartlett has much of a chance either barring injury, as Florimon, Dozier, and Escobar seem to have the middle infield spots locked up.

So here's what a projected Opening Day Twins roster looks like: 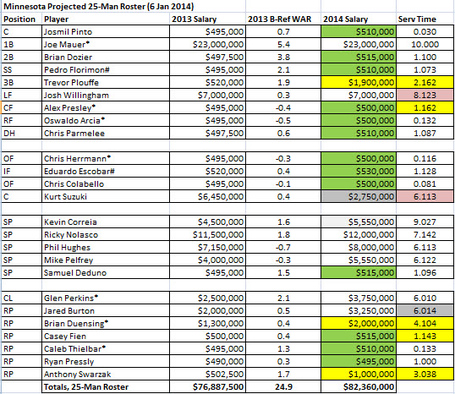 The Twins have only three arbitration-eligible players, and two of them are relievers. Mauer is at this point one-fourth of the payroll, though in past years the Twins have eclipsed the $100M mark, hence the possibilities of another starting pitcher signing. I don't think the Twins are done making moves. They seem to be in on Matt Garza, and if they're talking to Garza, they're certainly talking to Ubaldo Jimenez and Ervin Santana. So although for now I've penciled in Samuel Deduno as the fifth starter, I'm going to guess he won't be in that spot come this time next month.

Unlike Kansas City, the Minnesota starting lineup seems really fluid, and that makes sense how young everyone is. Seven of the nine projected Opening Day position players have less than two years' service time, and while there's some talent there (Plouffe, Arcia) and more on the may (Sano, Buxton), the Twins are probably going to struggle to score runs.

I'm not really sure who is going to hold down the DH/RF/LF slots. Chris Parmelee and Chris Colabello should both make the team now that Doumit is gone, cycling between DH and the outfield, while Chris Herrmann, if he makes the club, would catch some and play some outfield. Josh Willingham is coming off an awful season, and he's never been a good defender, so I'd expect the Twins to have a quick hook with him. Arcia has lots of talent and should get the majority of time in one of the corner spots.

The bullpen should continue to be Minnesota's strength. Glen Perkins had his third straight outstanding season, and he'll be re-joined by Jared Burton, Brian Duensing, and Casey Fien.  Caleb Thielbar had a very nice rookie season, and I'm penciling in Pressly and Swarzak at the front end of the bullpen.

Overall, I think the Twins are still in rebuilding mode. They seem to have stabilized their rotation somewhat, though they had to spend a lot of money just to get respectable. Mauer should be more productive now that he's not catching any more, but the Twins will need a lot of breakout seasons in order to have a decent offense. Lots of things will need to go right for them for the Twins to reach .500, never mind catching the Tigers for the division title.