We wrap up our look around the AL Central with the 3-time defending division champion Detroit Tigers.

The Tigers won their third straight division title last season, although it was not nearly as easy as they would have liked. They hovered around a .500 record, for most of the season's first half, before creating some separation in July and August, taking a 7.5 game lead into the final month, before putting things into cruise control and winning the division by only one game (though it was never really in doubt).

The Tigers had their way with the Tribe, winning 15 of 19 contests and outscoring them 120 to 70. Had the Indians won even a couple more of those contests, the month of September could have been a real dogfight.

Miguel Cabrera flowed up his Triple Crown season with another fantastic year, winning his second straight MVP. In fact, since 2010, he has averaged this line, 337/425/612 177 OPS+. Egads that is Manny Ramirez scary. Other than Cabrera though, there was not another dominant stick, although they were all above average except Alex Avila and Andy Dirks. The bench was fairly serviceable with Matt Tuiasosopo and Brayan Pena hitting well.

While the hitting was very good, what made this team in 2013 was the starting pitching. With Justin Verlander, Max Scherzer, and Anibal Sanchez leading the way, they were in almost every game they started. Those three, along with Fister and Porcello started 156 of the 162 games for Detroit. The only team in recent memory that can claim that type of stability was the 2005 Indians who had 158 of their 162 games started by the planned rotation.

As good as the starters were, the bullpen was a bit of an Achilles heel for them, at least in the early part of the season. The initial plan was to use a committee approach with Bruce Rondon as the leader, but he wasn't quite ready. They resigned Jose Valverde for a bit, but he lasted just 20 games. After trading for Jose Veras, Joaquin Benoit settled in as the closer. The only other reliever with sparking numbers last year was Drew Smyly.

Dotel, Bonderman and Santiago have not signed with anyone yet. Benoit signed a 2 year deal worth $15.5M with the Padres. Infante netted a $30M deal over four years with the Royals. Veras got a one year deal worth $4M from the Cubs and Pena got $2.275 over two seasons from the Reds. But the big winner was Peralta, who parlayed himself into a four deal worth $53M from the Cardinals.

The Tigers tried outrighting both to make room on the 40 man roster heading into the offseason but each was snagged. Tuiasosopo is the bigger loss between the two as he spelled Dirks pretty well and was one of the few cheap guys on the roster. He will likely still be a fourth outfielder for Arizona though with the Trumbo pickup.

I believe all have non-roster invites to spring training, but are all most likely roster filler for the upper minor leagues. The only one I think that gets rostered in Paulino as Bryan Holaday may not be ready to be a backup just yet.

In one of the more shocking offseason deals, after just two seasons after signing one of the largest free agent contracts in history, Prince Fielder was sent packing. He was traded for another albatross contract, albeit not as trossy as Kinsler's deal runs out three seasons quicker (with a team buyout). Kinsler is also two years older (he'll be 32 this season). Kinsler has a huge edge on Fielder in WAR (4.9 to 1.7), but most of that is because of his position and because of his defense (1.5 to -2.3). If we compare him to Omar Infante, he is a slight upgrade on offense, but that should abate due to Comerica Park.

This was likely an essential salary dump as the arbitration numbers Fister would have commanded and/or potential long term deal would have prevented an offer to forthcoming free agent Max Scherzer. Ray is the prize of this haul, he is slated as the #3 MLB Tiger prospect. He struck 160 in 142.0 innings splitting time between A+ and AA. He was an overslot pick in the 12th round in 2010. Krol is an average lefty who made his debut last season and has three seasons before arbitration kicks in. Lombardozzi becomes a cheaper version of Ramon Santiago. He can play most of the infield and the corner outfield spots in a pinch. He hits arbitration next year.

After the semi-disaster at the back end of the bullpen for the last two years, this deal should solidify the ninth inning, provided his age (39) doesn't catch up to him quickly.

After losing Tuiasosopo on waivers, the Tigers were forced to spend some cash to get a fourth outfielder. Davis has been ok as a part time player for the Blue Jays the past three seasons. He has speed, but has been known to be caught quite a bit (leading the league in caught stealing in 2012 with 13). He is also approaching his age 33 season so he could slow down perhaps.

Not sure I understand this one, but he should slot in at the back end of the bullpen rotation unless his magic from 2008 miraculously reappears.

One last transaction should be noted ... 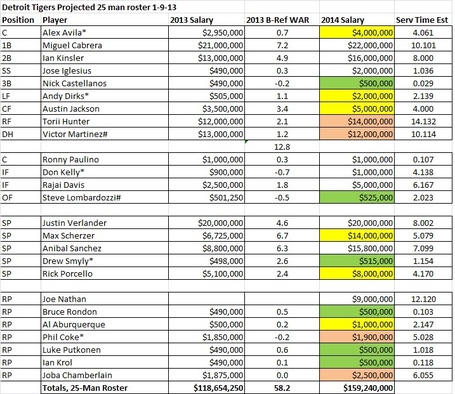 Even with the dumping of Fielder's contract, the Tigers should surpass last year's total by a few million dollars. While WAR favors the Kinsler for Fielder swap, if you make it Kinsler/Castellanos for Infante/Fielder, it seems like an overall downgrade, though not a massive one, as Cabrera should play much better defensively at first.

Also, dealing Fister and putting Smyly in the rotation is a downgrade. Nathan should stabilize the pen, that upgrade likely won't offset the Smyly rotation downgrade. Their top three of Verlander, Scherzer and Sanchez are still better than any other MLB trio, but the chance that five starters make all but 6 starts for them again are highly unlikely.

Also, the switch in managers could prove to be unnerving for veterans who were used to Leyland. Leyland usually was fairly even keeled and the players knew where they stood. Ausmus is a rookie manager, without even any MLB coaching experience. He is a complete unknown at this point.

On paper, they should run away with the division. However, the roster turnover (16 players from the 40-man roster are gone), rookie manager, and slightly aged roster mean there is a chance they're in for a different type of season. They have not had many major injuries the past few years either, but Verlander just had core muscle surgery and is out six weeks, and health issues catching up with them could derail their season as well.