Now that the Winter Meetings have concluded and many of the major transactions have occurred, we figured it would be useful to take at look at what the other AL Central clubs have done. Next up: the Chicago White Sox.

Now that the Winter Meetings have concluded and many of the major transactions have occurred, we figured it would be useful to take at look at what the other AL Central clubs have done.

Here's our look at the Kansas City Royals

Next up: the Chicago White Sox

The White Sox had one of their most disappointing seasons in recent memory. They just avoided losing 100 games and had their poorest season since 1970 and seventh worst winning percentage in franchise history. They also finished 22 games worse than their 2012 record, a very steep drop off. After finishing just three games behind the Tigers in 2012, 2013 was supposed to be a season in contention.

Granted they lost A.J. Pierzynski, Francisco Liriano and Kevin Youkilis in free agency, but Liriano had only made a dozen inconsequential appearances and Pierzynski and Youkilis were going to be 36 and 34 respectively. The rotation looked to be okay, Tyler Flowers and/or Josh Phegley were supposed to fill in for A.J. and Jeff Keppinger was signed to cover third.

By the end of April the White Sox were 10-15, in last place, and 5 games back of the Tigers. They treaded water in May by going 14-13, still 4.5 back of Detroit, but as summer kicked into full gear, Chicago decided to go into hibernation. In June and July they went a woeful 16-37. The Tribe contributed a huge part to that misery by sweeping two separate 4-game sets those two months, and a third one in September. In fact, after winning the fifth game of the year on April 24 (for a 2-3 record), the White Sox lost their next 14 games against us.

Neither Floyd or Axelrod are big losses. Floyd was on the shelf after April and just shy of $10M on his contract. He finagled a one year deal with the Braves for $4M. Axelrod had a 75 ERA+. 1.661 WHIP and just a 5.1 K/9. He is in his third year of pre-arbitration and has not signed with anyone else yet.

Omogrosso is a former sixth round pick from 2006 and Troncoso is a former Dodger prospect. They were both back of the bullpen guys. Anderson is a typical AAA backup catcher. None of them should be missed.

Neither Bierman or Kline is supposed to challenge for playing time in 2014 as they are slated for AA Birmingham in the Southern League. Laumann is slated for the South Atlantic League (A). None are named on the 40-man, or on MLB's Top 20 prospects.

This is the major signing for the White Sox this offseason. Abreu is supposedly 26, so the 6-year contract will be for his prime years. He received a $10-million signing bonus and is set to be paid $7M in 2014. He is scheduled to wear #79, the number he wore in Cuba after his mother picked it out. He was highly sought after, with five other teams biding near the White Sox offer. He should bat cleanup (or third) and be a serious upgrade from Paul Konerko, with Adam Dunn moving back to DH.

I believe all have non-roster invites to spring training, but are all most likely roster filler for the upper minor leagues. Of the bunch, Purcey likely has the best odds of making it (back) to Chicago this year.

Again, I believe all have non-roster invites to spring training.

This was a bit of a surprise. Some thought Konerko was heading off to retire. He will be 38 this season and struggled through a 244/313/355 80 OPS+ season. He most likely will play the White Sox version of Jason Giambi, pinch hitter and occasional DH.

McDade was removed to give Konerko a roster spot and Tekotte's spot was needed in case deals occurred at the upcoming Winter Meetings.

This former Royal was hurt in early 2012 and missed much of 2013, making five rough outings for their AAA affiliate, Omaha, last season. He is currently penciled in their #4 spot in the rotation on MLB.com. Unless he has a good spring, I don't expect to see him until June or so until he works out the kinks.

Eaton was a 19th round pick from 2010 who shot through the minor league system. He is a tad short at 5-8, but was the Pacific Coast League MVP in 2012. He played in 66 games for the Diamondbacks last year and slashed 252/314/360 86 OPS+. He is currently penciled as their center fielder next year with Alejandro De Aza becoming the fourth outfielder. I am not sure he I much of an upgrade, yet. He is entering his age 25 season.

12/12/2013: Claimed C Adrian Nieto on waivers from the Washington Nationals

12/16/2013: Traded RP Addison Reed to the Arizona Diamondbacks for 3B Matt Davidson

This almost feels like an addendum to the Santiago/Eaton deal. Or it might have been a separate discussion that sprung from those talks. Davidson was a first round supplemental pick in 2009 and was the #88 Baseball America Prospect and #77 MLB.com prospect before last season. He hit 280/350/481 for AAA Reno last year and had 17 home runs in 115 games. He immediately becomes a top prospect in the system. Reed was their closer last season, and pretty effective with 40 saves in 48 tries.

12/22/2013: Claimed LHP Eric Surkamp off waivers for the San Francisco Giants and lost IF Brent Morel to the Toronto Blue Jays on waivers

Basically a trade of fringe 40 man roster guys. After picking up prospect Davidson, Morel probably didn't have a spot and they took a chance on a lefty, just like most franchises do. 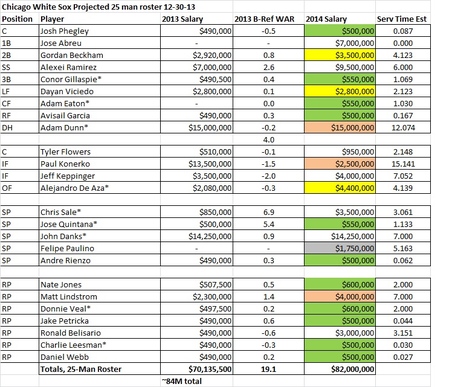 Their payroll looks to be pretty close to last year's number, $80-85M. I like the upgrade at 1B, Abreu, but I think Eaton will be only a marginal upgrade, if at all. Either Phegley or Flowers will have to really step it up behind the plate and Beckham needs to finally deliver or he may be gone after the year. Davidson is likely their third baseman of the future now, but Gillispie and Keppinger might start the year there. Avisail Garcia will have to come through to make good on the Jake Peavy deal. Other than Dunn and Alexei Ramirez, this is a very young lineup. The infield had a WAR around 2.0 overall last year. Abreu should be good enough for a 3-4 WAR if he can handle MLB pitching.

Sale is a great ace, and Quintana is pretty good as well. With Danks on board, they have three lefties that used to give the Tribe fits. I don't think Paulino is the answer, so Erik Johnson might get a shot. The loss of Reed as closer is very risky as Nate Jones is unproven there. He was okay last year, but far from showing he has late inning magic.

The bench looks poor to me and the farm system has been down for a few years. They have had some infusion of talent, but I suspect they are at least two years away. They won just 63 games last year and I don't see enough improvement from them to contend. If everything breaks right, I can see 80 wins, but my best guess is a win total in the low 70s.