Now that many of the major moves have been made this winter, we figured it would be useful to take at look at what the other AL Central clubs have done. First up: the Kansas City Royals.

When last we saw the Royals it was after a crucial series in Kansas City in September. The Indians lost the series 2-1, but that one win effectively torpedoed any hopes for the Royals to make the playoffs. They finished the season 86-76, one of their best seasons in several decades, but ultimately it was a disappointment to a team and fanbase that expected much more. For 2013 was to be a breakthrough season. The previous winter the Royals made a blockbuster trade, acquiring James Shields and Wade Davis for, among other players, top prospect Wil Myers. They also acquired Ervin Santana in a salary dump and re-signed Jeremy Guthrie. These moves were designed to fortify a rotation that been the weak spot on a young and talent team, and they did everything that GM Dayton Moore intended them to. But it was the young offense that held the Royals back for most of the season, and by the time players like Eric Hosmer started to hit, it was too ultimately too late in the season for them to make the playoffs.

Dayton Moore, who before the season was on thin ice, was given an extension in November, so he'll have the opportunity to finish what he's had 6.5 years to accomplish.

More from our SB Nation cousin

More from our SB Nation cousin

Santana was the big loss. The Royals essentially acquired him by taking on his salary, and it was one of the best moves of the winter, as Santana posted 127 ERA+ and threw over 200 innings. At this time Santana is still unsigned, but it's extremely unlikely that he'll return to Kansas City. Chen, who had had a career rebirth with the Royals, started the 2013 season in the bullpen but ended it back in the rotation. Tejada will likely retire, and Pena's career is close to its end as well.

Mendoza started the season in the rotation, but was removed half-way through. With him eligible for arbitration, the Royals released him before the non-tender deadline.

Pena will compete with Brett Hayes to back up Salvador Perez

Paulino was eligible for arbitration.

Vargas will essentially replace Santana in the rotation. The left-hander has a penchant for giving up home runs, but Kauffman Stadium should help him.

12-2-2013: Traded LHP Will Smith to the Milwaukee Brewers for OF Norichika Aoki

Aoki can elect free agency after the 2014, but this was a very nice trade regardless. Aoki is an on-base machine, and should be an upgrade over what the Royals had in right field in 2013.

This might be the biggest upgrade in the division this winter. Infante is not an elite second baseman, but going from Chris Getz to Infante is massive improvement.

12-18-2013: Traded OF David Lough to the Baltimore Orioles for 3B Danny Valencia

After acquiring Aoki, it was a given that the Royals would need to trade one of their outfielders, and they got a very useful player. Valencia should play a lot of third base, and perhaps some first base against left-handed pitching. He also represents a backup plan if Mike Moustakas continues to struggle. 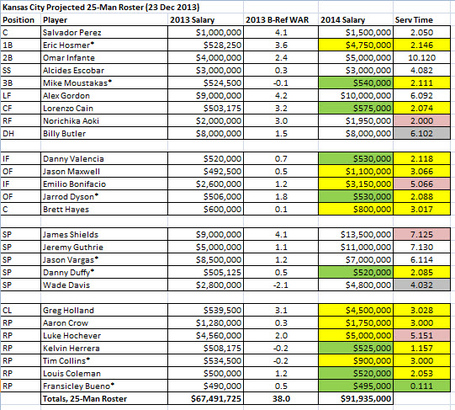 The Royals payroll should end up around the $90M mark. I can see why there have been rumors about Billy Butler being shopped, as right now the Royals have a five-man bench (Maxwell/Dyson in the outfield, Valencia/Bonifacio in the infield, Hayes or Pena as the backup catcher). But otherwise it looks like the position players are set.

The rotation is a bit unsettled. James Shields is a solid #1, but things seem a but shaky after him. Luke Hochevar ended the season in the bullpen, and was outstanding as a setup man, but perhaps he'll move back to the rotation, with he and Wade Davis trading places. Danny Duffy, who will be over a year and a half removed from Tommy John surgery, should return to the rotation.

The bullpen is outstanding, but starting to get somewhat expensive, with Greg Holland, Aaron Crow, Hochevar, and Tim Collins all eligible for arbitration.

But those are fairly minor quibbles. The main pieces seem to be in place for another playoff run, and the Indians will have to contend with them all season this time.