Yesterday's performance by Corey Kluber was among the best by an Indians pitcher in the last twenty years.

Share All sharing options for: Corey Kluber is an indestructible pitching machine

The Klubot was originally designed by Skynet to infiltrate enemy populations and assassinate selected targets (this led to the horrific events at Lake Elsinore in 2008). Dr. Miles Dyson, a leading scientist at Cyberdyne Systems was able to reprogram the Klubot in 2010, and after nearly three years of modification in the lab (with a few field tests along the way), this new version of the machine was unleashed upon the American League in April of 2013. Its performance has not been without a few glitches along the way (in late June, during a mission in Baltimore, it short circuited almost completely), but for the most part the results have been positive. Yesterday, April 24, 2014, Klubot operated better than even the program's most ardent supporters had imagine was possible. 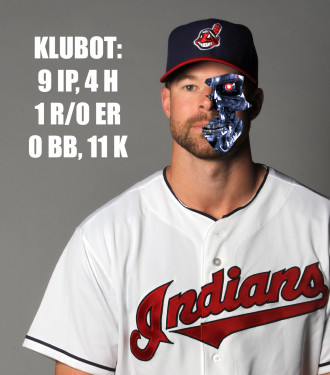 Corey Kluber pitched the first complete game of his MLB career on Thursday, and he struck out a career-high 11 batters along the way (including Eric Hosmer three times, which I especially enjoyed). Kluber didn't walk anyone, he allowed only 4 hits (all of them singles), and the only run that came across for Kansas City was unearned; if Nick Swisher had made a fairly routine play in the 8th inning, it would have been a shutout (and probably a Maddux too).

It was very clearly the best game of his career (and a needed break for the already taxed bullpen, especially with the team in the midst of 15 days without a break).

In addition to being the best game of his career, Kluber's performance yesterday has a case as the best game by any Indians pitcher so far this decade. Here are the contenders, in chronological order:

Justin Masterson (June 9, 2010 vs. Red Sox): Masterson pitched a shutout against a potent Boston lineup as the Indians romped to an 11-0 win. He struck out 6 while allowing 2 singles and 2 walks on 110 pitches. Game score: 87

Fausto Carmona (September 10, 2010 vs. Twins): Carmona/Hernandez pitched a shutout against that year's AL Central winners, with 7 strikeouts, 3 hits (one of them a triple), and 1 walk on 108 pitches. Game score: 87

Justin Masterson (June 20, 2012 vs. Reds): Masterson went the distance against The Tribe's cross-state rival. Like Kluber yesterday, the only run he allowed was unearned. 9 strikeouts, 3 hits, 0 walks, 110 pitches. Game score: 88

I suppose it might just be the recency effect, but I'm going with Kluber's game. I think if that run hadn't scored, his game would be the clear choice, and the run was as much Swisher's fault as Klubers.