I look at Amed Rosario and think, “I can fix him.”

Maybe it’s Valentine's Day coming up, but I’ve been spending some time thinking about Guardians fans' relationship with and feelings about our team’s shortstop. Rosario is a lightning rod for conversation with fans defending his ability to be a consistently above-average player and other fans reminding those former fans that Rosario has consistently been just above-average. This dynamic reminds me of Daniel Jones, a player currently in the news in the NFL playoffs, and the views of fans and experts on Jones.

I don’t want to ask anyone to be a football fan to understand the premise of this column. So, let me describe the situation in very simplistic terms in case anyone isn’t versed in the NFL.

Daniel Jones is the quarterback for the New York Giants. When drafted, experts widely panned the pick as Jones wasn’t known as having a particularly accurate throwing arm or quick decision-making abilities — two strengths particularly desired for people playing the quarterback position. However, with the help of a new coach, Jones has put together a very successful season for the Giants, just helping them win a playoff game, by making opportunistic use of his speed and his ability to extend plays when under pressure. By allowing plays to go longer, he has been better able to identify and take opportunities that unfold.

This brings us to our own player underappreciated-by-experts and frequent focal point of fan skepticism occupying a key position in Amed Rosario. The parallels aren’t perfect, of course, because Rosario was an extremely well-regarded prospect. But, with his major-league career clearly established, Rosario has shown his strengths and weaknesses. He hasn’t reached the levels of power some scouts thought possible, and for his career is essentially a league-average hitter with a 95 wRC+. He’s also been a below-average defender. But, he offers elite speed and contact abilities that have produced a career .274 batting average.

As I watch a player like Jones under new coaching lead his team to a first-round upset of the Minnesota Vikings, I wonder if there is any small adjustment Rosario can make to get a little more out of his talents and maximize his value to the team.

I began at the observation level with a tendency I’ve anecdotally noticed by Rosario to swing and miss at breaking balls down and away with two strikes. Whenever a count is 0-2, 1-2, 2-2, or 3-2, and Rosario is facing a pitcher who has a slider or a curveball, I am shocked when he doesn’t see one, and even further shocked if Rosario doesn’t cut and miss at the pitch when it is correctly located out of the zone. 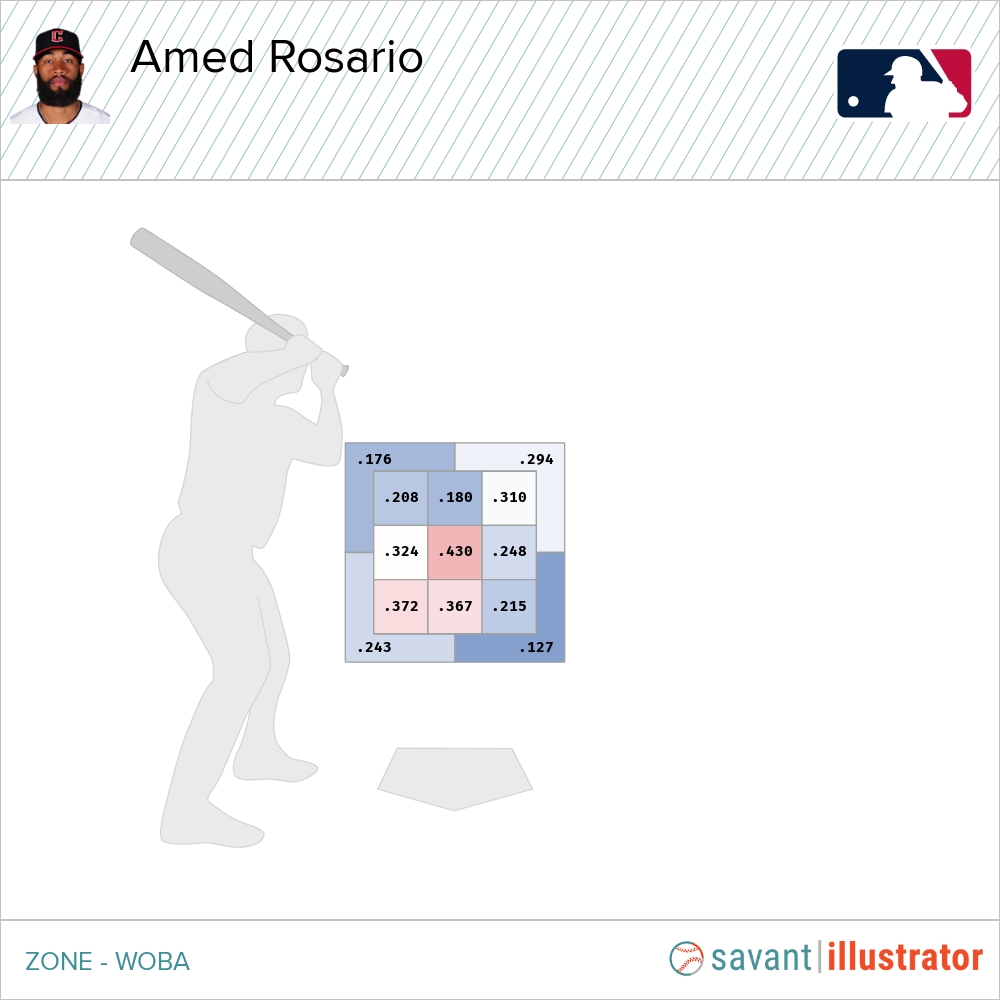 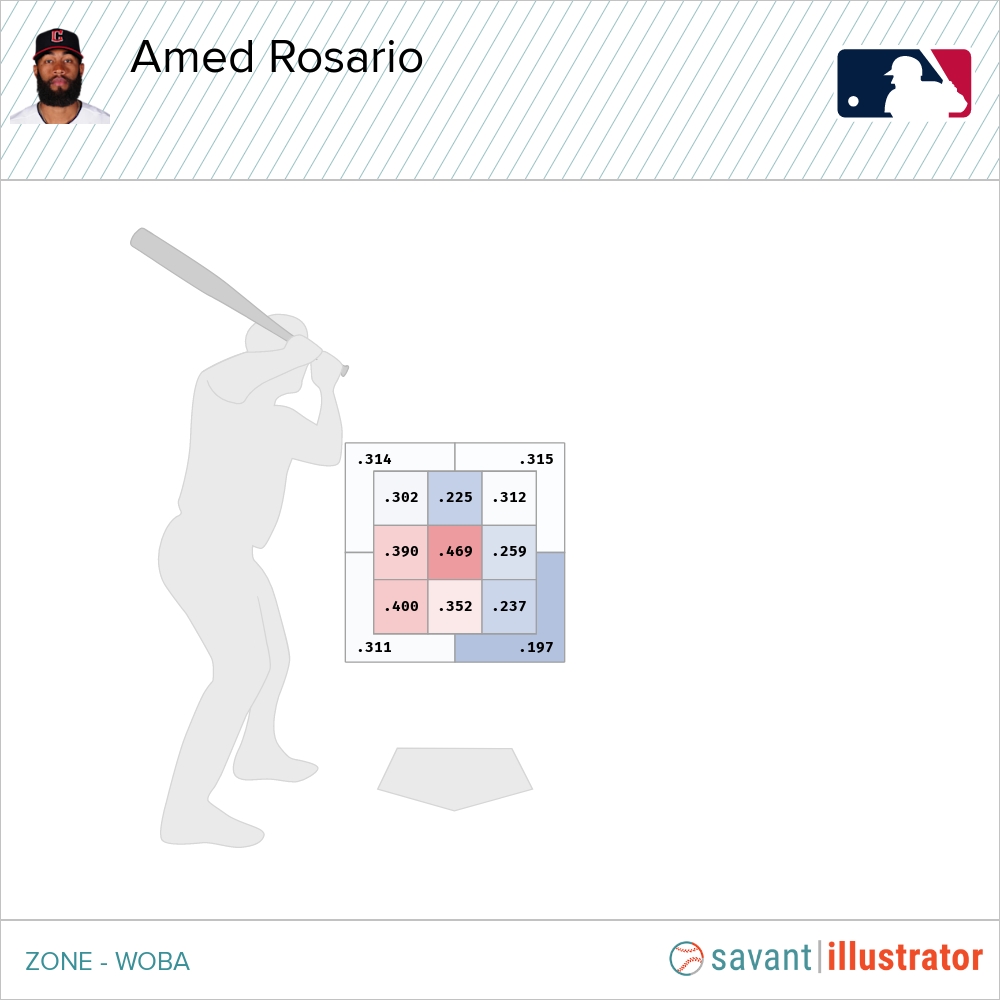 Rosario had a 40.3% strikeout rate against sliders and curveballs down and away in 2023. It’s clearly something pitchers know about, as well, because Rosario has seen 1,024 breaking balls in his career and by far the most common place pitchers have thrown them at a 35% rate is down and away.

To attempt to answer this question, I looked at some other players with similar profiles and their career numbers with two strikes:

Amed Rosario, as seen above, has the highest strikeout rate and lowest wRC+ of these similar hitters. As just noted, he’s also seeing a high percentage of breaking balls down and away — in the zone where he has the lowest wOBA of his career by far. The book is out — if you can get Amed Rosario to two strikes and you have a breaking ball in your arsenal, you need to throw it to him then, down and away.

My attempt to be Brian Daboll, coach of Daniel Jones and the New York Giants, in this article is to ask if it is possible for Amed Rosario to enter into the season with an approach to look for breaking balls down and away with two strikes by determining not to swing at these pitches when possible?

I am absolutely aware that as I sit in my chair and type about this concept that it is incredibly hard to tell the difference between fastballs and breaking balls as a major-league hitter, especially when you are trying to protect against a called third strike. However, Rosario is a good hitter. He is obviously adept at recognizing location, speed, and type of pitches. I believe if he could enter into plate appearances with the determination that if he gets to two strikes in the count and he recognizes a breaking ball coming out of the pitcher’s hand, he should take a pitch. Chances are, the first breaking ball he sees with two strikes is going to be out of the zone. If he is able to take that pitch, he will give himself the chance to get a different pitch or a breaking ball that is closer to the zone.

Amed has also shown the ability to recognize deficiencies and make needed adjustments in the past, which can be seen if one compares his 2021 and 2022 defensive runs saved, where he developed from a below-average to above-average defender at short (nine runs below-average to six runs above-average).

I believe even a slight change in his approach to breaking balls down and away will allow Rosario an increased chance to make contact with a pitch where his greatest skill, elite hustle, and speed, can come into play. Rosario can, thus, maximize his value in another small area of the game.

As Daniel Jones has learned to extend plays and make the most of his talents, Amed Rosario can extend at-bats to exploit the resource of talents he has more often. I’m sure I’m not reinventing the wheel or coming up with anything Rosario’s hitting coaches haven’t encouraged, so I will be interested to track Amed’s performance against breaking balls down and away in 2023 to see if any kind of adjustment is made.

It’s not hard to love Amed Rosario as José Ramírez hypes him up and other young Guardians extoll the example he sets for the team. I think, as Guardians fans, our relationship with our shortstop can go to another level of affection, just as the Giants fans’ love affair with Daniel Jones has, with some small adjustments to fully realize his offensive skillset in 2023.