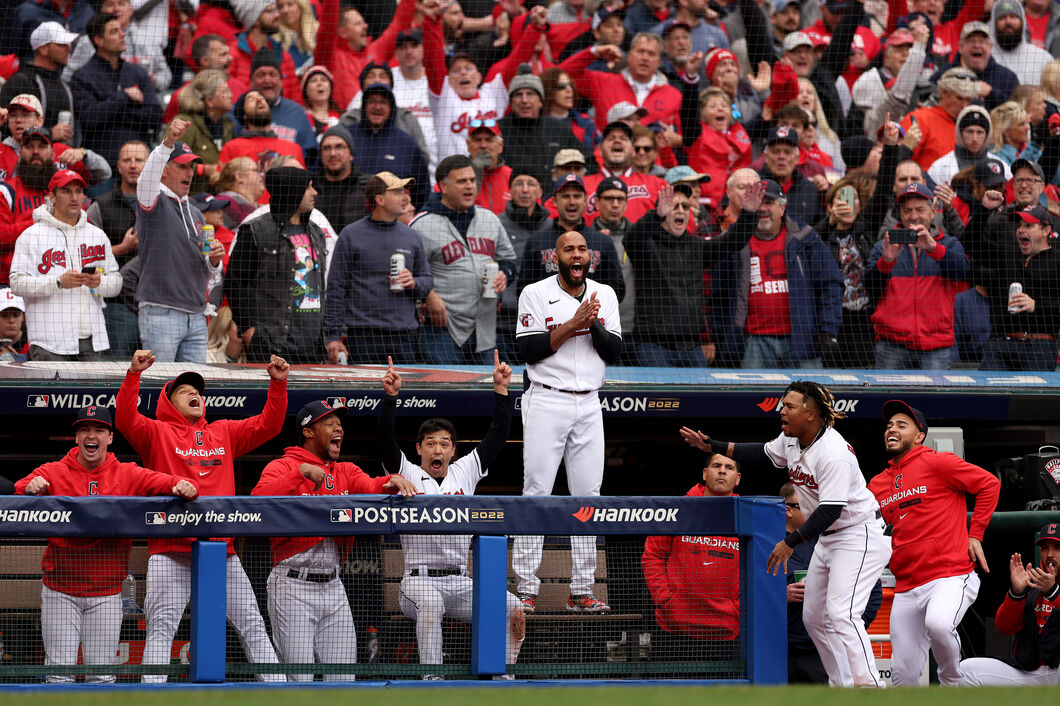 It goes without saying that this season was a massive success for the Cleveland Guardians. Entering a new era of Cleveland Baseball, this organization exceeded all expectations set by the majority of the fandom as well as the oddsmakers. The young guys in our system developed quickly, which added some much-needed willpower to this team. You could look at any facet of this team and see talent that will push this team into serious contention. Furthermore, the Guardians have one of, if not the deepest farm system in the MLB, which sets their future up very nicely. When it comes to the offense, starting pitching, bullpen, coaching staff, or Cleveland's farm system, the Guardians bring a lot to the table when it comes to developing an organized ballclub.

To start, the offense did wonders compared to last season. The offense was powered forward by young, hungry hitters. Names such as Steven Kwan, Oscar Gonzalez, and Andres Gimenez really brought a great deal of electricity to it. This young talent, compounded with the familiar faces in the lineup as well as a new hitting coach, pushed this offense past pretty much every other one of the sort in the AL Central.

Not only did this offense improve ten-fold, the Guardians' pitching staff continued to impress as well. The rotation, for the most part, did fairly well. The 1-3 starters mainly showed out and established themselves as a force in the AL. Triston McKenzie quickly made the leap from a #3/4 starter to possibly a second ace to Shane Bieber. It is also unfair not to mention how reliable Cal Quantrill was. Cal was a reliable contact pitcher who racked up a large amount of wins throughout the course of the season.

To take things further, the Guards' bullpen was a sight for sore eyes. For a group of relievers who had trouble finding their identity in the 2021 season, the Guardians bullpen did a spectacular job in quickly emerging as a top-tier set of arms. There are just too many names to go through; no matter who you look at, you can be completely sure that they will be reliable. Just to name a few, relievers such as Karinchak, Stephan, or the fireballer that is Emmanuel Clase all grew into elite arms. And these guys are just the tip of the iceberg. Every reliever in this bullpen made their fair contributions to the ballclub. The bullpen helped in relieving much of the weight that was being held by the rotation (especially the back end of it) down the stretch of the season. Nevertheless, they have really shown how they have grown since 2021.

Now, you cannot review this squad without recognizing the managerial masterclass that Terry Francona put on display this season. He was the glue that held this young squad together. Tito knew what he was getting into, and he had some rough spots along the way trying to learn how to manage this very young and inexperienced ballclub. However, Francona helped the Guardians in quickly becoming a threat to the AL.

Last, but not least, the Guardians' farm system is a very considerable factor to Cleveland's future. The Guardians' farm system was recently ranked third in all of baseball. In fact, almost every hole in the lineup will potentially be filled with prospective talent. Prospects like George Valera, Bo Naylor, Daniel Espino, Brayan Rocchio, etc. are very close to being league-ready and playing for a team that is already on an uprising. Once these guys come up, they will provide much-needed support for a team that does have a few holes. Furthermore, the Guardians front office can possibly utilize some of these prospects for trades. To conclude, the Guards have many possibilities to bolster their already strong squad. Whatever move they make in terms of prospects will most likely be the right one.

Looking Back on the Season

I think everyone can agree when I say that this was a magical season. Coming from a person who, at first, was extremely disappointed by the name change, I can confidently say that it was necessary. For whatever reason, the name change not only brought a new identity to the organization, but it brought a new identity to the squad as Cleveland moved into a new era of baseball. Whether it came from prospects, a change to the coaching staff, or a small sample of new signings, this team started to develop its own, exclusive brand of baseball. Given the chances of this happening, the only motif that could be drawn from this season is one that emphasizes magic. Being a familiar motif to the corner of Carnegie and Ontario, it became very prominent this season and could be observed as the forefront of the Guardians' success this season. For me, I believe that this very unconventional, but organized ballclub helped me buy into the new name. It is obvious that Cleveland is moving on from the old name with this new team and is opening a new window for contention. In short, we have a lot to look forward to in the future with this young team and deep system.