During the dog days of the lockout, I did a deep dive on every outfield Cleveland has employed during the Jacobs/ Progressive Field Era (1994-present), which can be found here. At the end of the exercise it was abundantly clear that the club's recent approach to assembling an outfield really hadn't worked at all post-2016. Something had to change, something had to give. Thankfully, something finally did! Let's take a look:

Above is a table similar to what I used in my last post with cumulative numbers the outfield put up in 2022. If you go over to the far right column and see the total fWAR, you'll see a fairly healthy total of 7.5, and it's pretty evenly distributed across offense, defense and base running. The 96 WRC+ is also serviceable all things considered. For further context, let's also look at the numbers from the 2021 outfield as well:

Yuck, yuck, and yuck. Remember that these would've looked even worse if not for the acquisition of Myles Straw at last year's deadline. So what changed? Let's break this down further and look at the individual players who made up the 2021 and 2022 Cleveland Indian/ Guardian (did I mention I love the rebrand? Because I love the rebrand) outfields:

Okay, so the obvious answer is personnel change. The Bradley Zimmer Era (RIP Matt Lyons Waluigi memes) mercifully came to an end this spring after lots of tantalizing promise but very little payoff. Daniel Johnson ended-up being Zimmer-lite (a truly depressing fate for a player) with a somehow worse contact rate and was quickly scuttled from the org. Jordan Luplow and Eddie Rosario both became trade bait at the '21 deadline after disappointing seasons marred by injury and underperformance. Josh Naylor became a full-time 1B/ DH and fared much better there for a multitude of reasons. Harold Ramirez was a fun hypothetical for a bit but not good enough to justify his sub-par glove, he predictably caught-on with Tampa Bay after getting DFA'ed by Cleveland. Ben Gamel ended-up with the Pirates and is now like their third best player, which says more about the Pirates than Gamel. Myles Straw and Oscar Mercado were the only holdovers from the 2021 outfield, and Mercado was off the roster for good in early July.

So who are these guys that sparked such a turnaround? Much has been made of the Guardiac Kids and the many rookies who debuted this year and their penchant for the comeback win, funny enough a lot of them were primarily outfielders. A quick rundown:

Former first round pick Will Benson appeared to have made meaningful changes at AAA this year and finally made his MLB debut, but those changes didn't translate into much success. I'm not sure of what exactly to make of Benson at this point, but he's still only 24 and needs more regular playing time before a thoughtful opinion can be formed.

Richie Palacios has a good contact tool and is a rare bespectacled ball player. He was a decent bench bat and sparked several notable comeback rallies as a pinch hitter. Ultimately I think he'll be trade bait this offseason, as there are better versions of him with similar tools already on the 40-man roster.

Alex Call was an old rookie who got a look after raking at AAA but when that didn't produce results at the MLB level, he was then banished to Baseball Purgatory, which currently resides in our nation's capitol.

Nolan Jones is a guy I've been high on for a long time. He raked upon getting his initial call-up (following an obligatory hot stretch at AAA) and showed flashes of his tremendous power, but quickly tailed off as pitchers got a book on him. I still think he can be a good big leaguer, but may get squeezed out as part of the roster crunch, he could also be another tantalizing trade piece.

Will Brennan was a better, younger version of Alex Call who got a look at season's end after playing very well at AAA (see a recurring theme here?) and raked at the MLB level to close out the season. Brennan has a fantastic contact tool but may have gotten some help from facing sub-par pitching in the limited MLB action he saw, on the other end of the spectrum he looked very overexposed in the playoffs and seemed to have problems catching up to high velocity pitches.

This brings me to the two players I really want to talk about.

When I last wrote about the Cleveland outfield, I half-joked about finding a new Belle-Lofton-Ramirez trio. The Guardians may have actually found 2/3 of that vaulted triumvirate already.

Going into 2022, there was a lot of genuine excitement over Steven Kwan both amongst Guardians fans and the larger online MLB community as a whole. He had made noted improvements in the minors in 2021 and looked ripe for a breakout. All he then did upon making the OD roster was put up the best rookie season by a Cleveland player this side of Francisco Lindor in the last thirty years. He won Rookie of the Month in April and September and was pretty good in between outside of a cold-spell in May. He also wasn't half bad in his first taste of the playoffs either. On a related note, let's compare some slash lines and other stats, shall we?

Seem familiar? Player A is Kwan. Player B is 1992 Kenny Lofton (I picked that 30 year cutoff very specifically). The overall numbers are very similar, Lofton stole more bases and played better defense (though I do think FG is underrating Kwan's glove) while Kwan had a better slash line both in the aggregate and when looking at adjusted stats. This bodes very well for his future. Now let's look at one more outfielder...

There is a universe where MLB doesn't lock out it's players, the Rule V draft happens, and Oscar Gonzalez never puts on a Guardians uniform. I am very glad this universe doesn't exist. Ultimately, after having a breakout 2021 in the minors where he slugged 31 home runs between AA and AAA, he re-signed as a minor league free with Cleveland going into 2022 and made his MLB debut in May and immediately started hitting. As the season wore on, Gonzalez started to tap into his power and really helped carry the team down the stretch in September. He also had two walk-off hits during the 2022 postseason that will live on in Cleveland sports lore for many years to come. Did I mention he also has a thing for SpongeBob Squarepants? Anyway, let's do another stat comparison:

Now this one's a bit more of a stretch, but role with me for a minute. Player A is Gonzalez, Player B is 1994 Manny Ramirez. The overall production looks very similar--same number of games played, almost the same fWAR and WRC+. The shape of said production looks a bit different though, Oscar walked way less but made more contact and played a little better defense (largely due to his Spartan Laser of an arm). Manny walked more and hit for more power. It should also be noted Manny was two years younger, so the error bars for improvement aren't quite the same. Obviously some of what Oscar did doesn't look terribly sustainable, a BABIP of .345 with a sub-5% walk rate is genuinely concerning. Nonetheless, let's dig a little deeper. 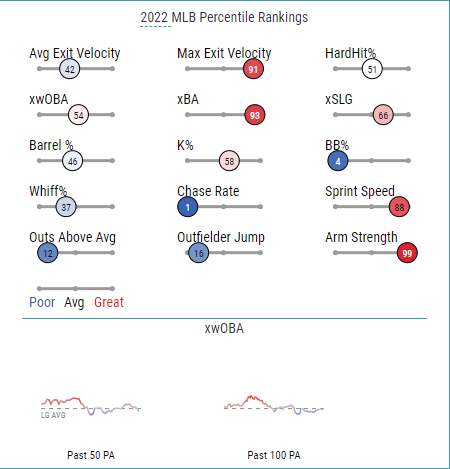 These are Oscar's StatCast percentile rankings, courtesy of Baseball Savant. To put it bluntly, he hits the [snot] out of the baseball and it allows him to rack up extra-base hits, whether that's by hitting the ball so hard it bounces off an outfield wall/ clears the wall entirely, or by screaming down the first base line and legging out hits. He also makes up for the sub-par walk-rate by running an above-average strikeout-rate. The raw tools are there for a really special player. If he can make some adjustments to his swing profile to hit for more power while maintaining the kind of contact he showed in 2022, a Manny Ramirez comp isn't nearly as outrageous as it might seem at first blush.

Ultimately, this Guardians team has some work to do in the offseason (cough trade for Shohei Ohtani cough) to build a sustainable winner, but they made huge strides this year, and it all started in the previously much-maligned outfield. If Gonzalez, Kwan, and others can continue to make improvements, this could become a really special team. Will Kwan and Gonzalez become Kenny Lofton and Manny Ramirez respectively? Odds say probably not, but with baseball you never know, and the early returns have certainly been promising.