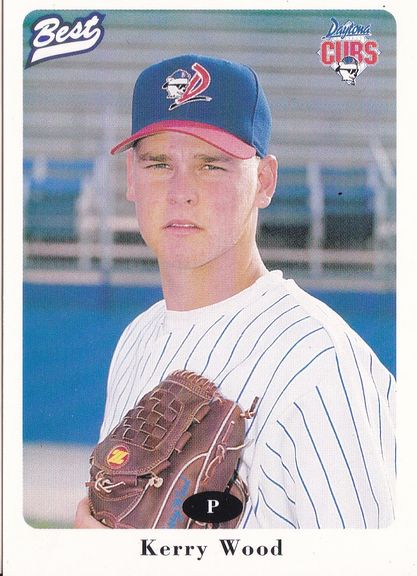 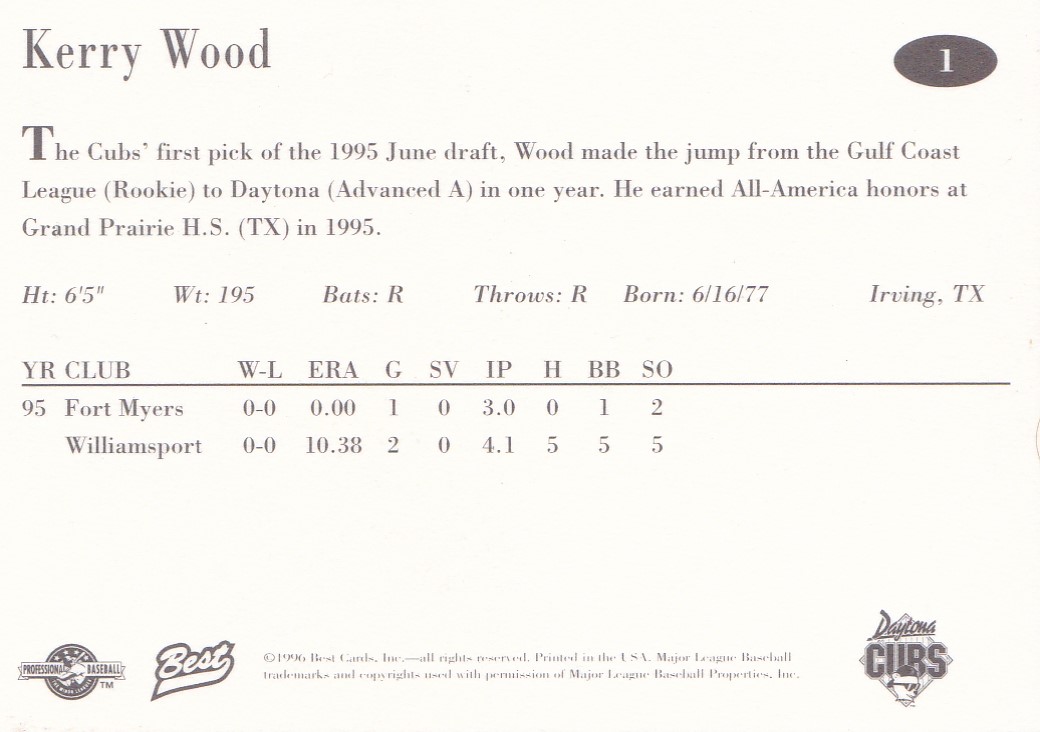 Is this his rookie card?

Technically, Wood's best rookie card would be his 1997 Bowman #196, which was a pricey card for a while. He has a card from 1995--Best #130 while he was with the GCL Cubs—but I am not a big fan of these Best sets. For my MiLB-card collecting purposes, I like the first MiLB team issued card if I can help it.

Is this card actually worth anything?

Not really. I paid less than a dollar.

Anyone else fun in that set?

The 1996 Best Daytona Cubs also had the first card of RP Justin Speier. He was with Cleveland from 2000-2001. He was a great pen arm in 2000 (68.1 IP, 150 ERA+), but struggled in 2001 and was traded to the Rockies for OF Brian Jenkins. In retrospect it was not the best trade. Speier would pitch great with Colorado for the rest of the season, and end up sticking around in the majors for eight more years and was a well-above average pitcher for most of them. Did you know he was also in the Marine Corp reserve?

OF Bo Porter was also in the set. He spent parts of three seasons in the major leagues in the early 2000’s, and would manage the Astros from 2013-2014.

When this card came out…

Wood would go 10-2 with a 2.91 ERA/1.24 WHIP for Daytona in 1996. He struck out 136 in 114.1 innings, and was the starting pitcher in two combined no-hitters. He would enter the 1997 season the Cubs #1 prospect, projected to be a #1 starter at the big league level. His scouting reports did mention that he had a "tender elbow" and he missed a month of the 1996 season. That elbow would, eventually, need Tommy John surgery and be a recurring issue throughout his career.

He was with Cleveland?

Wood was signed to a two-year, $20.5M contract back in 2008. The idea was that Wood, whose days as a starter were long behind him, would replace the always exciting Joe Borowski as closer. Wood was solid in his year and change with Cleveland, but the injury bug would hit and wipe out the majority of his 2010 season. The good news? The injury opened the door for RP Chris Perez, who held down the closer job for the next several seasons. In July 2010, Wood was traded to the Yankees for RP Andrew Shive and 3B Matt Cusick—neither would ever even play in the Cleveland organization.