Again, I want to thank Chris Creamer’s Sports Logo Page, for helping me navigate all of these images.

After starting with the Block C for the first two decades, and oddly switching to the Round C after winning their first title in 1920, the third type of C was introduced in the 1933 season. The home cap used a Wishbone C that was red on dark blue. In 1937, the road cap introduced a white version of this Wishbone C on the dark blue cap. 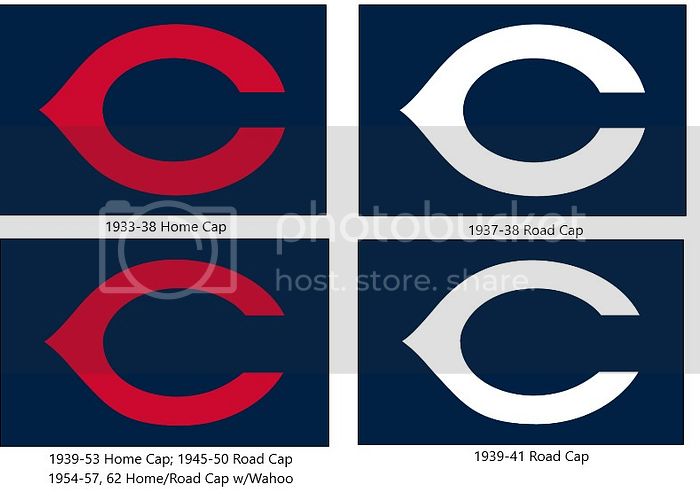 Oddly enough, the home jersey introduced in 1933, the Wishbone did not match what was used on the cap. It was thinner than the cap, with the wide mouth, but more significantly round than the cap. It also used a blue trim as it was on the white home jersey. So from 1939 to 1945, the jersey almost matched the cap, but was still a slightly different logo (rounder).

If you noted a gap above from 1958 to 1961, that is because they used the same wishbone, but instead used a white trim. This was also used in 1963-1964 and again from 1970-1971. A reversed Wishbone was introduced in 1965. This is because the cap switched to red, so the C became dark blue but maintained the white trim. In was used through 1969, and again in 1972, which would be the last instance of the Wishbone C for Cleveland.

To complete the Cleveland C logo story, I also included the "Greek" C that is adored (irrationally?) by a lot of fans. It was used from 1973-1977 until the Block C was reintroduced. 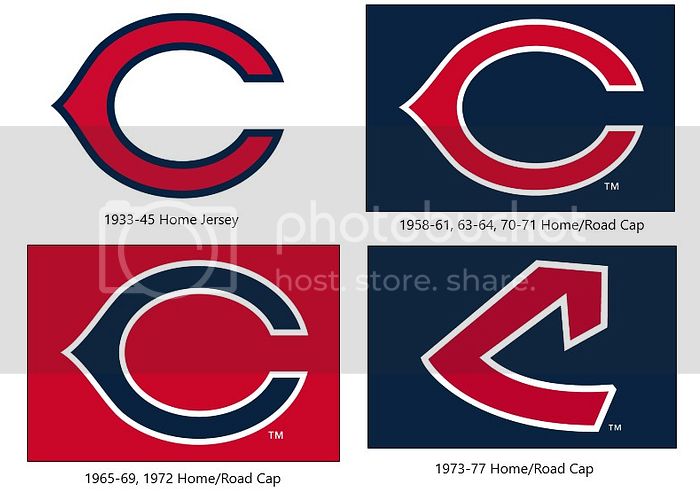 Before diving into the Cincinnati Reds use of the Wishbone C, let’s first take a look at the Chicago Cubs first. They used a version that eerily looks like the Chicago Bears from 1916-1936. They did adopt a version very similar to what the Tribe wore, from 1930 through 1936 on the caps. Again, very weird that the caps did not match the jerseys. From 1937-1939, they dropped the spur on the left side and made the C much rounder for the cap. Then in 1940, they switched back to the spur and adopted the current Cubs blue. And also from 1940-1956, that cap was used with the Round C logo on the uniform from the last post. A complete mismatching of C’s for 16 seasons. 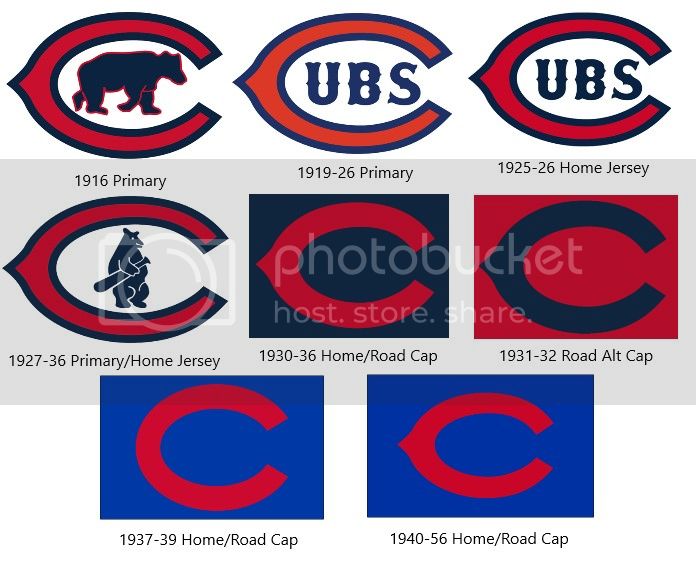 The first time the Reds used the Wishbone was in 1913 and to me it looks much more like a horseshoe. In 1914 they had a rounder wishbone C and from 1915-1919, the C looks a bit more like their current version, but was still fairly round. The 1920-1938 Primary logo looks even closer to the current version, but had a very narrow opening at the mouth. The 1934-1936 logo was much fatter. From 1939-1952 the Primary logo switching from back to another version of the more traditional wishbone, albeit with white and blue accents. But the caps were totally mismatched from 1937-1954 with a taller, thinner wishbone, but back to the wider opening. 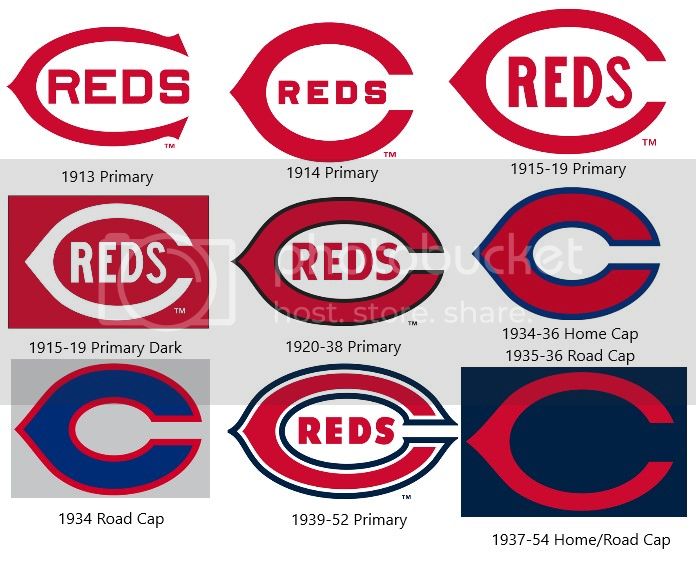 The Reds finally settled on their current version of the wishbone in 1956 and then made some tweaks here and there through 1992. The only deviation occurred from 1961-1966, when they dropped the spur, but kept the rest of the wishbone shape. 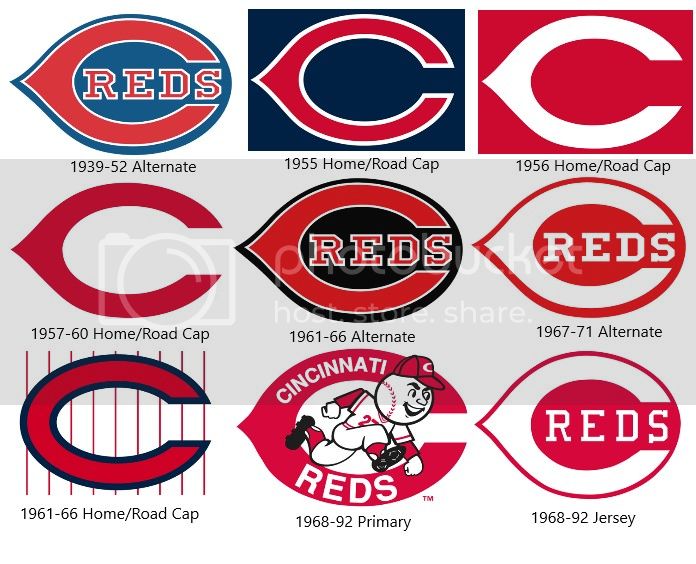 The final image also shows the other slight changes from 1992 onward. The important change was the addition of the shadow in 1999. 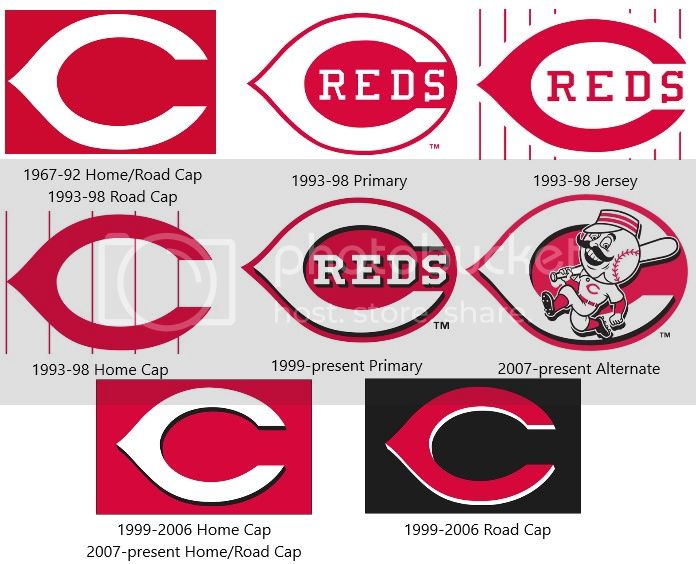 Even though the Reds did adopt the Wishbone C first, both Cleveland and Cubs did use version of the Wishbone for quite a long time, before dropping them in 1972 and 1956 respectively. I do like Cleveland’s version of the Wishbone better than the Reds. I am especially partial to the 1933-1945 home jersey version. But I do understand why Cleveland did drop their Wishbone, because it did look too similar to Cincinnati’s and that the Twins had also adopted a Wishbone of their own.

Up next, Part 4: Conclusion