Continuing with my previous post (The Letter C in Logos, Part I: the Block C), we shall now delve into the different type of Round C’s teams have used.

In a surprising development, based on the logos I have found at Chris Creamer’s Sports Logo Page, Cleveland has now used the Block C in 45 seasons (out of 121). That is more than I had imagined, but makes sense since it was the primary logo for the first score of years as well as the last decade plus. It even was the logo used the year of the initial Championship in 1920.

But oddly enough, in 1921, Cleveland rebranded their logo to a rounded C with a spur on the left side in the middle (similar to what will be seen in the next post – Wishbone C’s) and a split at the upper arm end. I like to simplify this as the "Fancy C". The thicker version was used as the Primary logo from 1921-27, blue letter on white background. However, this was a White C on dark blue on both the Home and Road Caps from 1921 to 1932 as well as the Road Cap from 1933-36. It was also used as an alternate cap in 1941. The exception was the 1921 Road Cap which was a black cap instead of dark blue. There was also a thinner version of the blue Fancy C on the Home Jersey from 1922-1927. 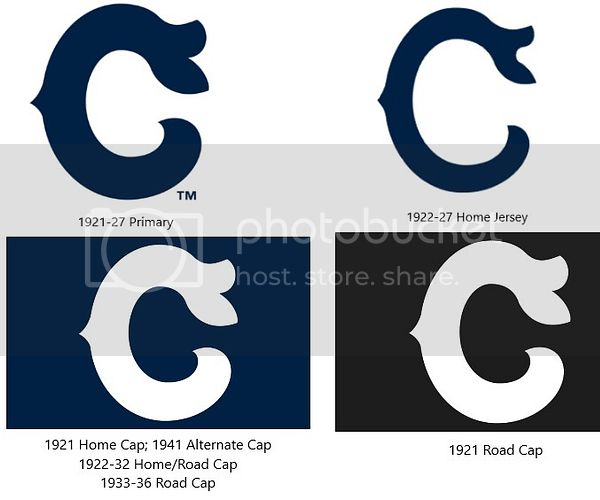 Sidebar: Even though the next image is not of a Round C, this seems like the best fit for the Cursive C’s, which were used as the Primary logo and on the Home Jerseys from 1905 to 1909. 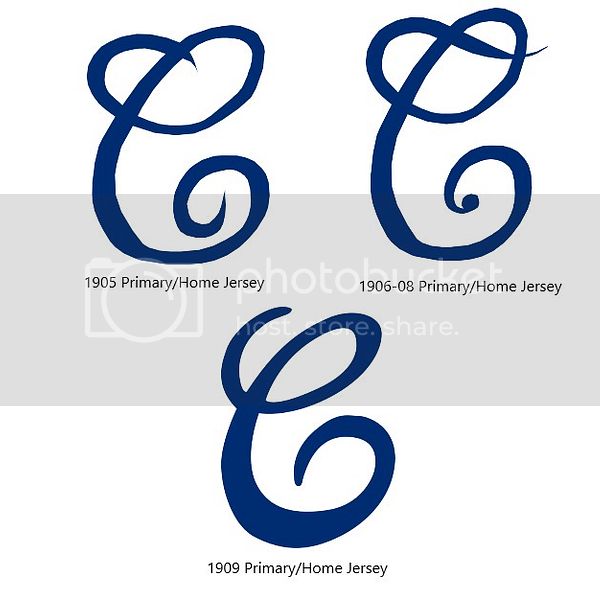 In 1905, the Cursive was a single stroke, with the upper arm an unfinished "pretzel" and the bottom arm circling inward. That changed in 1906 (thru 1908) to an upper arm with a full "pretzel" and the lower arm not as curled, but with a ball at the end. The best version was actually the 1909, where the curves looked like a repeatable single stroke.

I could not find any other MLB franchises with a Cursive C, so we shall return to the Round C’s.

The Cubs used a thicker version of Cleveland’s Fancy C in 1931 as a Home Alternate Cap, a white C on dark blue. It had two spurs on the left and a split on both arm ends. The alternate Home/Road Cap in 1934-1935 switched to red, was a bit thinner and didn’t have the split, but did have a swash/spur on the upper arm.

The Reds used varying versions of the Cubs Red Fancy C from 1914-31 on their caps. The Reds did have Super Fancy C’s from 1905-1911 of varying degrees. The 1912 version was a lot taller and thinner than anything the Indians had done (it actually looks more similar to the Block C in that regard. 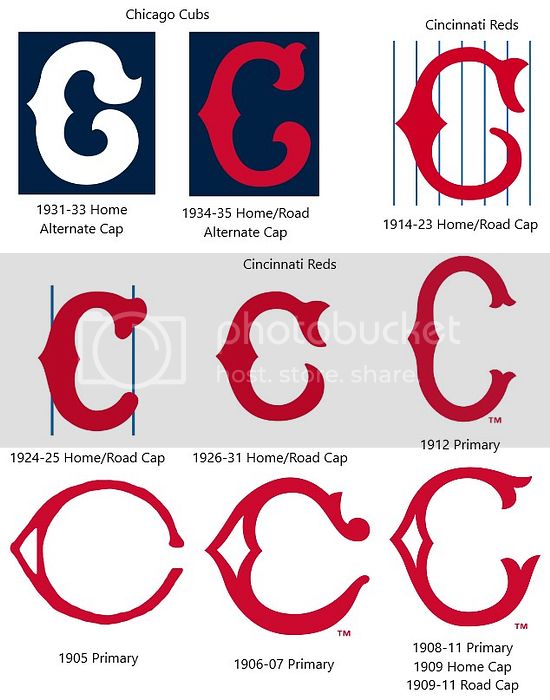 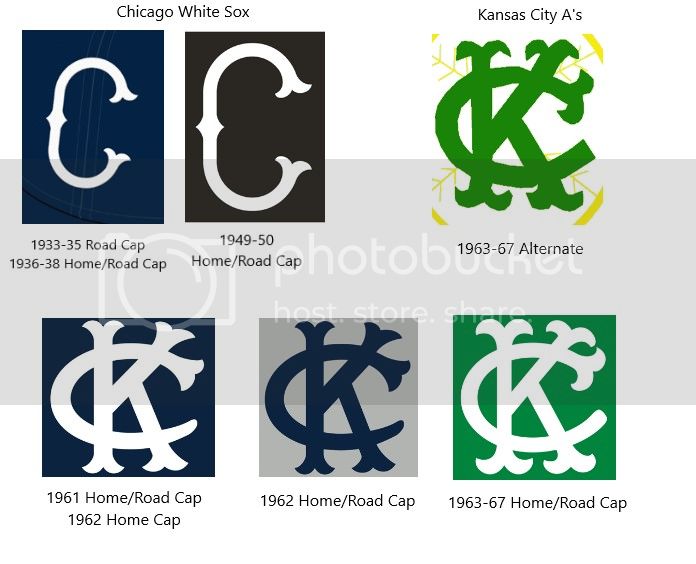 The Cubs were actually the first to use a Fancy C in 1907, dark brown on white. This only lasted a single year. 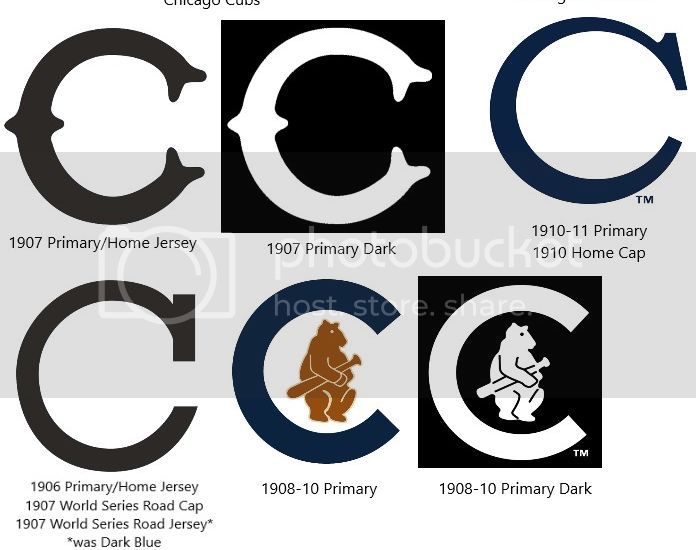 Also included on the last image is the start of the non-Fancy C’s. The Cubs used a typeface Round C with a serif on the upper arm in 1906 (and in the World Series in 1907). The White Sox used a similar typeface C in 1910-11. The first appearance of the Round C (that is very close to their current C) was in 1908.

Some colors changed and changes to the inner logo occurred from time to time. The alternate cap from 1934 and home jersey from 1934-1937 veered more towards the Fancy C. 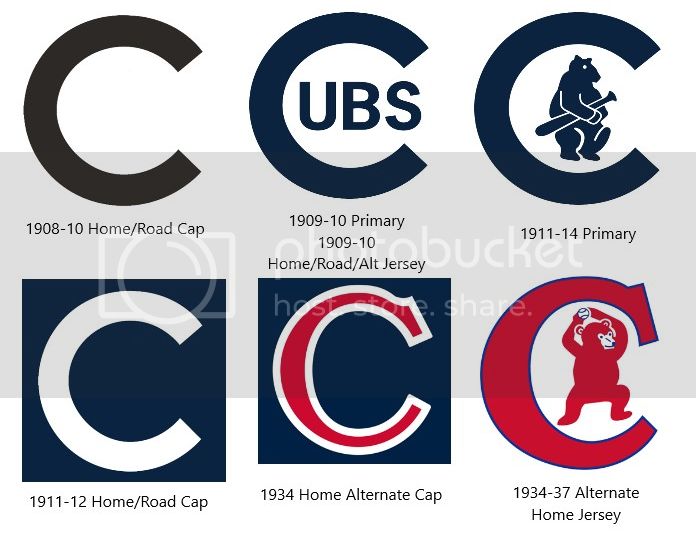 They finally settled on the current style of the logo in 1937 and has been used with slight alterations ever since. 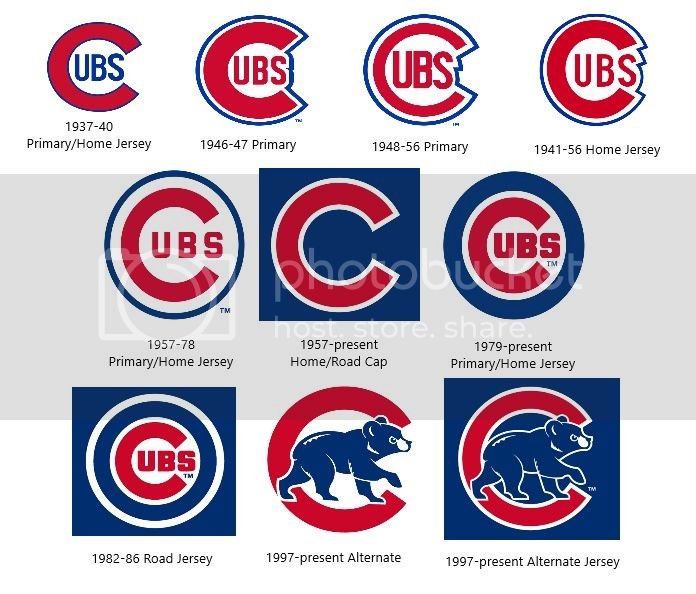 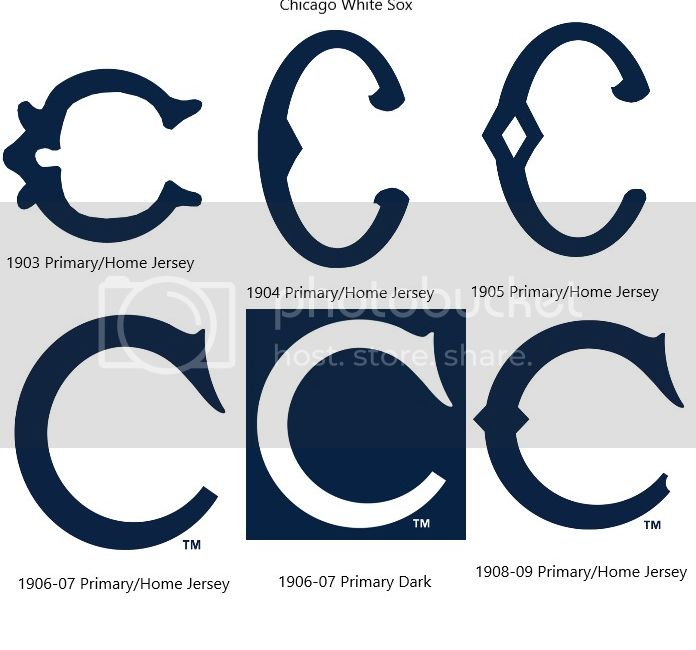 Other Round C’s include the Reds from 1901-1904 and 1932-1933. I have also included the California Angels and Colorado Rockies logos for completeness. 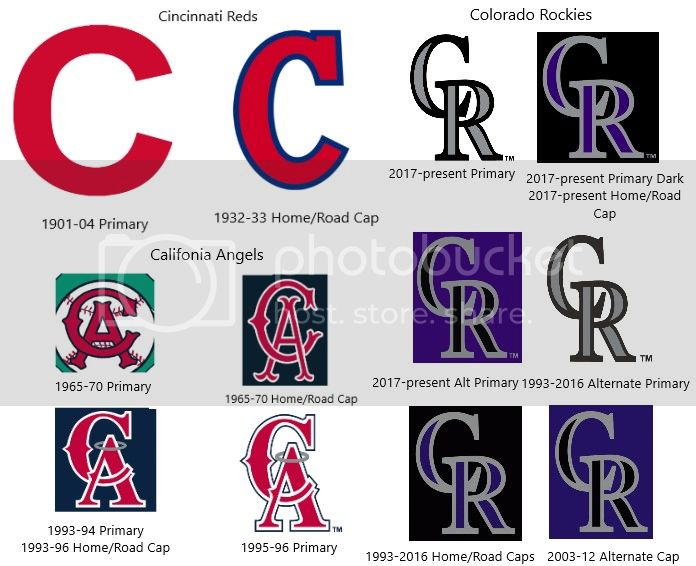 Other teams that did use Round C’s include the KC Royals; the Chicago Federals and KC Packers from the Federal League; and the Chicago American Giants, Cuban West Stars and Kansas City Monarchs in the Negro National League. Note: On further review the Monarchs logo is more of a Block C. The Chiefs from the NFL was the only other Round C I identified, although there were a few NHL teams that would also qualify.

In summary, I do like the Cleveland Cursive C from 1909 the best, but I doubt this would be a good choice because it does not appear to be an easily repeatable image in my opinion. I really do like the Cleveland Fancy C as well, but it was only used in 17 seasons. I think it would make an excellent alternate logo or alternate cap to be used. Even though other teams have used different versions of this Fancy C, it was never for long stretches by any of them, whereas Cleveland used it for 16 consecutive seasons.