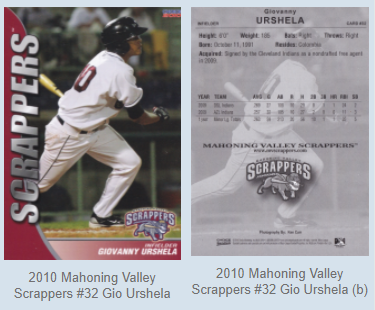 Is this his rookie card? Nope! This is his first minor league card. If you want his first true rookie, that would be 2015 Topps Update Baseball #US74. Or, if you like the higher-end stuff, his 2015 Bowman Chrome Prospects #BCAP-GU is a good one too.

Did I have trouble finding it? I did not have this set before the 2018 season. It was not until he broke out with the Yankees that I noticed a hold in my collection, and went after it. Of course, by then, there was a premium on the set. Unlike some cards, I don't like to wait on MiLB cards to drop in value since they can be tough to find later, so I ended up paying to going rate of like $20 for the set.

Anyone else fun in that set? Not really. There is a Travis Fryman card since the former Tribe and Tiger great was the team's head coach. There is an outfielder named Diego Seastrunk in the set, who was the Indian's 14th round pick out of the 2010 draft. I remember nothing about him--he was only with the organization for one season--but what a fun name. Oh! Carlos Moncrief is in there, his first card. I remember having a bit of a prospect crush on him back in the day. I don't think I was alone.

So when this card came out…Gio Urshela was an 18-year old in his second season in the pros. In 2010, with Low-A Mahoning Valley, he hit .290/.326/.367 with 3 HR. What people noticed was his defense, which was already projected to Gold Glove-caliber. His 2010 season was good enough to let him crack the organization's Baseball America Top 30 prospects (at #30), where they expected him to become a glove-first third baseman with the potential to add a little bit of power to his game as he got older.

How did things work out for him? I think we all know the story pretty well by now. Gio made the majors in 2015 but had a disastrous playoff performance—with his glove of all things—during the 2017 ALDS against the Yankees. It did not look like his bat was going to come around, and in May 2018 he was traded to Toronto. I really, really can’t blame the Cleveland brass for moving on. Case in point: roughly 20 games later, the Blue Jays did the same thing, trading Urshela to the Yankees. Of course, he broke out for a career season in 2019, hitting .314/.355/.534 with 21 HR, and put up similar numbers in 2020. This year was a little rough (.314/.355/.534 with 14 HR), but still. Good for him. Wish he had popped in Cleveland and not New York, but I understand how we got here.