6 takeaways from the Indians’ rough season opener in Minnesota

It’s too early to make any assumptions, but things still happened this weekend and some of them weren’t pretty

Share All sharing options for: 6 takeaways from the Indians’ rough season opener in Minnesota

We all watched it. I don’t need to mince words or sugar-coat anything — the offense looked bad.

Through the first series against the Minnesota Twins, their one real foe in this year’s AL Central race, they whiffed 39 times, led by Tyler Naquin’s incredible six strikeouts in seven at-bats. There’s not much left to tell about the offense’s ineptitude beyond that. Missing Francisco Lindor and Jason Kipnis hurts like hell, but they’ll be back eventually. So will Jose Ramirez’s bat. But right now, they’re a tough bunch to watch every night.

It wasn’t all bad, though, believe it or not. Corey Kluber and Trevor Bauer both looked great, and Brad Hand looked like a real closer, even if his defense didn’t want to give him any help in game two of the series. There were also some reason to optimistic sprinkled throughout the toilet water that soaked our televisions over the weekend.

Here are some takeaways from their one win and two very different, yet equally devastating, losses.

Seriously, you play in Minnesota, Twins. Get a roof or something. Go back to a dome, I don’t know. The Indians played in sub-40 temperatures in all three games, and as expected it looked extremely uncomfortable to hit, and difficult to pitch.

Trevor Bauer actually said the cold helped his new deadline changeup, so maybe it’s not a total loss pitching in cold Minneapolis weather, but it still never feels quite like baseball. And, to be fair, the Indians will be doing the same thing when the start their series against the White Sox this afternoon with an expected temperature of 35 degrees at first pitch. Getting every team their home opener within the first week of the season is one thing, but maybe it wouldn’t be so bad to push it back for teams in the north without roofs. I’ll enjoy a home opening series on April 1 just as much as I would on April 10. Just saying.

None of this explains or excuses the lack of the depth on display with the Indians lineup, however. The Tyler Naquin experiment probably needs to now, and Max Moroff is not the solution at shortstop, even temporarily.

Roberto Perez is really good behind the plate

Was there ever any doubt? Whether or not you believe in Roberto’s ability to hit the ball, the Tribe’s newly appointed starting catcher is an absolute ace behind the plate, and he showed why in the opening series. Most notably, he blocked several balls in the dirt for Trevor Bauer en route to a one-run afternoon and eventual win against the Twins lineup.

His framing was also on point that game, aside from one egregious ball which no amount of framing would possibly be able to save if the home plate umpire is going to work the plate with his eyes closed.

In game one, with Corey Kluber on the mound, Roberto made sure his pitcher got all the pitches on the edge of the zone, though he and Kluber gave up on the bottom half pretty quickly with the balls being called.

As for his bat, Roberto Perez isn’t out there swatting dingers, but he is soaking up pitches, which is what he has been best at when he’s the most effective. He saw 5.00 pitches per plate appearance in his two games, fifth in the American League. It wouldn’t be at all surprising to see him near the top of this leaderboard all season long.

Carlos Santana is back

I’ve never been happier to type those words. Our son is home, and he seems happy about it.

Carlos Santana loves Cleveland, to the point that he never sold his local home when he signed the Philadelphia Phillies last offseason, and now that he’s back he’s pick up right where he left off. If he is the type of player that relies on comfort to be effective, it appears that being back home is the trick to recovering from the worst season of his career.

In the series finale on Sunday, Santana had the hardest-hit ball of the game at 112.8 miles per hour when he doubled in the eighth inning to prevent the shutout. Santana also had the second-hardest hit ball by an Indians player at 108.3 miles per hour. And, oh yeah, the third-highest with a 102.6 mile-per-hour single in the second inning. Let me check my notes, and yep, also had the fourth hardest-hit ball with a 99.9 mile-per-hour single in the fifth inning.

Santana went 5-for-10 in the series with a team-high three runs batted in and he was the only batter with at least three at-bats to not strike out in the entire series. Not to exaggerate or anything based off one good series, but I hope Carlos talks about this series when he gives his Hall of Fame acceptance speech.

Hanley Ramirez can, in fact, still hit the ball.

I told you. Didn’t I tell you? Hanley Ramirez can whack it.

The only real notable addition this offseason, Ramirez provided some much-need power for the Indians over the weekend. His 416-foot moonshot in game two gave the Indians their only home run of the series, as well as a lead they would never give back on the way to their first and only win.

Ramirez’s home run was hit 113.8 miles per hour (barely ahead of, yet again, Carlos Santana’s 111.8 mile-per-hour single in the ninth) and tracks with the hard-hitting he displayed in his recent down years. The question will be whether or not he can maintain it over a full season, and if he can actually lift the ball enough for it to matter.

It me, your resident bunt hater here to tell you that bunting against the shift is actually good. If teams are going to give you an opening to get a free base every time, take it. Either you break the matrix and get a hit every time you come up to the plate, or the team will stop shifting on you.

That’s exactly what Jose Ramirez attempted to do multiple times this series. Unfortunately, he failed every single time and made himself look silly in the process. It didn’t have to succeed for it to have its desired effect, however. After leaving third base completely vacated in the first two games of the series, the Twins came out with a fielder hovering closer to third base in Jose’s first at-bat of game three. After the first strike, when a bunt became less likely, they left third base wide open again. 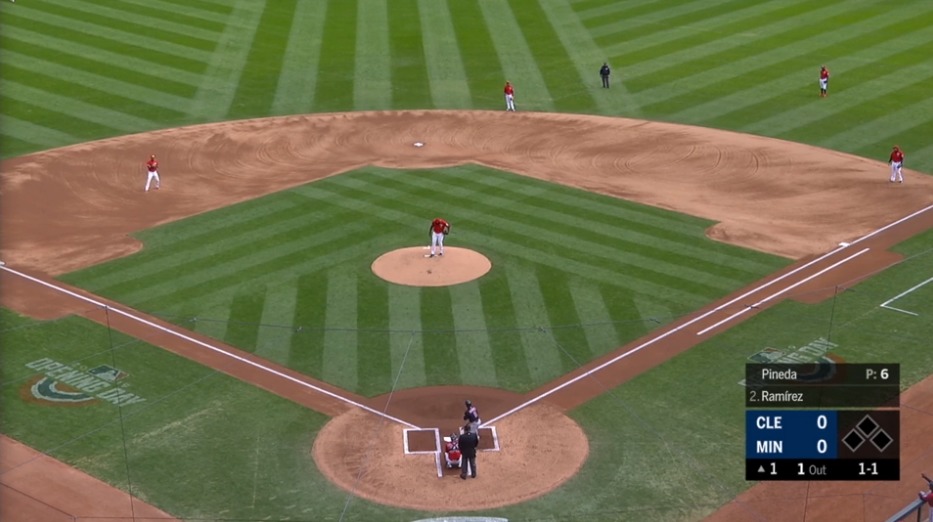 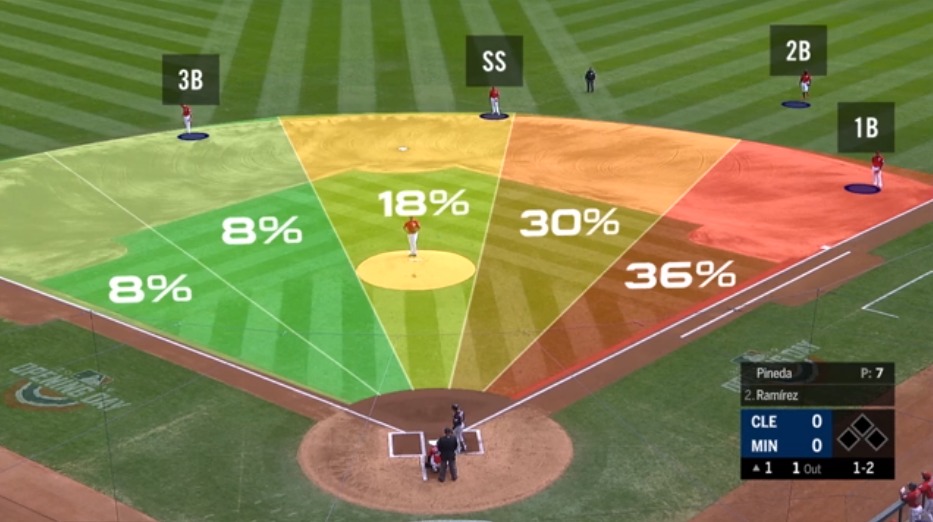 (Note: There’s a strike in the pre-shift image above as the broadcast was showing how the field looked before the strike)

If Jose can actually learn to get those bunts down, he might finally be the prophesied hitter to bunt against the shift and stop opposing teams from shifting on him.

Part of me wishes Jose came out with an immense amount of swagger and just hit the ball the way he knows how, spitting in the face of the shift and flipping his bat to immortality, but it’s also interesting to see him coming out in the first series of the season, knowing how teams are going to try and beat him, and then trying to counter it.

No more fitting way to end this series recap than to take a look at Trevor Bauer’s excellent new change-up.

He reportedly decided he wanted a change-up and then just crafted it in the offseason (because that’s what normal human beings, you know), similar to what he did with his slider last year. Early returns on it look really, really good.

Bauer wasn’t shy about using his new pitch in his first start of the season, either. He threw it 25 times for five swinging strikes (the most of any of his pitches on the day), and four called strikes.

Just look at this thing.

Trevor kept it way, way out of the zone most of the time, which speaks to his confidence in his catcher, Roberto Perez, to keep the ball in front of him. Which he did.

Things can always change in a hurry, especially when the weather warms up, but right now Trevor Bauer’s change-up looks like it’s right on track.