Note: This news and notes refuses to discuss Brandon Moss

• A boatload of ESPN puppets made their playoff predictions and none of them picked the Indians as a wild card. Former ESPN employee Terry Francona is hard at work making that prophecy hold up.

• Francisco Lindor and Carlos Correa headline "a new golden age for shortstops in the American League." Can Lindor catch Correa in the AL ROY race, though?

• Yan Gomes was the first player in 8 years to hit two game-tying homers in the 7th inning or later.

• Ryan Raburn is still alive, as far as I know.

• "Chickenpox hits Royals clubhouse; Kelvin Herrera, Alex Rios infected" / That right there? Real headline. Hopefully they'll be healthy enough from the 7th until the 13th to go 6–0 against the Twins and Orioles. Then get swept by the Cleveland team the 14th, 15th, 16th and 17th.

• Zack Greinke faced Madison Bumgarner last night. Greinke allowed 1 run in 7.1 IP and now has a 1.59 ERA. The NFL would punish his unbelievable numbers with a rule change. Joc Pederson homered late in the game off of Bumgarner. The list of pitchers Pederson had homered off of wasn't very impressive before that one.

• The Dodgers gave Jake Arrieta the pitching rubber from his no-hitter. It weighed 60 pounds; who knew!?

Tribute to Mark Shapiro Not Being a Fan of the Clecommers 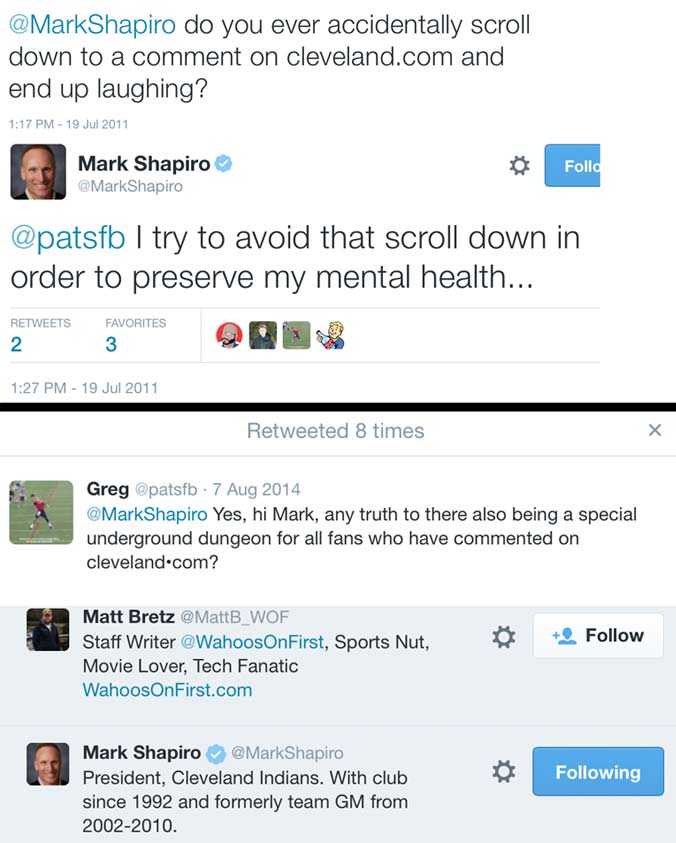