Look at KC's starting rotation and try to make sense of them having the best record in the American League.

Yordano Ventura, savior of the Royals pitching staff, was optioned to AAA. Jerry Sands better watch his head. Ventura owns a 3.69 FIP and 3.68 xFIP, but Dayton Moore has no room for that 5.19 ERA on his roster.

• After stories appeared that the Tigers may be in full sell mode, we now have one saying the opposite: THE TIGERS ARE BUYERS!? That may have changed again, though. More on that later.

• Mike Trout's perfection suffered a tiny blow Tuesday—he was out of the Angels lineup with a minor case of "heel soreness."

• Phillies pitching prospect (TINSTAAPPP) Aaron Nola made his MLB debut last night. He gave up 1 run in 6 innings of work. That one run? A solo homer by the opposing pitcher, Nathan Karns. Karns now has a 1.250 OPS on the season, 2.21 times higher than Michael Bourn's.

• Speaking of Tiger relievers, Franklin Gutierrez hit a pinch-hit grand slam off of one. (Neftali Feliz)

• Indians reliever Ryan Webb made his 2nd appearance in the past 16 days. That enormous bullpen sure is useful. Kyle Crockett also pitched last night; his third appearance since being recalled on July 8.

• Kyle Schwarber, wanting to put the Matt Laporta label aside, hit a 9th inning HR to tie a Major League game and another in the 13th to win it.

The #mets are 4-for- their-last-74 with runners in scoring position. Let the ineptitude continue!

Seven of the top 59 MLB hitters in hard-hit rate are Indians. You can sit there and count them if you want, but I am willing to bet that 7 gives us sole possession of 1st place in that category. So, so unlucky. 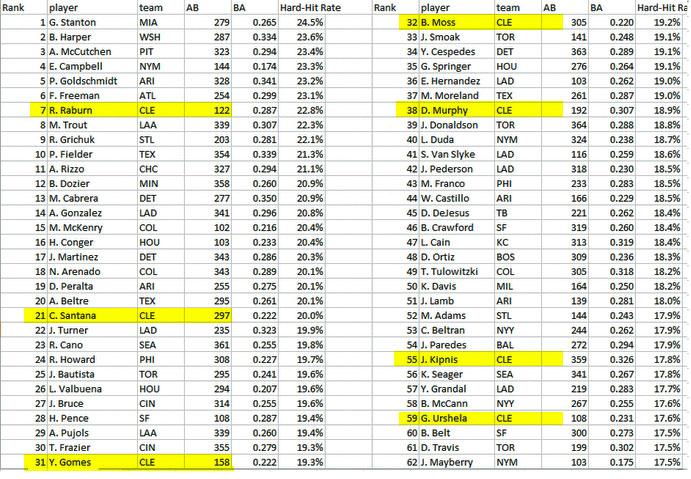