The Indians lose again, taking last gasp of playoff hope with them.

This game was a treat.

Share All sharing options for: The Indians lose again, taking last gasp of playoff hope with them.

I believe Private First Class William Hudson can summarize the state of affairs for the Indians after tonight's shellacking better than I can: 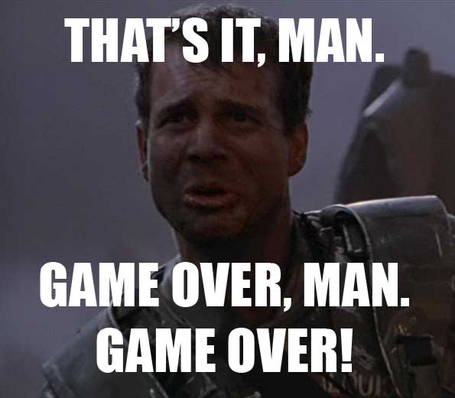 Last night's loss put a serious dent in the Tribe's playoff chances, but they were still in a position where a 5-0 finish gave them a better than 50/50 shot at playing beyond Sunday. Forget the dents though, the engine block fell out tonight, and we're just waiting for Old Joe to crush what's left into a little cube and ship it across the Pacific to be turned into patio furniture.

In terms of particulars, we can start with Danny Salazar, who struck out the side in the 1st and again in the 2nd, but became a bit more hittable in the 4th, and then a lot more hittable with two outs in the 5th, when he gave up back-to-back doubles, followed by an intentional walk followed by another double, which made it a 5-0 game. Salazar soon departed, allowing the first of six relievers to enter the game (bringing them to 562 relief appearances on the season, extending their American League record and moving them into 3rd place in MLB history).

The Offense was as bad as it's been for most of the last two months, managing only five hits all night. Two of those five came off the bat of Michael Brantley, putting him at 196 for the season, just four shy of becoming the first Indian since Kenny Lofton in 1996 to reach 200 hits. One of those hits was his 44th double of the season, which is the most anyone on the team has hit since Grady Sizemore had 53 of them in 2006. Other than Corey Kluber's quest for the Cy Young (more on that in a minute), Brantley chase for 200 hits is probably the most interesting thing going for the team with four games left.

Other than Brantley, it was a sad-sack night for the offense, with the only run scoring on a double play.

Getting back to Kluber... Seattle Felix Hernandez (who's the only legitimate competition Kluber has as the AL's best pitcher this season) gave up 8 runs tonight, sending his ERA up to 2.34. That's still better than Kluber's 2.53, but Felix plays his home games in a better pitcher's park, and he plays all his games in front of a much better defense. Kluber was already ahead in WAR at FanGraphs, and there's a decent chance he'll be ahead at Baseball-Reference tomorrow morning too. With five days left in the season, Kluber is the most deserving option for the AL Cy Young Award. I'd rather have a playoff appearance, but #CyborgYoung would be a nice consolation prize.