Cleveland Indians inch closer in the standings after outlasting the Royals, 3-2, in 11 innings | cleveland.com

From a pitching standpoint, Terry Francona ceded the win if last night's game went into extra innings. All that was left in the bullpen following the eighth inning was Cody Allen and Josh Tomlin. So once the game went into extras, it was going to be Josh Tomlin or bust. Francona has been managing lately as if that individual game was the most important game in the season. And to some extent he's correct, as the Indians are facing an uphill playoff battle in which any loss is devastating. But he's taken his bullpen usage to extremes lately, bringing in pitchers to face one batter and then using another reliever. Entering the eighth inning, things were in pretty good shape, even if you assumed that Bryan Shaw was off-limits. But after Atchison made that poor throw to second base, Francona started wearing a path to the mound, and by the time the inning was over, four relievers had been used, the game was tied, and the Royals seemingly had a huge advantage.

But somehow the Indians won the game, and have set themselves up to end August only 2.5 games out behind both the Tigers and the White Sox if things break right today. And with 10 games still remaining between the Indians and Tigers/Royals, that means the Indians still control their own destiny in the AL Central.

Will baseball ever learn how to pace itself? MLB insider | cleveland.com

MLB does need to address the pace of the game. The rise of the specialized reliever and the added emphasis on working counts has both contributed to lengthening the average game time, and while perhaps you can address those trends directly (make every pitcher face at least two batters?) there are some compensating rules changes (or actually following the current rules) that could speed up the pace of the game. Hoynes notes that the Atlantic League, and independent minor league, as implemented some changes along those lines. I especially like the rule that defensive clubs have just 3 45-second timeouts per game, which would prevent the endless trips to the mound by catchers, infielders, and infielders.

Defense is where I leave the advanced metrics reservation, at least the current generation of metrics. The data is collected subjectively, even if the people making the decisions are as careful as possible. If MLBAM's new tracking system is as good as it looks, we won't be worrying about this generation of metrics for much longer, as starting next season we'll actually be able to measure a player's reaction time, acceleration, and overall speed in game situations.

I have a theory that Progressive Field's small left field (and high fence) artificially limits Michael Brantley's range and therefore skews his UZR (Ultimate Zone Rating). Because the wall makes you play left field conservatively (going for broke on a ball that hits the wall could turn a double into a triple), it's very hard for him to rate well as a defender there. 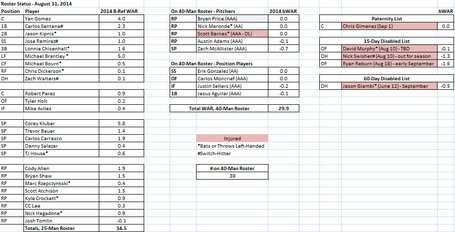 If I had to guess, the Indians will be bringing Jesus Aguilar (the Russell Branyan signing should make that obvious), Austin Adams, Zach McAllister, and Justin Sellers, though with Columbus being in the playoffs I'm not sure if all of them will come up on September 1. The Indians will also be getting Chris Gimenez (Paterntity List), Ryan Raburn (DL), Jason Giambi (DL) and David Murphy (DL) back at some point, which will expand their roster as well. Usually a September callup isn't going to have much of an effect on a club's playoff push, but some extra arms will help in blowout situations, and Aguilar could be a useful pinch-hitter in the right situation.

Miguel Cabrera did leave the game yesterday after tweaking an already sore ankle, so we'll have to see how that affects Detroit's lineup in next week's series in Cleveland.

De Aza is under club control for another season, so he's a potential replacement for Nelson Cruz in left field in 2015, beyond the help he'll provided against right-handed pitching the remainder of this year.

Samuel Deduno is no longer a Twin, as the Astros claimed him on outright waivers.

Recap of the game from a Kansas City point of view*