Danny Salazar, a youth movement in the midst of a playoff race, and an historical field is renovated

Defense could have cost the Indians yet again. The Astros' second run scored because Danny Salazar didn't back up a play at the plate, and because of it, the game could have gone into extra innings. But despite that mental miscue, Danny Salazar continued a trend of outstanding (dare I say great?) starting pitching in recent weeks. The Astros have been one of the better offensive clubs in the AL in the second half, so this wasn't the case of the Indians cleaning up against a hapless offense. And even if you're not convinced that the Indians have a chance this year, the last couple weeks should give you hopes for the future, as we've seen Carlos Carrasco and now Danny Salazar return to the rotation and have success. The two pitchers have the stuff  to dominate a lineup, but this season they haven't been able to match stuff with results. Until now.

As someone who follows the minors, seeing Tyler Holt, Roberto Perez, and Jose Ramirez being the principals in that bottom of the ninth was surreal. Until a couple weeks ago (in Holt's and Perez's case) they only existed in box scores. Now, here they were, batting in the ninth inning in a tie game for a club that is still battling for the playoffs.  Developing star players is generally the facet of a club's minor-league system that people fixate their attention on, but it's also important to develop complementary players. All three players were signed/drafted by the Indians, therefore were developed entirely in the Cleveland system. In a situation like this, when your established starters go down to injury, you absolutely need developed depth to allow you to remain competitive.

League Park debuted as a major-league stadium in 1891, and served as the home park for the Cleveland Spiders of the National League. The park was rebuilt on the same site as a "modern" (concrete and steel) stadium in 1910, a contemporary of Fenway Park (1912) and Wrigley Field (1914). The Cleveland Blues/Naps/Indians began playing at the site in 1901, and later the Cleveland Buckeyes (Negro League) and Cleveland Rams (National Football League) would play there. Needless to say, there was a lot of sports history made at the corner of Lexington and E 66th.

This isn't a complete restoration of League Park II (as you can see from the pictures at the link), but that would have been ridiculously expensive and rather pointless. The dimensions of League Park II have been maintained, so that home plate is in the same spot as it was in the 1920 World Series. The 48-foot-high fence, which stretched all the way to center field, now stops in right-center field. The playing surface is field turf, which makes sense, as maintaining a grass surface is very expensive. Most importantly, the park will serve a purpose, as youth baseball and softball leagues will play there, as well as a vintage-style league. Some high school games will also be scheduled there. The park doesn't have the seating capacity to host even minor-league games, but again, there was no need to do that given the other facilities in Northeast Ohio.

Both players would be activated in early September, which just so happens to be after the rosters can be expanded. 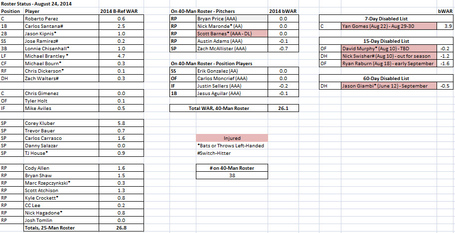 The addition of Chris Gimenez (for future considerations, which could be just cash) means that the Indians now have 38 players on their 40-man roster. So they still have room to add a last-minute trade acquisition or add a minor-leaguer to their 40-man roster (Giovanny Urshela?).

The Royals won yet again, stretching their lead to 3 games over the Tigers, who....

....split a doubleheader with the Twins. The Tigers, long used to dominant starting pitching, haven't been getting of late, though yesterday Justin Verlander returned after missing a start.

What are the expectations for Kennys Vargas? - Twinkie Town

Will Carlos Sanchez be better than Gordon Beckham? - South Side Sox

The Gordon Beckham Era is over, and I'm pretty sure White Sox fans are happy about that.