A weekend spent with the Columbus Clippers in Scranton, PA

The Clippers came to town, my town, for a four-game set with the Scranton/Wilkes-Barre RailRiders. What follow are my impressions of the young men currently occupying the roster of our Triple-A team...

Share All sharing options for: A weekend spent with the Columbus Clippers in Scranton, PA

Some context, for those of you not up on Triple-A standings: The Clippers came into this series leading their division. They're currently ranked 5th in the International League. The RailRiders came in hovering around .500 and have been in a bit of tailspin going 2-6 in their last 8 games.

The Clippers did their part and took 3 of 4 from the RailRiders who, on Friday, were actually the TrolleyFrogs. (This was a promotion in which the team played as one of the losing nicknames from the vote to rename the team in 2013. The logo is pretty cool, though.)

I also want to take a moment to reflect on that name change which came with a field facelift. I liked changing the name from Yankees, for obvious reasons, and am good with the RailRiders name, given the area's connection to the rail industry. What I don't understand, however, is the porcupine mascot. But the "new" field looks great: 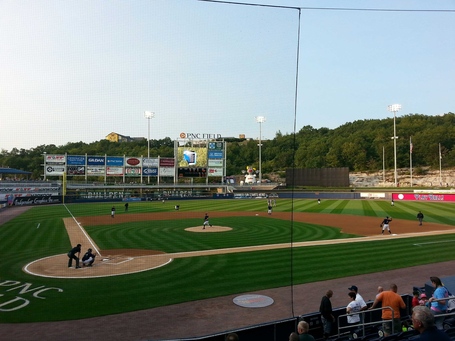 Now, what you all came for - the players!

Francisco had himself a difficult series at the plate, going 3 for 19 with a double, no walks, no runs scored and four strikeouts. Since leaving, however, he's gone 4 for 9 with a HR. Maybe he didn't like the "fresh" Scranton air.

Lindor clearly was struggling in the series and, even after the last two nights, is only putting up a slash of .233/.269/.360 in his first exposure to AAA baseball. Near the end of the series, you could see the frustration in his at-bats and he was swinging early instead of remaining patient. While this may seem like a bad sign, I didn't mind it. Not everything will be roses for a young player and it will help him to overcome some adversity and learn from the situation.

When he did make contact, he was using the middle of the field and not trying to pull the ball and beat it into the ground.

His defense was as advertised. He didn't have any chances to make major highlight-reel plays in the field, but he was steady, consistent and showed great range and a strong arm.

I'm not sure what the scouting reports said on Mr. Ramsey's defense, but the kid looks like he can go get 'em. He was splitting time in CF before coming over but has played 9 of his 10 games there with the Clippers, including all 4 in this series. He seemed to take very direct routes to the ball ran down a few that the stadium didn't think he'd get to. His arm was never really tested to get an idea of it's strength.

Ramsey went 5 for 13 with a 2B and HR, the HR coming off a decent LOOGY. He also showed some great hustle on the basepaths. The SB numbers don't spell out a burner, but his speed in CF and on the paths show that he has a little bit of speed to work with

His stance and swing seemed different to me. He's very forward facing while he waits, then loads quickly and swings quite violently. You can see a video of him from this year here, before he was traded. It was obviously getting results in AA, so we'll see how it translates.

We're all going to get a taste of Zach Walters while he remains with the big club. And you've already seen about as much from his as I did that weekend. He had a great second game with 2 doubles and hit a few balls hard in the first game as well.

There have been questions on his defense and where he will play. In the first game he played 2B and made an error on an easy, soft liner that was hit right at him. Other than that, he didn't see much action. His play in LF the next was adequate, though there wasn't much to really test him. He seemed to move easily on fly balls, though.

I think he's going to hit with the big league club eventually, but he probably shouldn't be viewed as anything but a backup in the infield. Maybe he can develop into a sort of Ben Zobrist, but he'll need to improve more at in the infield. His home should probably be in the corner OF positions.

Urshela isn't doing anything to hurt his stock. He kept right on hitting in this series, including a HR off of a lefty and a 2B going the other way. If he can keep using the whole field, he'll get his hits.

His defense wasn't really tested that frequently, though he did make a great charging play on a sacrifice attempt with a strong running throw. He was also charged with an error that he sort of olé-ed, but it was a well struck ball right at him. I didn't see anything that would make me think elite defense, but definitely above-average.

Carlos wrapped up the series looking a little lost at the plate, but before he got to that point he hit the ball well, including a 3B and HR, both off different lefties. I haven't figured out what his history says about how he'll hit lefties, as he's spent half the time with no discernible split and the other half being terrible against lefties. The 3B and HR were good signs, none the less.

I didn't get a chance to see the canon he sports for an arm, which was a bummer.

For his part, Arias threw 7 scoreless innings of 3 hit ball with 3 strikeouts. It was hard to get a good handle on his stuff from my viewpoint, but his fastball sat about 88-89, topping out at 90. Got some swings and misses with the breaking ball but also had some balls hit hard right at people or made into outs by the defense.

Maybe he's the next Josh Tomlin? Another scoreless 7 IP with 2 hits and a walk. Seems to throw more junk than Arias and also sat 88-89, topping out at 90. Unlike Arias, there were fewer balls hit hard.+

Davies faced off against Michael Pineda, who was rehabbing. The offense struck out 7 times in 4 1/3 innings but also collected a run on 6 hits in that time.

Price was sitting at 93 with his fastball, but it seemed to sound very heavy in the catcher's mitt. Not sure what the book is on him but he pitched well with a strikeout and a hit. Again, that fastball sounded louder than the rest of the lot.

... is not ready for big league action. Yet. His command isn't quite there. His fastball, which fell from 88 to 86 from 2011-2013, was sitting at 87-88. In his first appearance he managed 2 Ks and a walk, but needed a few too many pitches to get the Ks and walked the first batter on 4 straight pitches.

His second outing looked worse than it was. The command issues were still there, as he had a walk and a HBP, but he was also done in by an error on Audy Ciriaco and a BABIP single. He went an inning the first time out and the then 2 the second time.