Next in our mid-season PTM ratings we arrive at relief pitching, which in recent years has been a strength of the organization.

I use the same formula for both starting and relief pitchers, with the exception of a .60 penalty for relievers, given the disparity in innings between a starter and a reliever. That makes the bar rather high for a relief prospect to crack the PTM threshold, but so far this year two pitchers have done just that. 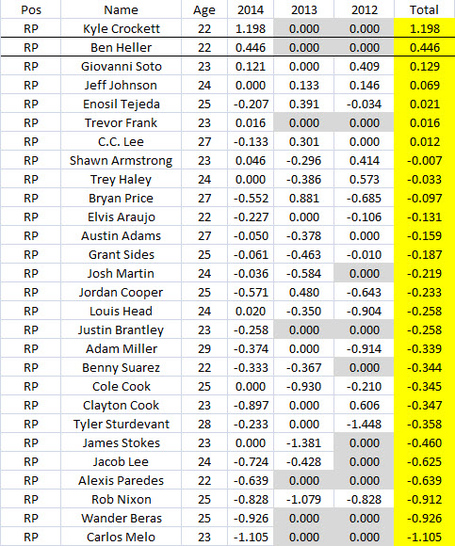 Even with the sizable reliever penalty, Crockett has the highest score in the organization. He checks all the boxes: he was very young for both minor-league levels he's appeared in, had an outstanding strikeout rate, didn't walk anybody, and didn't allow a home run in Akron or Columbus. It's likely that this will represent the first and last time that Crockett is eligible for this list, as it's almost a certainty that he remains in Cleveland the rest of the year, which would exhaust his rookie status.

The Indians selected Crockett in the 2013 draft, and moved as quickly as possible through the organization. The Indians purchased his contract in May; he made his MLB debut before he made his AAA debut. His could become a true setup man if he can perfect his changeup, but even if he doesn't, he still can be a dominating weapon against left-handed hitters late in games.

Selected in the 22nd Round of the 2013 Draft out of tiny Olivet Nazarene College* in Illinois, Heller has started a grand total of one game in his 55 professional appearances. He had a decent showing last season with Mahoning Valley, but was overpowering this season in Lake County, allowing 4.6 hits per 9 innings and striking out 15.6 per 9 innings. Promoted to Carolina in early July, he's continued his dominant run of appearances.

Heller has a mid-90s fastball, and a good slider, two pitches that most top-end major-league relievers feature. There isn't a lot of difference stats-wise between Heller's and Cody Allen's Age 22 seasons, and that's saying something.

Traded after Spring Training to Baltimore for minor-league utility man Torsten Boss, Guilmet has been driving back and forth from Norfolk to Baltimore all season. He hasn't pitched as well in 2014 as he did in 2013, although his rates are still very good.

Price started his career as a starter, but since arriving in the Indians organization has been used out of the bullpen. He was part of the package that Boston sent the Indians for Victor Martinez way back in 2009, but Price is still trying to crack the majors. 2013 was his best pro season, striking out 11 and allowing just 6.8 hits per 9 innings between Akron and Columbus. He's back in Columbus again, and as he was added to the 40-man roster last winter, is just a phone call away from the majors.

He's gotten some opportunities in Cleveland, but hasn't yet had a regular role in the Tribe pen. Lee, who sports a sinker/slider combination is now two years removed from Tommy John surgery. His numbers haven't been quite as dominating as they were a year ago, but I think Lee is still very high on the relief depth chart.