Next in our mid-season PTM ratings we come to starting pitching, which going into the season was the weak part of the system. Have things improved?

For the details about how the pitching scores were calculated, please see the pre-season ratings. 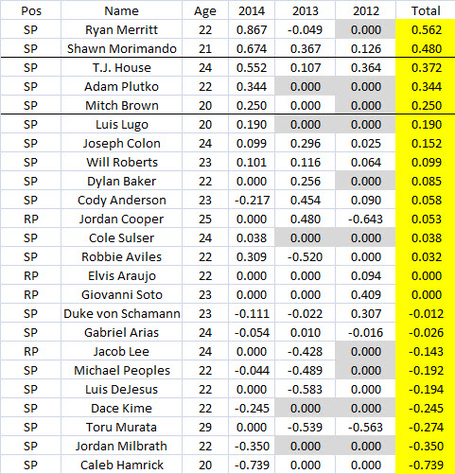 Earlier this season, Ross Atkins compared him to Josh Tomlin, which makes a lot of sense from both a build and stuff standpoint. Unquestionably Merritt has had the best statistical season in the organization (2.13 ERA, 6.5 H/9, 1.4 BB/9, 7.0 SO/9). Drafted by the Indians in 2011 out of junior college, this is Merritt's third season as a starter in the organization, and he's improved his stats from year to year even as he's been promoted to Lake County and now Carolina. His stuff is not overpowering, but he is succeeding with outstanding command (he has a career 1.6 BB/9). Listed at 6'0", 165 lbs, you wouldn't think Merritt would be a starter by looking at him, but thanks to that outstanding command, along with three solid pitches, he's made himself into a solid starter prospect.

Another pitcher who was not a high draft pick, but certainly has impressed with his performance. Last year Morimando's main problem with walks (even though his ERA - 3.73 - was fine) but in his second season in Carolina he's improved dramatically on that front (5.1 BB/9 to 3.3 BB/9), and as a result is now pitching in Akron. Morimando has four pitches (fastball, curve, slider, change), and is now throwing in the low-90s, certainly good enough to get by at upper levels.

House was also a low draft pick (16th Round, 2008), but that's a bit misleading, as he fell because he had a strong committment to Tulane. The Indians convinced him to sign with a $750,000 bonus. House has been a durable, solid pitcher throughout his minor-league career, and based on his initial major-league experience, you can see why. House is aggressive in the strike zone, and doesn't get rattled if he gets into trouble (last night's performance in Minnesota was a perfect example of that). His upside probably is a mid-rotation innings eater, but with starting pitching so hard to come by in baseball, that's valuable.

Another pitcher who doesn't have overpowering stuff but has been getting hitters out. Plutko was a teammate of Trevor Bauer's at UCLA, but unlike Bauer, Plutko doesn't have an above-average pitch, instead relying on his total package of four decent pitches to succeed.

Brown has battled injuries and command problems in his first couple pro seasons, and really struggled to begin the season (opposing batters hit .309/.404/.420 in April) but he's recovered since then (.233/.328/.332 over the last 90 days). If he can spot his mid-90s fastball in the zone, that sets up his arsenal of above-average offspeed pitches. Now that Trevor Bauer is in the big leagues, Brown may have the best stuff of any starter in the system.

Bauer, after a very hit-or-miss 2013 campaign, has started to deliver on his enormous potential. On the outside of the rotation when the season began, Bauer is now going to be key to any 2014 playoff hopes.

One of the biggest disappointments of the season, Anderson has struggled to adjust to AA. Most disturbingly, his strikeout rates have dropped from 8.2 a year ago to just 5.8 with the Ducks.

Dropped off the list not by pitching poorly, but because he's missed practically the entire season so far with a broken leg. He's just been activated, so we could see him re-join the list in a couple months.

Was by far the best starter on the Arizona club a year ago, and has continued that success against polished college bats.

His stuff is among the best in the system, but yet to show sustained success. Still only 19, though.

Signed out of Taiwan two years ago, but until last month had pitched a grand total of two professional innings thanks to Tommy John surgery.

Struggled last year in his pro debut, but this time around Shane has been impressive, striking out almost a batter an inning.

The Indians persuaded Sheffield to forego a college career at Vanderbilt, and they're getting a high school pitcher who already is already comfortable throwing four pitches and has a good feel for the strike zone, two things the typical prep draftee doesn't have.