Yesterday the AAA and AA All-Star Games were held, so although we've long passed the numerical mid-season point for the 2014 minor league season, we are at a nice symbolic point to stop and look at what's happened in the minor-league system. So to that end, I'll be sharing over the next week updated PTM scores and general commentary on the prospects throughout the system.

First, a word on PTM, or Prospects That Matter. PTM is a prospect progress score that takes into account the prospect's age vs the average level age, his position (or for pitchers, role), and his production over a three-year period. To qualify for inclusion for a single season, a position player must have had at least 175 Plate Appearances at a single stop, a starting pitcher must have thrown at least 50 innings at a single stop, and a reliever must have thrown at least 25 innings at a single stop. The production calculation takes into account just offensive and pitching statistics; base running and defense are not included, though I'd like to fit them in somehow in the future. So this rating system will overrate a poor defender, and underrate an excellent defender. Only experience in full-season leagues are counted, so stats from Mahoning Valley, the Arizona League, and the Dominican Summer League will not be included in a prospects final numbers. 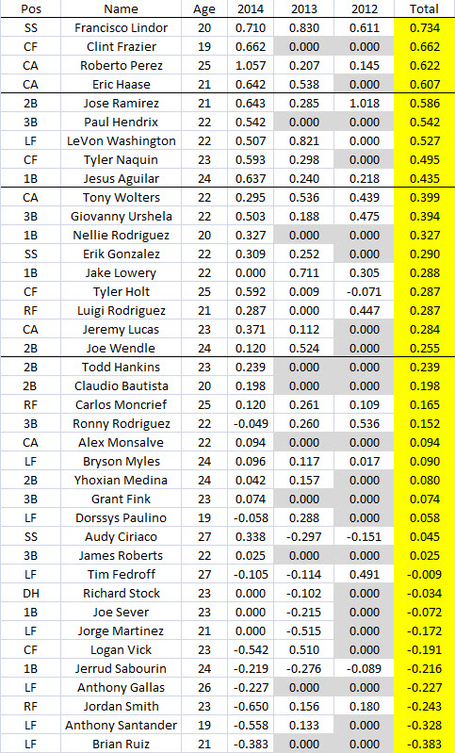 Had defense been included in these rankings, Lindor would have lapped the field. That Lindor's still #1 without even considering his incredible defensive skills tells you how special a player he is. The Indians drafted him knowing that he'd be a good defender, but in the three years since then, he's developed his offensive game to the point where scouts are projecting him as a top-of-the-order hitter. The Indians may move him up to Columbus soon (after the AA All-Star Break), setting the stage for him to take over as starting shortstop as soon as next Opening Day. Over the next couple weeks, anyone who talks trade with the Indians will be obliged to ask about Lindor, but the answer will be a definitive no.

After a so-so start, Frazier is starting to hit for power in Lake County. The Indians challenged him, skipping him over Mahoning Valley just a year after he graduated from high school. Thus far he's held his own in center field, though he'll probably move over into a corner by the time he reaches the majors, and if his power continues to develop, that won't be a problem.

Like with Lindor, the best part of Perez's game is his defense. Even as Perez struggled at the plate last year (suffering through a bout of Bell's Palsey), he still remained an interesting prospect because of his acumen behind the plate. He was named the Best Defensive Catcher in the organization by Baseball America for three straight years (2011-2013), and when you look at his CS%, you understand why. In 6 seasons in professional baseball, he's averaged a 38% Caught Stealing rate, which one of the reasons the Indians chose to make him their backup catcher. Perez is having the best offensive season of his pro carerer, but even if he doesn't hit I think he'll have a considerable big-league career.

Haase signed with the Indians out of Michigan rather than attend Ohio State, and so far it looks like he made the right choice. In 684 Plate Appearances in Lake County, he's hit 28 home runs, which is quite a lot in a pitcher's league. Combine that power with athleticism you don't usually see in a catcher and you have an intriguing prospect.  Strikeouts (186 with Lake County) are a point of concern, and although they aren't really hampering him now, it could affect his game at higher levels.

Undersized but certainly not underskilled, Ramirez brings a nice combination of speed and plate discipline to the table. Second is probably his best position, but he can play shortstop, which creates the possibility of a future as utility player if he doesn't earn everyday playing time. For now, the Indians will probably utilize him as a late-inning pinch-runner.

After Dorssys Paulino moved to the outfield, Hendrix, an 18th Round pick out of TCU in 2013, took over as the starting shortstop. He's quickly become one of the club's best hitters, and his hot first half has earned him a spot in these rankings.

Washington has played in 46 games this season, which is a big step by itself. Washington has spent most of his professional career injured. The Indians selected him in the 2010 draft, and had he remained healthy might have already made his major-league debut. As it is, he has yet to see AA, but when he's played, he's hit.

Before the hand injury, Naquin was having the best season of his young career, hitting .313/.371/.424 for the Ducks while playing a nice center field. When he was drafted, the questions about Naquin were whether he'd hit enough to play a corner, or  ave enough range to stay in center. To this point, Naquin has shown enough range to stay in center, making the first question moot.

Prior to this season Jose Aguilar had steadily made his way up the organizational ladder, but really hadn't had an offensive breakout that would make him a viable major-league first baseman. That breakout happened this season, first in the Venezuelan Winter League, and continued in Columbus. He had an incredible April, and although he's cooled somewhat since then, he's already cracked the big leagues, and given that he's right-handed (the Indians are very left-handed heavy), could soon work himself into a permanent role with the Indians.

Already was a promising second prospect, but has made a smooth transition to catcher. If you haven't figured out by now, the Indians are loaded with catching prospects, so perhaps Wolters is traded as part of a July deadline deal, or perhaps he moves back to the middle infield.

Urshela has always been very young for his levels, and has shown very good defensive skills. But his offense has lagged behind until this year, when he hit .300/.347/.567 with Akron before holding his own in Columbus. He's never been a patient hitter, usually putting the ball in play early in the count, as evidenced by low walk and strikeout rates.

Has been compared to Jesus Aguilar, and for good reason. Rodriguez is a right-handed first baseman with very good power, and wasn't a high-profile draft pick (15th Round, 2012). He hails from George Washington HS in New York, the same high school that produced Manny Ramirez. After a poor showing at Lake County in 2013, he's stuck this year, hitting 16 home runs in 368 Plate Appearances. Might get a promotion to Carolina with Mike Papi now in Eastlake.

Was a surprise addition to the 40-man roster last winter, but this season he's shown that the Indians made a wise choice. Didn't really start to hit until this season, but had impressed the club with his athleticism. He has already briefly made an appearance in Akron, and should play for the Ducks in 2015.

Hasn't accumulated enough PA for his 2014 stats qualify because of time spent on the DL (orbital fracture). With both Tony Wolters and Alex Lavisky on the Akron roster, Lowery has been playing more first base than catcher, and probably that trend will continue given the catching depth in the system.

Seemed lost in the shuffle when he returned to Akron this season, and pushed out of center field by Tyler Naquin. But injuries in Columbus gave him a chance to play center for the Clippers, he got hot at the plate, and made an extremely brief major-league appearance.

If he makes the majors, Rodriguez would be the first Luigi in MLB history.

An offense-first catcher, Lucas has gotten quite a bit of playing time in Carolina.

Started slow in Akron, got hot in June, then unfortunately broke a bone in his hand.

Really struggled at the plate this season. Had absurdly high strikeout and walk rates in Lake County the year before, and hasn't adjusted to more advanced pitching.

Akron has been a roadblock for Ronny, and because he had to repeat the level, was moved to third base to make room for Francisco Lindor and Joe Wendle. He's playing second now that Wendle is on the DL, but the big issue is that he's struggled at the plate.

After committing a an astounding 13 errors in his first 24 games this season, Paulino was moved to the outfield. The position change was probably going to happen eventually, but I don't the Indians planned on having to do it so soon in his development. He's still very young for the level (he's the same age as Clint Frazier), but now that he's an outfielder more will be expected of him offensively.

An incredible arm combined with an advanced approach at the plate makes Mejia already one of the organization's best prospects.

Zimmer doesn't have any eye-popping tools, but does everything well. Should move pretty quickly through the system, and probably will end up at a corner by the time he's ready for the majors.

Was an outfielder in college, but probably a first baseman in the pros. Papi has already made his full-season debut, and like Zimmer, should move quickly.

Another 18-year-old having a great pro debut.

This is based on scouting reports and the fact that the Indians gave him a significant bonus last year.

I normally wouldn't place a player on the DSL club here, but Mejia has had an incredible season. He's currently hitting .357/.441/.429 with an unbelievable 45 steals in 40 games. He has more than double the steals of the second-place player in the league (45 to 21). In a week or so, assuming he keeps up this pace, he'll have more steals than anyone has had in the DSL since at least 2006, the first year that stats are available.