Indians gifts to Derek Jeter include guitar and LEGO artwork

If you're going to give a rival player presents, you might as well give him something cool, which the Indians did.

Share All sharing options for: Indians gifts to Derek Jeter include guitar and LEGO artwork

Thursday's 9-3 win over the Yankees marked the final time Derek Jeter will play in Cleveland (unless the two teams meet in the playoffs, which seems a pretty unlikely happening for two .500 teams). As has become something of a custom for Hall of Fame sort of players who choose to announce their retirement a year ahead of time, Jeter is getting gifts from each team as he visits them for the last time, usually including a check for his charity, with $10,000 seeming to be the standard amount.

Here are the non-financial presents that have been given to Jeter this season, along with my highly subjective grade for each team's work. In my book a good present is not only something cool, it's something fitting, ideally both for the team giving the gift, and for the player receiving it. The gold standard, so far as I'm concerned, is the rocking chair Minnesota gave to Mariano Rivera last year. A rocking chair is a fitting gift for a man retiring, but what pushes it over the top is the fact that it was made of broken bats, something Rivera created quite a few of during his career: 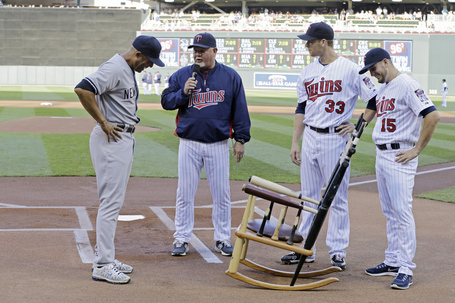 Alright, on to the gifts given to Jeter:

Astros: A pair of pinstriped cowboy boots, a Stetson hat, and a set of golf clubs 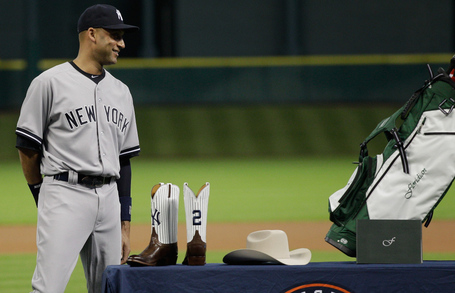 The boots are ugly as hell, which I like, and along with the hat, they make sense for Houston.The golf clubs seem pretty meh to me though. Grade: B- 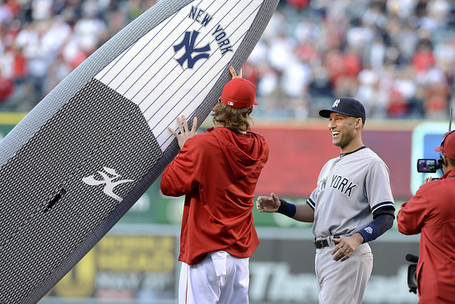 A paddleboard is like a surfboard with training wheels, something for someone not up to the challenge of actually surfing. If I thought the team was mocking Jeter's toughness, I'd give them an A, but I think the Angels really do think a paddleboard is the coolest, which is such an Anaheim thing to think. Grade: C+

The Brewers haven't hosted Jeter very many times (though they were still an American League team when his career began), so I guess they shouldn't be expected to come up with anything as thoughtful as other teams, but a bronze bat? Pretty lame, Milhouse. Grade: D 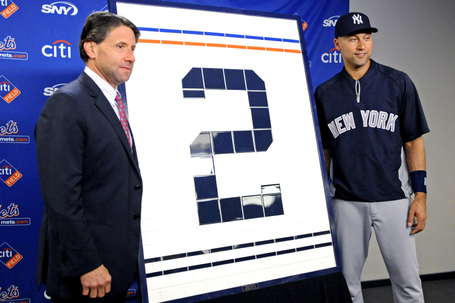 I think this one is really cool. Interleague play between the two teams has always been known as "The Subway Series," and unlike most of the gifts on this list, this is one I can actually imagine Jeter displaying somewhere. Grade: A-

Cubs: A number 2 scoreboard square from the ancient scoreboard at Wrigley Field

Jeter played only five games at Wrigley Field, so this is another case where a gift was hardly justified. I like that the Cubs chose to go understated, while still finding a way to do something quite fitting for both the team and the player. Grade: B+

White Sox: Bench made of baseball bats and balls 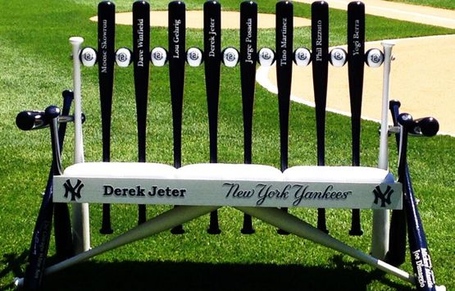 Unlike Rivera's rocking chair, this one doesn't have any personal connection to the player, and there's also nothing particularly White Sox or Chicago about it. Plus, while I like the ugliness of the cowboy boots, the ugliness of that bench is a different story. Grade: D

Cardinals: Cufflinks with a likeness of Stan Musial on them

Another city Jeter hardly spent any time in. I can't imagine Jeter will actually wear the cufflinks, but they are kinda cool, and they at least say St. Louis. Grade: C-

Mariners: A seat from the Kingdome and a base from Safeco Field (plus a fancy watch that former teammate Robinson Cano gave him)

The Kingdome is where Jeter collected the first hit of his career, so the seat from there is a nice touch. The base from Safeco, on the other hand, is pretty dull. Grade: C+

Athletics: A commemorative bottle of wine

My guess is Billy Beane forgot they were supposed to get Jeter something, so he just grabbed something from his kitchen on the way out the door that morning and found a #2 sticker to slap on it. Grade: D

Twins: Second base from the final baseball game at the Metrodome

Jeter's going to have enough bases to fill a couple fields by the end of this tour. It's a little hard to believe that the team that came up with that rocking chair couldn't think up something a bit cooler than this, but that last game in the Metrodome was a playoff loss to the Yankees during the 2009 playoffs, a game in which Jeter doubled, so at least there is some sort of connection between him and that base. Grade: C-

Indians: Gibson Les Paul guitar with pinstripes and Jeter's #2, and a LEGO mosaic of Jeter 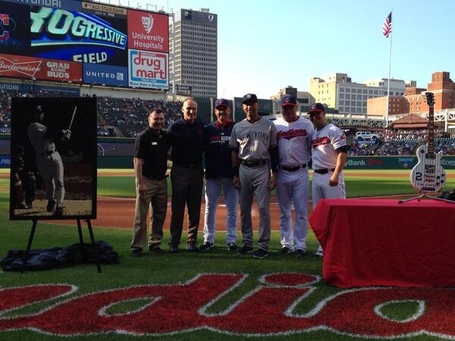 The guitar is fitting due to Cleveland being home to the Rock and Roll Hall of Fame. The guitar is not fitting, because Jeter probably only listens to smooth jazz and synthpop. The guitar is cool, but it's the mosaic that takes this to another level. Designed and created by Indians visting clubhouse manager Wayne Peltz, it is totally awesome, and I would love to have one of Jim Thome or Kenny Lofton in my apartment. Grade: A-

Jeter will finish his career with a batting line of .354/.422/.472 in 330 plate appearances at Jacobs/Progressive Field, where he had 102 hits (more than any non-division opponent in stadium history), stole 11 bases, and scored 50 runs. That .354 batting average is the highest by any opponent with 150+ PA in the stadium. Given his success in Cleveland, I say good riddance!