This very cool poster would look great on your wall.

Ballpark Blueprints was created more than ten years ago, when a pair of friends named Tom Young and Marvin Larson went looking for posters that showed the blueprints of various MLB parks, but couldn't find them anywhere. While most people would felt disappointment that such a cool thing didn't exist, those two decided to create such posters themselves.

Their original run included Fenway, Wrigley, Busch, and Yankee Stadium, and because it was a passion project for them, not a career, eventually real life kept them too busy to keep up with the project, but over the winter they got it going again, and have added a number of new prints.

Last week they released a beautiful looking poster for Jacobs Field (they surveyed Tribe fans about whether to use Jacobs or Progressive, and apparently the original name won in a landslide). 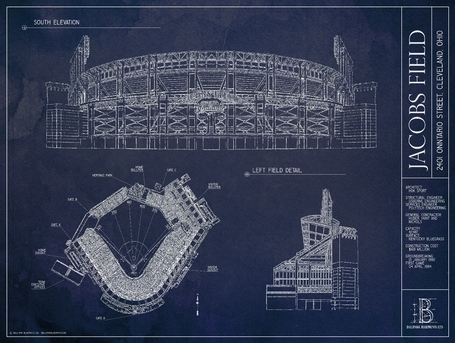 Tom and Marvin were good enough to send me one of the posters, but there weren't any string attached, and I wouldn't be writing this post and publishing it on the front page if I didn't think the poster was really cool. It is 18" x 24", big enough to have some gravity, without being so large that it will utterly dominate whatever room you put it in (it appears there is also a 12" x 16" available as well). It's also much more understated than most sports posters, which I like (I don't think my fiancee would go for the posters I had on my walls ten years ago).

Mine is going to look great in the study I keep at home, where I write many a post for Let's Go Tribe. It would look great in your study too. Also, this time of year many people are often scrambling to find a nice Father's Day gift for dear old dad. I submit that one of these posters would be a far finer present than another dozen Top Flites (it would make a wonderful belated Mother's Day present too, if you're still in need of something on that front. Or maybe you've got someone about to graduate and head off to college. Wouldn't you rather they put this on their dorm room wall, instead of some woman in a bikini lounging on a Pontiac Firebird?

The Jacobs Field print is available for order here.

Tell them Jason sent you. They probably won't care, but it's always good to have something to tell someone.