Just an awful weekend for baseball. I'd love to offer some pearls of optimism here, but I can't think of anything good to say about that Tigers series except I'm fortunate to have not watched all three games. Anyway, here are some links about baseball:

There's a lot to be said about yesterday's game, and almost all of it's negative. Here's a collection of recaps full of terrible things:

But perhaps the game - and the weekend overall - can best be summed up by the following image: 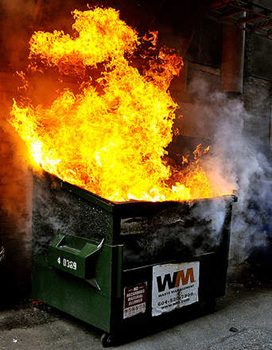 Indians quietly moving Allen, Santana | Ohio.com - Cody Allen has snuck his way into the closer role and in a similar fashion, Carlos Santana is finding a permanent home at first base. Neither move has been officially announced, but both are part of  logical progression based on what's happened this season and on Terry Francona trying to put t"the best team out there."

Who's on third? It's Lonnie! | Cleveland.com - Hoynsie expands a bit on the story, from the perspective of full-time third baseman Lonnie Chisenhall. He examines the implications for Chisenhall, Santana, and Nick Swisher, who is now a man without a permanent position.

Murphy looking to bust out of skid at plate | Indians.com - David Murphy was in a nasty 0-25 funk prior to singling in Saturday's futile comeback attempt. Murphy thinks he's back on track, which is good, since he's been one of the Tribe's best hitters this year.

The WAR Room: Aguilar and Ramirez stay hot | Indians Baseball Insider- IBI looks at Columbus Clippers hitters in 2014 so far, and prospects Jesus Aguilar and Jose Ramirez are putting up a good showing.

LGFT Charles Nagy always felt at home in Cleveland | Cleveland.com - Terry Pluto had a chance to sit down with the ace of the Tribe's 90's staff while he was in town for Omar Vizquel's Indians Hall of Fame induction. It's a nice piece, as Nagy waxes nostalgic about that 90's team and the 13 years he spent in Cleveland.

Brantley continues strong showing on All-Star ballot | Indians.com - Michael Brantley has jumped up the ballot to number six among AL outfielders. Dr. Smooth may not be the only Tribe All-Star this year, but he's the only one that's been consistently useful.

Tidbits from around MLB