Share All sharing options for: Cleveland Indians Sunday News and Notes: May 4, 2014

Not much offense last night, as has been the case often, but this time good pitching and some key defensive plays allowed the Indians to win despite only scoring two runs. As Terry Francona has said a lot lately, if you aren't hitting, you have to play almost perfect baseball to win, and last night the Indians did that.

The Indians can probably get by a day or two without Michael Bourn and Jason Giambi, but they'd have to make a callup if the injuries linger longer than that. Nyjer Morgan would be the logical callup if Bourn's injury lingers, and if Giambi has to do on the DL, then I think Jesus Aguilar makes sense. But given the reaction after last night's game, I think both can avoid the DL with some rest.

I think this represents the end of Carlos Carrasco's opportunities in the rotation. The Indians have tried for going on five years to make Carrasco a starter, and for good reason: Carrasco has the stuff to get MLB batters out 3 times through the order. But for whatever reason, Carlos hasn't been able to have success, and now I think he's going to be a reliever, and a pretty good one. A reliever, no matter how dominant he is, is not going to be as valuable to a club as even an average starter, but Carrasco has been well-below average in the rotation.

Replacing Carrasco is Josh Tomlin, who after some initial post-Tommy John struggles, has been pitching extremely well in Columbus. In his last start he threw a AAA Maddux, a complete game shutout on 89 pitches with 11 strikeouts. Tomlin will make his 2014 debut on Tuesday, and if things go to plan, he'll remain in the rotation from here on out.

Carrasco's move to the bullpen means that the Indians are down to 7 starting pitchers on the 40-man roster:

After that the depth is really thin. The other two regulars in the Columbus rotation are Travis Banwart and Tyler Cloyd, neither of whom you'd want in a major-league rotation for a month.

The DiaTribe: Lazy Sunday Down in the Minors 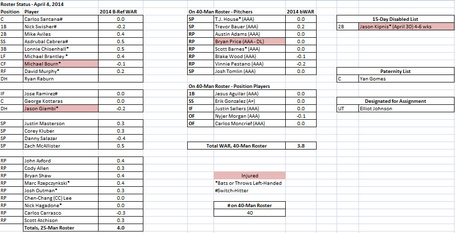 Last week the Indians had nobody on their major-league Disabled List. Now there's one on the DL (Kipnis) with two other players hurting (Bourn and Giambi). Such is the nature of an MLB season.

Jason Bourn wasn't the only center fielder to suffer a hamstring injury this series. Adam Eaton, who has been playing very well this season, was placed on the DL by the White Sox yesterday. Alejandro De Aza is probably the starting center fielder in Eaton's absence, with Jordan Danks getting some playing time.

What impact will Joel Hanrahan have on the Tiger bullpen? - Bless You Boys

Many clubs were interested in Hanrahan, but the Tigers outbid everyone else, giving the former National/Pirate/Red Sock a $1M contract with incentives that could bump his salary to $3M.

When the Twins arrive in Cleveland tomorrow, Aaron Hicks won't be in the lineup. Neither will Josh Willingham or Oswaldo Arcia, both of whom were already on the DL.

Duffy made his first start of the 2014 season last night, as Bruce Chen was placed on the DL a couple days ago. He did fairly well, allowing one run in four innings (I'm assuming that his pitch count was limited).

In case you missed it last night: Jose Abreu couldn't get the ball out of his glove, so he just tossed his glove to the pitcher covering first base.