Prospects of Interest: Orange
These are players who didn't meet PTM for one reason or another but in my (subjective) mind worthy of interest to the casual fan. For instance, players who didn't meet Plate Appearance or Innings thresholds weren't included in the PTM ratings, and PTM didn't count short-season results. So players like Kyle Crockett (not enough innings),Clint Frazier (short-season) and Francisco Mejia (short-season), while they aren't PTMs, are very much worth following.

This week I've added Adam Plutko to the Prospects of Interest category. Yesterday Plutko (11th Round, 2013) was promoted to Carolina after an impressive start to the season in Lake County, showing the kind of production you'd expect to see from a first round selection.

Another week, another roster shakeup thanks to injuries at the major-league level. George Kottaras and Jesus Aguilar are back in Cleveland, and David Cooper and Matt Carson were placed on the DL, so the lineup looks completely different this week. Justin Sellers and Roberto Perez are back, and Tyler Holt was promoted from Akron. Earlier in the week, Gabriel Arias was promoted to Columbus, and Blake Wood was Designated for Assignment in order to make room for George Kottaras on the 40-man roster. 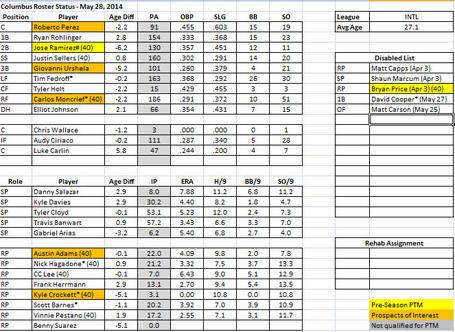 Akron saw some fallout from all the Columbus moves. Tyler Holt left for Columbus, and Ollie Linton was promoted from Carolina to replace him. Gabriel Arias went to Columbus, and replacing him in the rotation is Shawn Morimando, who will be making his AA debut after a year-plus in Carolina. 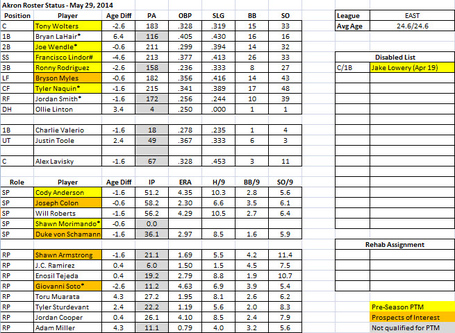 With Morimando heading to Akron, Adam Plutko was promoted to replace him. At the beginning of the season, I would have guessed that 3-4 pitchers other than Plutko would be promoted first, but I suppose that's why they play the games.

On the offensive side, Erik Gonzalez is back from the Disabled List. 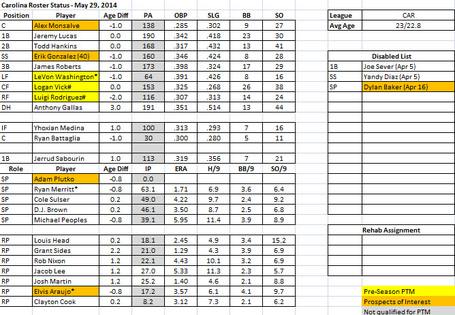 As of Thursday night the Indians haven't made a move to replace Adam Plutko on the roster, and I'm not sure whether they'll promote a starter or a reliever from Extended Spring. 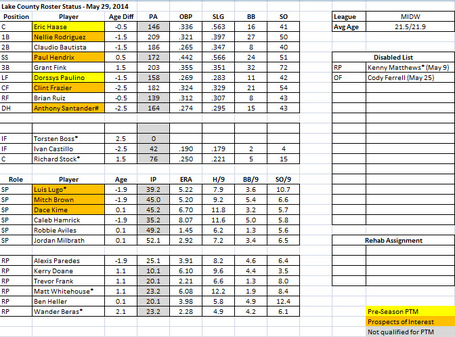