We complete our review of recent Indians drafts with a look at the 2012 and 2013 drafts.

Given that most of the players from these drafts still haven't reached the AA level, it's still way too early to make any pronouncements on the draft classes. But I do some comments on how these players are progressing through the system. 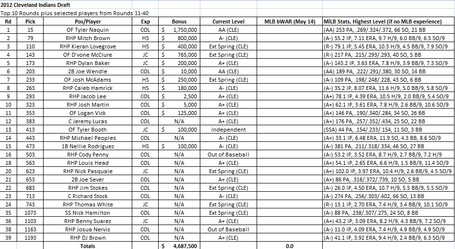 This was the first draft conducted under the new draft pool system, in which each club is assigned a pool of money to sign their picks from the first 10 rounds. The Indians chose to go after several high school picks (which normally take more money to sign) early, and making up for it by selecting some college seniors (who normally receive very low signing bonuses) towards the bottom of the top 10 rounds. Their high school selections (Mitch Brown, Kieran Lovegrove, Caleb Hamrick, JOsh McAdams) haven't had any success yet at the full-season level, but Joe Wendle, one of the college seniors, is already at AA, and another, Josh Martin, is dominating this season in the Carolina League.

Their top pick in this draft, Tyler Naquin, has quelled many of the initial doubts about him. He has been able to stay in center field, and to this point he's made a successful transition to AA. Another center fielder, Logan Vick, was an on-base machine last year in Lake County, but this year hasn't hit at all in the Carolina League. Dylan Baker, who to this point has been the best starting pitcher from this class, broke his ankle in early April and is out for the season. Joe Sever, who has shown power potential, has missed most of the season.

A couple lower-round selections have exceeded expectations. Louis Head (18th Round) is closing games for Carolina, while D.J. Brown (39th Round) is pitching in the Carolina rotation. 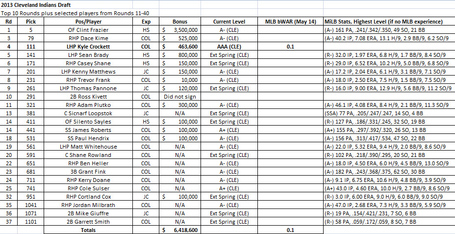 The Indians forfeited their Competitive Balance Round and 2nd Round picks when they signed Nick Swisher and Michael Bourn prior to the 2013 season.

Most players selected in this draft are either in Lake County or still in Extended Spring Training. Clint Frazier, the 5th overall pick, has held his own as a 19-year-old in Lake County. Kyle Crockett (4th Round) became the first player from this draft to crack the majors when he made his debut with the Indians this past week. Dace Kime (3rd Round) has had a rough time of it in his full-season debut, while Adam Plutko (11th Round) and Jordan Milbrath (35th Round) have been a pleasant surprises. Paul Hendrix has taken over as shortstop from Dorssys Paulino, and is among the Midwest League leaders in OPS. Dartmouth grad Cole Sulser is in the rotation in Carolina.