Asdrubal Cabrera and the first-pitch swing

When I tell you Cabrera likes to swing at the first pitch, I'm not telling you anything you don't know. How much is he hurting himself (and the team) with that tactic?

Share All sharing options for: Asdrubal Cabrera and the first-pitch swing

Asdrubal Cabrera is well known for his love of swinging at the first pitch. On Twitter you can find numerous examples of how many Indians feel when Cabrera does that:

Frustration is certainly a part of it...

Nice job Cabrera, swinging at all those first pitches has really worked well for you this year idiot

...I guess that one is a popular choice.

I get it, because of all the things that can happen in baseball, few are more frustrating than having the bases loaded, with the opposing pitcher struggling to find the plate, and then the batter swings at the first lousy pitch, and rolls into an inning-ending double play.

Does Cabrera actually swing at the first pitch more often than most?

Does he hurt the team with those swings as many believe he does?

On the first question, we can look at Cabrera's first-pitch results so far this season: 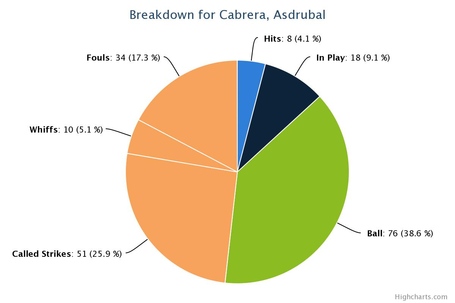 Okay, it's pretty evident that Cabrera does in fact swing at a ton of first pitches, easily the highest percentage of anyone on the team (on the other hand, I was surprised to see Gomes at the bottom of the list).

Brantley has actually had the most plate appearances end on the first pitch, with 33 of them so far (compared to 26 for Cabrera). Jose Altuve leads MLB with 47 at bats already that ended on the first pitch, but even his first-pitch swing rate (34.1%) falls short of Cabrera's.

Alright, so Cabrera swings at the first pitch a ton. Is it hurting him?

Well, on first-pitch swings that are actually put into play (meaning they aren't foul balls), Cabrera's batting average is .308, and his slugging percentage is .500. Those figures are both comfortably ahead of his .259 and .391 figures this season for all plate appearances. Viewed this way, it's clear that Cabrera is doing far better when he swings at the first pitch than when he's waiting longer before making something happen. It seems like fans ought to get off Cabrera's case abut swinging at the first pitch.

On the other hand...

Cabrera's overall numbers are almost exactly the same as the league averages, but his first-pitch results are far worse then the league average for first-pitch swings. Cabrera does better against the first pitch than he does overall, but not nearly as much better as he probably should. Cabrera's OPS+ this season is 110 (after a slow April, he's done very well in May), his sOPS+ (OPS+ for a specific split) for first-pitch swings is only 79. That gives you a good idea of how far short he is falling of the average player.

The samples for this season are, but if we use Cabrera's entire career, we see the same thing. Cabrera has a .272 batting average and .412 slugging percentage, compared to a .322 BA and .462 SLG on the first pitch; the overall AL figures for those years (2007-2014) are .262 and .414, while the first-pitch results are .338 and .547. Cabrera doesn't show nearly the same level of improvement on first-pitch results as the average player.

My guess is that by swinging at so many first pitches, Cabrera is swinging at a lot more bad ones than most hitters. When Joey Votto decides to swing at the first pitch, it's probably a good one for hitting, and his batting average skyrockets from .312 to .429, more than twice the improvement Cabrera shows. In the end, I think there's good reason to be frustrated with Cabrera's plate discipline/decision-making. There's nothing wrong with attacking the first pitch, but you need to be able to recognize whether or not it's a good one to hit, and Cabrera doesn't do that well.