Nothing like back-to-back wins over Detroit to make you forget your cares...

They won't all be like this, but tonight sure did feel good...

After making a series of spot starts for the Indians over the last 13 months, Trevor Bauer has been brought up to join the rotation more permanently, and things went very well.

Lonnie Chisenhall knocked in Asdrubal Cabrera in the bottom of the 1st, and the Tribe then used five hits in the 2nd to put another four runs on the board. Verlander survived long enough to last 6 innings, but not before giving up 11 hits and issuing 3 walks, whiling striking out only 2. He's not the beast he was a couple years back, but he's still a great pitcher, and it was nice to watch the Indians put together such a good offensive night (though they also wasted a couple additional scoring opportunities). David Murphy added his 4th home run of the season later on, but the story of the night has got to be Bauer.

RANDOM ASIDE: I don't know quite where this belongs, but it belongs somewhere, so I'll put it here. At some point during the game, I've forgotten when, Corey Kluber was brought on the air to give an interview from the edge of the dugout. He was asked deep questions like "Is it tough to face Miguel Cabrera?" and he answered them with the seriousness we've come to expect from the Tribe's top pitcher. His teammates decided to have some fun with him, and sprayed water, flung sunflowed seed shells and tossed rosin at him. Eventually, he looked like this: 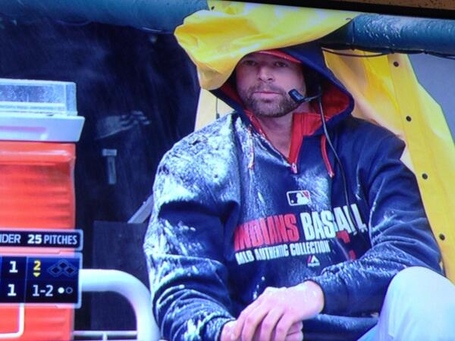 The Klubot cares not for your human distractions.

Okay, back to your regularly scheduled recap...

Things didn't start especially well, as Bauer gave up a 1st-inning home run to Torii Hunter. He gave up a solo shot to Alex Avila too, but he worked around every other man who reached base, helping himself with 5 strikeouts and a nifty scoop at first base to finish an inning-ending double play.

Bauer's stuff looked really good. His four-seam fastball (which he threw on nearly half his pitches) was sitting at 96 or 97 MPH, and hit 99. His other pitches were all sitting in the 80s and used them to get 10 swing-and-misses. Ten base runners in 6+ innings isn't great, and giving up two home runs isn't good, but the Tigers have a good lineup. If Bauer's velocity continues to be at the level it was tonight, and he continues to get that many swing-and-misses with his off-speed pitches, he's going to do very well.

As is, Bauer is now s2 for 2 in terms of making quality starts for the Tribe this season. He's got 13 strikeouts in 12 innings, against a reasonable 5 walks. He looked like an MLB pitcher tonight, like the pitcher he hoped the Indians were getting when they trade Shin-Soo Choo to get him nearly a year and a half ago, like a pitcher we're going to want to watch every fifth days for years to come.

The Indians have rebounded form an embarrassing weekend series against Oakland to win the first two games of this series, and have reminded us why we thought they contend this year. A sweep feels like a long shot, with reigning AL CY Young winner Max Scherzer (who's pitching even better this year) on the mound for Detroit. The series has already been a success though, and maybe the lineup will be as unimpressed with Scherzer's hardware as they have been with other award-winning pitchers over the last couple years.

The Indians improve to 21-25, still in last place, but also only 3.5 games behind the second Wild Card spot. There's a lot of baseball left. Don't throw in the towel on this team just yet.

*May not hold true going forward, but hey, it was true tonight.