Share All sharing options for: Cleveland Indians Sunday News and Notes: May 11, 2014

I checked the scores this morning just to make sure last night's game wasn't really a dream, as perhaps the Indians had actually forced Erik Bedard out of the game early. But no, the six one-hit innings by Bedard actually happened.

Any time a closer is replaced due  to ineffectiveness, it's a big deal now. John Axford had for the most part been pretty good the first month of the season, but that quickly changed once the calendar turn to May. A blown save/loss on May 4th, a straight loss on May 5th, a rather interesting save on May 7th, and then a non-save situation-turned save situation on May 9th, all appearances coming within the span of week. Before last night's game, Terry Francona let everyone know that Axford has been temporarily removed as closer, and that he's going to a closer-by-committee setup. That means if there's a closing situation, then one of four pitchers (Cody Allen, Bryan Shaw, Scrabble, or Scott Atchison) may be called upon depending on the situation.

The good news is that the non-Axford part of the bullpen has been quite good. The bad news is that this new setup will potentially increase the workload on the setup crew. Even though Tribe starters have for the most part pitched really well of late, the setup crew has had to throw a lot of innings because the offense has rarely turned one of those good starting pitching performances into a laugher. What I think will happen is that C.C. Lee will get some opportunities with the Indians ahead late, replacing Axford in back end group. 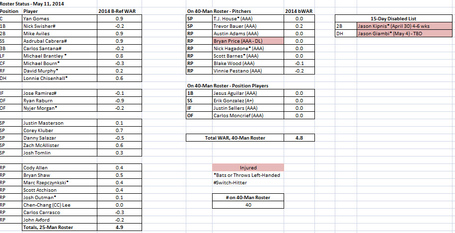 It shouldn't be too much of a shock to see that the pitching staff has now overtaken the position players in WAR. Mike Aviles, despite not playing every day until recently, now leads the club in WAR (0.9), while Ryan Raburn, who has played sporadically from Opening Day on, is the worst on the club with a -0.9.

Carlos Rodon seems to be the consensus #1 draft prospect  and barring injury should be going in the top 2-3 picks in next month's draft. Click through for a scouting report on a pitcher that may be pitching in the majors very soon, perhaps as early as next year.

Sometimes you need to break your own trends, and Alexei Ramirez did just that on a 3-0 count last night.

Chase Utley's case for the Hall is better than you think. | SportsonEarth.com : Howard Megdal Article

I'm hoping that Utley, assuming he has a decent end to his successful career, doesn't have to wait too long to get into the Hall of Fame, because in my mind he's already more than qualified. He's a couple seasons away from surpassing Roberto Alomar in WAR, and Roberto went in on his second ballot.

Footage of the 1919 World Series was found (of all places) in the Yukon Territory. This World Series was later made infamous when it was revealed that eight White Sox players took money to throw the series to the Reds