As the four full-season minor-league clubs get underway this week, it's time to take a look at the rosters.

Today three out of the four full-season clubs (Columbus, Akron, and Carolina) get underway, while Lake County opens their season tomorrow, so it's time to take a look at what changed from the last time we did the update, and look forward towards the 2014 season.

Players who left the organization

Some very familiar faces here, even to those who don't follow the minors that much. LaPorta and Bryson both came to the Indians in the CC Sabathia trade. Diaz had played in the majors before having an awful 2013 season. Espino and Flores had been with the organization since 2007. Romero and Hermida had significant major-league careers, but both seem on their way down.

These two were outrighted as part of the Indians' 40-man roster cleanup just after the end of the season. Although they weren't official minor-league free agents, they did become free agents through refusing outright assignment.

Last year the Indians lost both TJ McFarland and Hector Rondon in the major-league portion of the Rule 5 Draft. This year they didn't lose anyone or select anyone, so you won't have to read the words "Rule 5" until next winter.

I didn't include in this list players signed during the winter and later released; these are just players that were in the organization at the end of the 2013 season and were released in the offseason. A portion of these players were released before spring training began, while another group were released as minor-league rosters were finalized. Both Howard and Sisco retired, which is rather shocking considering that both had only been in professional baseball since 2011, and both were very high draft picks (Howard was selected in the second round, while Sisco was picked in the third round). That those two didn't pan out can be seen in the lack of high-upside starting pitching prospects at the AA level.

Players who joined the organization

On these rosters there are two highlights:

(Note: With the NRIs still deciding whether to accept assignments, Columbus' roster is incomplete. I will update the roster after it is finalized.) 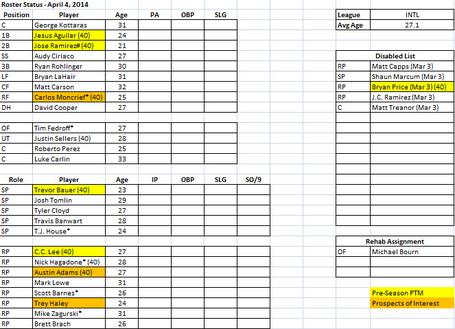 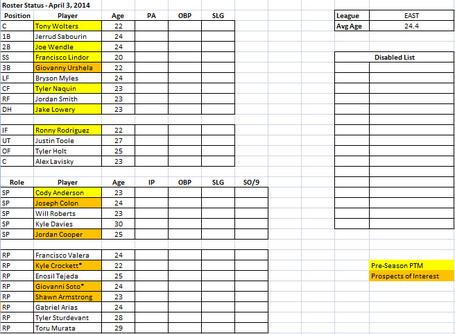 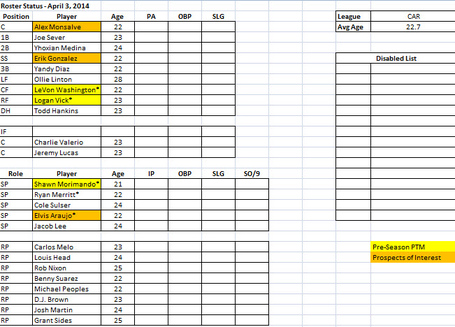 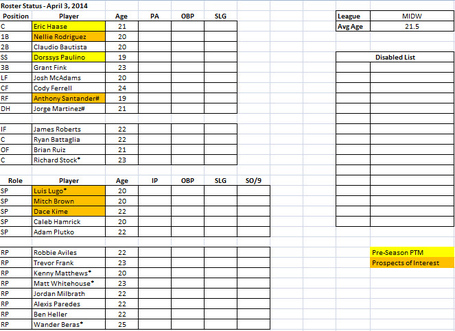 As the week goes on, I'll be adding box scores from each game in the comments below, and as roster moves are made, I will be updating the rosters as well. Feel free to add your comments, questions, and suggestions below.