What are we to make of the starting rotation?

We're almost to the end of April, and the thing that concerns me most is that of the starting pitching. The bullpen to this point has been very good, the offense has been mediocre, the defense dreadful, and all those things are something to talk about, but it's the rotation that is overshadowing all that. There have been occasional points of greatness (like Corey Kluber's almost-Maddux on Thursday) but we've mostly gotten performances like Zach McAllister's yesterday. Zach was outstanding up until the fifth inning, and then he was the opposite of outstanding in the fifth inning. And that inning cost the Indians the game.

All winter we talked about Scott Kazmir and Ubaldo Jimenez, whether the Indians would keep one or let both walk. The Indians let Kazmir walk without giving him a Qualifying Offer, and they let Ubaldo walk, but gave him a Qualifying Offer. To this point Kazmir has been fantastic for Oakland, while Ubaldo has been dreadful for Baltimore (out of sympathy to one of our long-time readers, I will not use that word.). And of course, a pitcher who didn't make the club out of spring training, Aaron Harang, now sports a nifty 0.85 ERA after five starts for the Atlanta Braves.

I mention these non-moves not to play mid-season General Manager, for what looks good (or dreadful) in April will look completely different in a couple months, but to note that how these moves turn out will determine how the club does this year. The offense has underachieved, but you can see the possibilities of a good lineup. The defense has been awful, so awful that it cannot continue on its current trend. Carlos Santana has a batting line (.133/.316/.213) that defies explanation, and you would hope some combination of time and a true backup catcher will get him turned around. But I don't know what to think about the rotation. The seven starters in the mix (the five currently in the rotation plus Trevor Bauer and Josh Tomlin) have the talent/stuff to be good, but will they? I'm doubting that Carlos Carrasco will ever be a good starter, I'm thinking Danny Salazar needs to go to Columbus, and I suspect Justin Masterson is always going to have these stretches of mediocrity. But I'm also doubting my doubts, for I would not be surprised if the opposite of those doubts (wishes?) comes true. 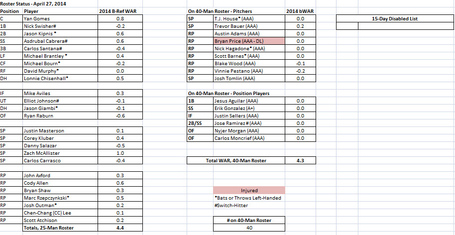 You might want to save this roster somewhere, because for the first time in quite a while the Indians have nobody on either of the major-league disabled lists. The only player on the 40-man roster who is injured is Bryan Price, who is on the Columbus Disabled List.

Another injured White Sock, but then again, Chicago is ahead of the Indians in the standings despite injuries to a handful of key players. For the time being Macus Semien will be the starting third baseman.

A rather nasty blister places Anibal Sanchez on the Disabled List. This week the Tigers probably don't have to fill his spot because of a couple upcoming off days, though they'll have to eventually. The Tigers, like the Indians, don't have a lot of starting depth, though 22-year-old Robbie Ray has started the season very well with the Toledo Mudhens.

The Twins now have an offense, and a rotation that isn't awful.

How many umpires does to take to count to four?