Santana will remain in the cleanup spot (says Francona); meanwhile, the Indians may soon be without Yan Gomes for a few days

Share All sharing options for: Carlos Santana won't be moved down in lineup (Indians Saturday news and notes)

The Indians fell back below .500 by dropping Friday night's series opener against the Giants.  Carlos Carrasco pitched a very Carlos-Carrasco game, which is to say he looked very good at times, but the net result was mediocre.

Zach McAllister will get the ball today for the Tribe (4:05 ET) , with Tim Lincecum starting for San Francisco.

Terry Francona doesn't plan to drop Santana in the lineup - Carlos Santana continues to slump, but Francona says he isn't looking to shake up the batting order. "If he got to a point where he looked like he couldn't handle it, that's different... But when he hits -- and he will -- hitting right smack in the middle helps everybody."

Yan Gomes' wife is expecting a baby any day now - The Indians will likely soon be without their starting catcher for two or three days. Also, Gomes' father in law is former MLB pitcher Atlee Hammaker, whose name was one of my favorites when I was a kid.

RubberDuck Joseph Colon sees velocity rise - A 24-year-old pitching prospect for the Indians (playing at Double-A right now), Colon has had three good starts in a row, and is also showing better velocity than in previous seasons.

MLB scraps changes to transfer rule - Before the season began, MLB asked its umpires to interpret the transfer rule differently than they always have. This led to a handful of plays in which a player made what had always been considered a catch, but lose the ball when trying to make a throw, and had the play ruled not a catch. One such play involved Elliot Johnson, who lost hold of the ball on the transfer, which led to a run scoring in what finished as a 2-1 loss for the Indians. Players were not happy about the new interpretation, and things have now been changed back to the way they were before, effective immediately.

What's the best way to build a Major League Baseball team? - Is a "stars and scrubs" roster preferable to a more balanced collection of talent? At FiveThirtyEight Sports, Jonah Keri and Neil Paine attempt to answer that question.

Forget pine tar, scuffing is where it's at - Former MLB pitcher (and current Toronto broadcaster) Dirk Hayhurst discusses the various ways pitchers might gain an edge, and explains that scuffing the ball was his preferred method as a player.

While waiting for last night's game to begin (thanks a lot, West Coast!), my fiancee and I watched The Conjuring, which was a hit with critics and audiences last summer. I liked it alright, but I can't say it came close to any of my favorite supernatural movies:

5) The Blair Witch Project - I saw it the night it opened in Chicago and it was the most frightened I've ever been at a theater (though it's not the move that scared me into accidentally kicking a woman in the head... but that's a different story). I've never watched it again, so I have no idea if the fear would hold up for me.

4) The Sixth Sense - Not especially scary, but a really well-made movie (boy has it ever been downhill from here for M. Night Shyamalan though).

3) Poltergeist - I was somehow allowed to watch this when I was six. I had nightmares for weeks, and still can't sleep with my hands or feet dangling off the bed.

2) The Shining - Did you know Stephen King (who wrote the book) absolutely hates the movie version? What poor taste! 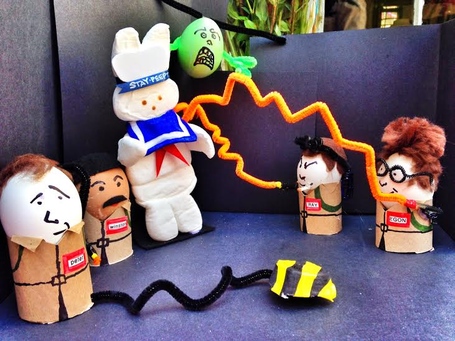 1) Ghostbusters - I suppose this is sort of a cheat, in that while it is obviously a supernatural movie, it is not really the same sort of movie as the others on this list. Whatever, Ghostbusters is awesome, and who are you to tell me it doesn't belong?!

That picture to the right is something my sister made last weekend, for a contest at an Easter party she went to. Clearly I am not the creative one in the family.