Which baseball team is most popular in Ohio?

Are you living in Tribe territory, or enemy lands?

Share All sharing options for: Which baseball team is most popular in Ohio?

The Indians are the most popular MLB team in Cleveland (that's a relief), and in most of the northern half of Ohio, but there the are five different teams that rate as the favorite in some part of the state, including one I wouldn't have predicted.

The New York Times used Facebook likes from millions and millions of users as a proxy for which team in most popular in each part of the country.

(I said proxy, so you're welcome to point out how unscientific this is; you're not telling me anything I don't already know. That said, whatever the best method for determining this might be, I doubt it would lead to results that look much different).

The NYT then created a very cool map, on which you can zoom in all the way to the zip-code level, with write-ups on particular areas of the country. The Indians are the favorite team of 72% of respondents in their home county of Cuyahoga. There are 19 other counties in which a majority of fans favor the Tribe:

Here's Ohio on the map: 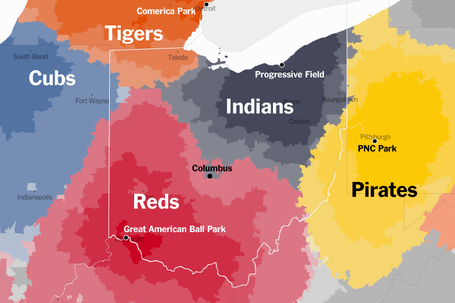 As you can see, the Indians control less than half the state, and the Reds aren't the only other team interfering.

The Pirates are the most popular team in southeastern Ohio. On the northwestern side of the state, the Tigers take over (due in part to Detroit's Triple-A affiliate, playing in Toledo). While no one team has a majority of fans in many counties, the team with the most support in Pauling County is the Cubs, whose reach clearly extends quite a ways from Wrigley Field.

The Reds control more land in Ohio than any other team. The boundary between their turf and the Tribe's is right where you might expect to find it: Running near Columbus. It should be noted though, that Columbus itself is Indians' territory. That's right, we control the Statehouse!

I few other things I noticed:

* Evil lurks everywhere: The most popular team in many states that don't have a team of their own is the Yankees. This includes large swaths of Nevada, Utah, Montana, New Mexico, Nebraska, Oklahoma, Arkansas, Louisiana, Florida, Virginia, and West Virginia. Even in Ohio, there are counties where the Yankees are the second-most-popular team. Your neighbors across the street... they might be Yankees fans.

* The Cubs have far more land than the White Sox, but Chicago itself is pretty evenly divided, as is their shared home county of Cook. The more distant suburbs, along with much of Illinois, Indiana, and Iowa, goes for the Cubs.

* The Rangers dominate Texas once you get away from the Houston area, with more than half of respondents choosing the Rangers in most counties, compared to fewer than 10% choosing the Astros. I wonder if that's because they chose to be the Texas Rangers, leading more fans in other parts of the state to identify with them.

* The Giants edge out the Yankees as the most popular team in Hawaii, while the Yankees, Red Sox, and Mariners all have chunks of Alaska (I suspect the sample of responses in much of Alaska are pretty small... but I also suspect the number of baseball fans in some of those areas is small).

The Indians are tied for 7th, which I'd say is pretty good.