News about the Indians and the AL Central

Cleveland Indians searching for answers after 5-0 loss to Blue Jays drops them to 7-10 | cleveland.com

It looked like Mark Buerhle turned the clock back to his days with the White Sox. And in this case, at least from the Indians' perspective, the past was definitively not something they wanted to revisit. But beyond what Buerhle did, defensive plays not made and the law of RISP averages catching up to the club contributed to the team's seventh loss in 9 games.

And it's not like they've been playing a particularly brutal schedule. They've lost series to Minnesota, Chicago, and now Toronto, clubs that were among the AL's worst a year ago. Now teams can change drastically from year to year, but with the possible exception of Toronto, who underachieved last year, I don't see any of those three clubs contending for the playoffs this year.

The good news is that no one's gotten hot in the AL Central, and it's only April 20th. With a couple good weeks to close April, the Indians will finish above .500 for the month, and will still be in decent shape. But the underlying problems (starting pitching, defense, offense) that have plagued the team early will need to be corrected.

In a couple instances, some Yan Gomes throws have cost the Indians crucial runs. Some of those throws were unnecessary, as in the attempted pickoff from Friday's game. Still, Gomes' caught stealing percentage is well above the league average, and you want other players to know in the back of their mind that Gomes will throw to any base at any point. That knowledge may prevent big leagues, and stop steal attempts before they even start.

The Indians have been extremely patient with Jason Giambi's rehab, and part of the reason for that is the difficult 25-man roster decision that awaits them when they activate Giambi from the Disabled List. Before the season the easy answer (at least from their perspective) would be to option Lonnie Chisenhall to Columbus. But Chisenhall has been one of the clubs' best hitters in this early season, and it's almost a guarantee that the offense will suffer should Chisenhall be optioned. And as much as I'd like for Elliot Johnson to be the one to go, the Indians cannot manage with just position players on the bench who can play the field.

So I think either C.C. Lee or Blake Wood will be the ones sent down when Giambi is activated tomorrow. It may pain Francona to have "only" seven relievers in the bullpen, but I don't think there's any other option. 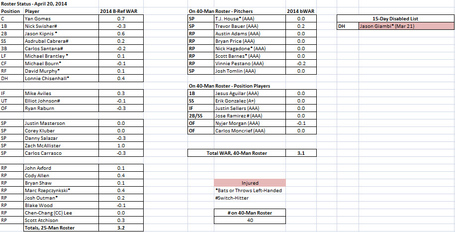 If no one goes on the Disabled List between now and Monday, then the Indians will be in the peculiar situation of having no one on the either the 15-Day of 60-Day Disabled List. That's a good thing. Having everyone available on your roster is a luxury few teams have for very long.

Jason Giambi will be make his 2014 debut early this week, but I'm already thinking of replacing him on the roster. Although Giambi's presence in the clubhouse is something that is always brought up by Francona and the players, with Lonnie Chisenhall, a left-handed hitter, off to a great start, that leaves Giambi's role as a pinch-hitter and occasional DH on days when Carlos Santana is behind the plate. And there's also Ryan Raburn on the bench, who if you haven't noticed, hasn't gotten much playing time either.

I think eventually the Indians are going to have to bring up a true backup catcher once they are convinced that Carlos Santana can be an everyday third baseman. Not having to worry about catching a couple times a week should help Santana's play, and allow the Indians to actually rest him occasionally, or perhaps stick him at DH from time to time. If Roberto Perez, who is an outstanding defensive catcher, continues to rake in AAA, it will be tempting to solve a couple roster problems at once by bringing him up to be Gomes' backup. But that would mean saying goodbye to Jason Giambi as a player, and that's something the Indians don't  want to have to do now.

Speaking of strains, Adam Eaton strained his hamstring last night, and will be out a couple days.

Bartlett, who re-signed with his original team this winter, is hanging it up.

Smyly, even though he began the year in the Detroit, made his first start of the year Friday night against the Angels.

Let's just say that it's a good thing that Bartolo Colon is a heck of a pitcher.