After testing the position player formula developed by Adam last month, I've made a few minor tweaks, changing a couple of the position adjustments (changing catcher from +.25 to +.20, changing first base from -.25 to -.20, changing right/left field from -.15 to -.10.). I think it's an upgrade over the criteria that I used in the past, and takes the emotion out of the process; had I done this year's selections like last year's, I probably would have included Giovanny Urshela and Carlos Moncrief and left off Logan Vick.

Here are the basics of the formula for those who are new:

Without further ado, the 2014 position-player Prospects That Matter: 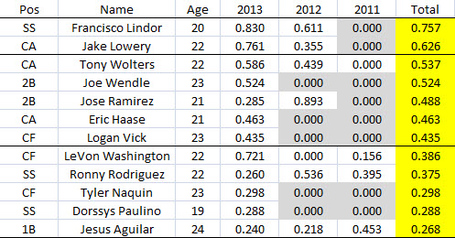