Last time we covered the starting pitchers in the organization, and this time we'll look at the relievers.

For those who missed it, here's the PTM formula for pitchers:

PosMod: Starting Pitchers have no modification, while Relief Pitchers have a -.600 modification to their score to account for the innings differences. For instance, the typical reliever throws 50-60 innings in a season, while a typical starter throws 180-200 innings. Leaving leverage aside, a starter is going to be more valuable to a club than a reliever.

As you can see, a relievers gets a rather sizable penalty, and while that may seem harsh, I think it reflects the future value of a starter and a reliever. Only a very few relievers in the game top 3.0 Wins Above Replacement (Craig Kimbrel, for instance), while a good starter can easily reach that mark because the amount of innings he's on the mound. Yes, good closers can earn in some cases as much as a good starter (witness Kimbrel's recent extension), but I don't think dollars is equal to value in this case. If you're on a limited budget, I think you'd much rather pay a good starting pitcher $10M to pitch 200 innings than a great reliever to pitch 60.

On to the rankings: 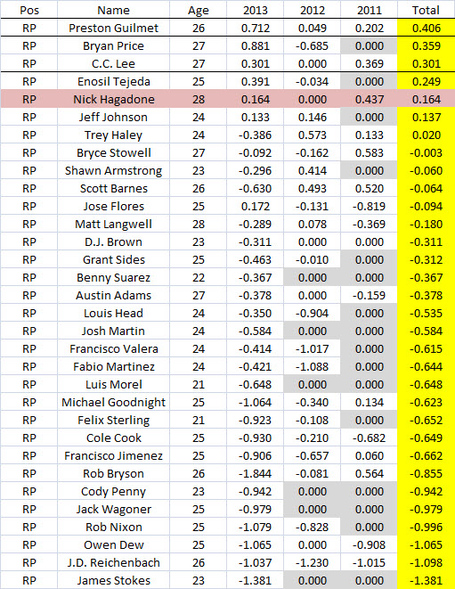