In coming up with a formula for pitchers, I tried as best I could to have the results be comparable to the position player formula. In other words, a .300 position player and a .300 pitcher should be considered comparable prospects. So I decided: why not use OBP and SLG as well for pitchers? So those two stats are used, with just the signs reversed, as well as age and level. OBP incorporates walk rates and hit rates, and SLG incorporates home run rates (and other extra base hits allowed). The only traditional pitching rates these two stats don't include is strikeouts, and so I added it.

So here's the formula:

PosMod: Starting Pitchers have no modification, while Relief Pitchers have a -.600 modification to their score to account for the innings differences. For instance, the typical reliever throws 50-60 innings in a season, while a typical starter throws 180-200 innings. Leaving leverage aside, a starter is going to be more valuable to a club than a reliever.

So without further ado, here is the complete list of pitchers who qualified at a full-season league in either 2013 or 2012: 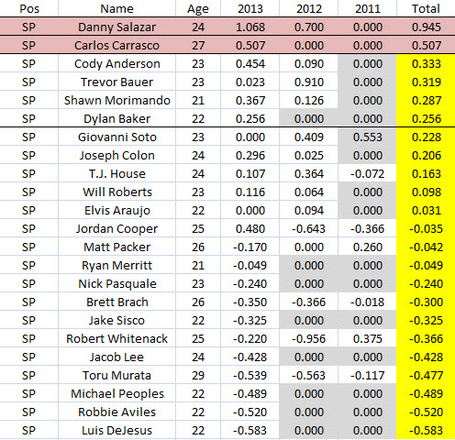 Starting pitching as not an area in which the Indians are deep, particularly in the full-season leagues. The Indians have drafted heavily in starting pitching the last couple years, but thus far Dylan Baker has been the only one from the 2012-2013 to crack PTM. Mitch Brown, Kieran Lovegrove, Caleb Hamrick, Luis Lugo, Dace Kime, and Sean Brady, all pitchers that could make the mid-season PTM list, haven't yet qualified in a full-season league. But even so, that group is several years away. There's also some interesting pitchers that didn't quite crack the PTM threshold (Joseph Colon, Elvis Araujo, and T.J. House, for instance) that could turn into major-league starting pitchers. But overall, the organization is very thin in starting pitching.

Next Up: Relief Pitchers