One of the criticisms of last year's PTM list was that some older players were excluded. A couple weeks ago Adam proposed a formula that takes into account age, position, and how the player did (specifically OBP and SLG). You can read up on his methodology here. This formula penalizes players who are old for their league, but doesn't necessarily remove them from consideration. In addition, it gives credit based on defensive position (for example, catchers and shortstops get a boost, while first basemen and corner outfielders get penalized).

I decided to test this formula out using the AL position players who earned 3.0 bWAR or better in 2013, figuring that's the end result PTM is supposed to be predicting. I used Adam's formula to compare those players' first season in a full-season league (200 PA minimum) to the position players in the Cleveland system last year (who are highlighted in yellow). For simplicity's sake, I did not combine levels for the Indians minor leaguers, only pulling over stops in which there were 200 or more Plate Appearances. I also excluded any short-season experience, so Clint Frazier and Francisco Mejia won't show up here. 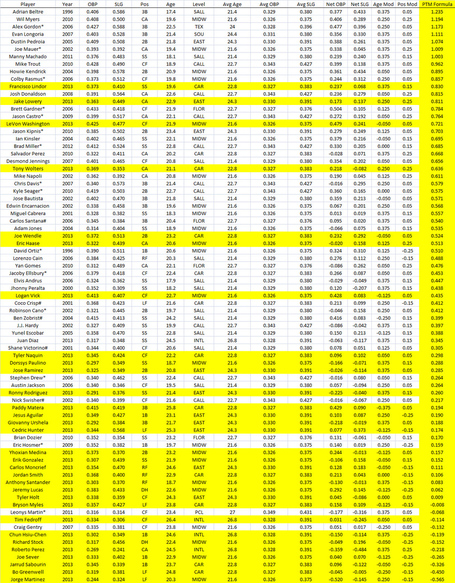 Next step: Finalize the formula, then add previous seasons and partial seasons in an attempt to come up with a final 2014 PTM list.