News from Friday's win, Justin Masterson's possible return, Yan Gomes' general awesomeness, proposed changes in the world of baseball statistics, and the best players not in the Hall of Fame.

This has to be one of the longest news & notes posts in LGT history, but what can I say, it was a long, wild night...

The Indians won 2-1 over Houston Friday night, in a game called in the middle of the 7th inning, due to rain. I was surprised at how quickly the game was called (after only 40 minutes or so of delay), but it seems to have been raining in Cleveland all night since then, so it seems MLB made the right call (it's their decision, not the home team's). Zach McAllister got the Tribe through five innings, then Mark Rzepczynski and Bryan Shaw retired six straight batters to take care of the last two frames. The offense was once again somewhat disconcerting. Carlos Santana scored the first run on a Mike Aviles groundout; Ryan Raburn scored the second on a goofy play involving a throwing error by Houston.

In any event, this time of year, a win is a win, and I'm not gonna get too broken up about style points.

Later on, the Royals defeated the Rangers, which allowed the Indians to pass Texas and take control of one of the two Wild Card spots. The Rays beat the Orioles in 18 innings (nearly seven hours after the game began), so the Tribe still trails them, but that does at least push Baltimore a bit further back.

Two items of note from that marathon in Tampa Bay:

1) Baltimore used ten pitchers, but none of them was closer Jim Johnson, as they waited (and waited) for a save opportunity that never came. Good work, fellas. 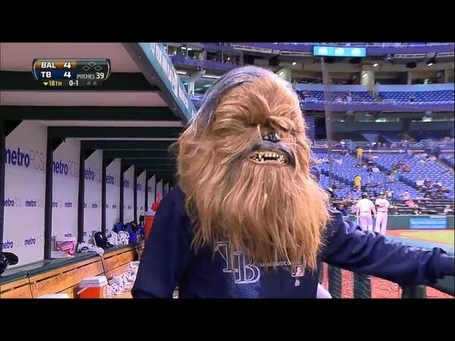 Jordan Bastian's daily notes at MLB.com: Justin Masterson might be ready to pitch 3 or 4 innings before the end of the season, in preparation for a more extended appearance, should the Tribe reach the ALDS; Francona has confidence in Chris Perez; the Indians have the best record in baseball against losing teams.

From Indians Baseball Insider: a comparison of this year's team to the 2007 model.

As you may have heard, the Dodgers clinched the NL West on Thursday, and celebrated with a pool party. It rubbed many the wrong way, and I suppose I'd probably hate them for it if they'd done it in Cleveland, but they didn't, so I don't.

I don't use Baseball Prospectus' WARP as frequently as I do Baseball-Reference and FanGraphs' WAR figures, but it follows the same general principle, attempting to account for as many variables as possible in assigning a single number to each player's production. BP is in the midst of revamping its calculations, and is doing so in a very transparent manner. This week Colin Wyers examines why 'replacement level' is continually changing, and observes that the greatest players of bygone eras are overrated by comparisons to replacement level.

Speaking of baseball stats, Joe Posnanski explains what he would do if he were in charge of baseball statistics. Errors? Gone. Defensive indifference? Gone. No RBI on a double play? Gone.

Also from Posnanski: A look back at former heavyweight champion of the world, Ken Norton Sr., who passed away Wednesday. I realize this has nothing to do with baseball, but I have an appreciation for boxing, and Norton was part of the greatest era in the heavyweight division. Posnanski's piece is a great read, as is Leigh Montville's remembrance of the man who once broke Muhammad Ali's jaw in the 1st round of an epic clash. Whether you care about boxing or not, Norton's story is wonderful: a single dad who paid the bills by working on a Ford assembly line before capturing arguably the grandest title in sports. Rest in peace, champ.

David Laurila at FanGraphs asked 22 baseball writers: Who are the three best (eligible) players not in the Hall of Fame?(Not including Barry Bonds and Roger Clemens). The most fun part of anything exercise like this: choosing the ballot you like the least. I'm going with the one that's got Jim Kaat at the top of the list!

Top (eligible) players not in the HOF (non-Bonds/Clemens):

6) Alan Trammell: 63.7 fWAR, 70.3 bWAR - He has basically the same total career value as Derek Jeter, just with a lot less mystique. His numbers don't look as impressive as they are, due to his playing right before offense exploded, but he did everything well.

5) Kevin Brown: 73.5 fWAR, 68.3 bWAR - He dropped of the ballot after just one year, making him one of the most underrated pitchers in baseball history. May have been the best pitcher in baseball in 1996 and 1998, but didn't win a Cy Young Award either year.

4) Tim Raines: 66.4 fWAR, 68.8 bWAR - The sabermetric community's darling. He suffers for two reasons, I think: 1) He wasn't as good as direct contemporary Rickey Henderson. 2) He was an average player for many years after his prime, years that many remember instead of his great ones. Got on base and stole bases at elite level.

3) Mike Piazza: 63.6 fWAR, 59.2 bWAR - The best-hitting catcher in MLB history. He gave some of that value back on account of poor defensive work, but not so much that he shouldn't still be any easy call for enshrinement in Cooperstown.

2) Curt Schilling: 83.2 fWAR, 79.9 bWAR - A workhorse with elite control and a legitimately fantastic prime, which came relatively late in his career. He also has arguably the best postseason resume of any pitcher in history.

1) Jeff Bagwell: 80.3 fWAR, 79.6 bWAR - One of the 40 best hitters ever, and among first basemen, a fine fielder and perhaps the greatest base runner ever. If the Hall of Fame can't see fit to include him, they might as well shutter their doors.

Not only would I vote for every one of those guys, they aren't even half the players I believe deserve induction. The Baseball Hall of Fame is a mess right now, and getting messier every year.