If the comment's a greenin', don't come a-something that rhymes with that.

Share All sharing options for: Soylent Green is People: 9/20

Welcome back for another episode of Soylent Green is People. The SGiP bandwagon is really filling up quickly here.

We actually go to press on Friday, but I'm loving the enthusiasm.

Yeah, everyone’s getting way to fired up.

What? No. I want people to be excited. The fact that I've made it this far into the season without having been taken off the air just makes me want to sing.

When I’m stuck a day That’s gray, And lonely, I just stick out my chin And Grin, And Say, Oh!

Um, that wasn't exactly the song that I had in mind, truth be told. Not much of a musical guy.

What about the bisexuals?

They're free to listen to whatever they like. I'm not here to tell people what music to prefer.

Because that wouldn’t be very kind.

Exactly. While I consider my taste in music impeccable, I can allow for variations in preference.

I'm sorry, but I'm a sucker for a good Sufjan Stevens reference. His work is a staple around my house, especially around Christmas time. Throw on some Sufjan, maybe flick over to the Browns for background noise...

It’s hard to care about the Browns anymore. My sports seasons end with the Indians and start with Xavier basketball. I watch the Browns if Chelsea plays on Saturday.

My goodness, if you're not just too cool for school, I don't know who is. I can't wait until European soccer gets too "mainstream" for you and you have to switch over to something else nobody has heard of yet. Ethiopian camel racing or something. Scripted shows on sports channels, maybe.

I’m not sure I could take six further seasons of poorly written will they/won’t they on MLB Network.

Fine. I'm sure too many other people would be watching for you to be interested in it anyway. Speaking of other people watching, occasionally one of the senior members of the site will rise above the cloud layer to drop a knowledge bomb of mythic proportions on all of us. Members don't get much more senior than our resident Methuselah, and Chuck unleashed a knowledge MOAB on the discussion about attendance this week.

I’ve seen just about everything there is to see when it comes to Indians baseball. A few things you guys will never see but would love to – like 65k+ at an Indians home game – and I’ve seen things that I’m sure you never hope to see, like 1,500 fans in a 70,000 seat stadium watching a Tribe/A’s game in a drizzling rain in late September. I was at the last game at the old Stadium and the first game at the Jake. I was at the first World Series game ever played at the new stadium. I’ve see ‘em lose heart breakers in the ninth and come from behind to overcome impossible odds too. I’ve seen ‘em score seven runs in the second and coast to a blow out. I’ve seen the opposition hit back-to-back-back home runs at the start of the game and absolutely cream us. But you know what I’ve never experienced? A bad time at the ball park. I love to go to baseball games. Go with a few of my buds, drink a few brews, talk some bullshit, watch our favorite players play for our favorite team. I’ve gone by myself and made new friends through the medium of baseball. It’s a brilliant sport with a fabulous atmosphere. Winning is nice but it’s not even in the top three reasons to go to a baseball game. I go for the atmosphere, the smell of the park – beer, hot dogs and new mown grass – the camaraderie of the fans – funny, fanatical, loving – and the reminders of my youth when I could still play the game and go to the park with my dad and my brother. Winning’s good but you know what? Only one team out of 30 teams is going to win it all. That means that 29 teams will be "losers". But the only real losers are those folks who’ve stayed away from the stadium waiting to win it all. They’ve missed 65 years of pure joy. I feel sorry for them.

Nailed it. I once high fived a wheelchair-bound man who was still holding his glass eye in his other hand because he had taken it out to polish it (or whatever) right before Albert Belle went deep. You (probably) don't get that kind of experience in your living room. If you can, go to a game. Here's the rest of your week in green.

The fact that we are scoreboard watching with 10 games left is an amazing feeling that was so unexpected.

I hate the Fielden Culbreth almost as much as I loathe the Angel Hernandez.

Marijuana. Wait, I did that wrong.

Is Chelsea your daughter?

I get that you don’t think other people will get tired of you posting the same thing repeatedly. But I’m still amazed you don’t get tired of it. If I send you a trophy with "was nominally right about Ubaldo" on it, will you give it a rest?

Indians are awesome, everyone else stinks. That’s the only reasonable explanation.

GENERAL LEE DID NOTHING WRONG!

Saw this in Twitter and thought it was quite appropriate for our season series against the White Sox: 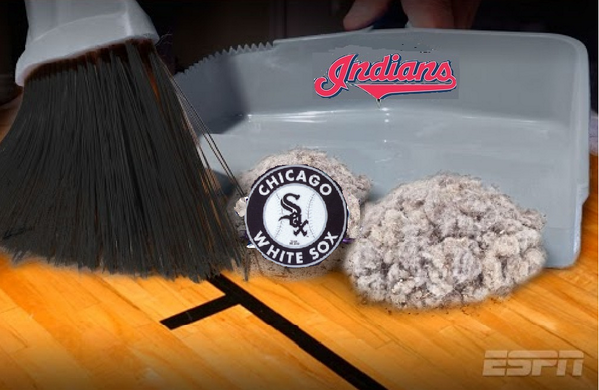 First one to find him wins a tshirt that says "I survived the original 9.15.2013 Game Thread."

I now realize we have been debating semantics all along.

Do you mean in this conversation, or for the whole history of LGT?

Instead of writing an ending for this week's column, I'm empowering you each to write your own.