When the Indians designated Mark Reynolds for assignment yesterday, it came as a surprise for a lot of us. But based on what came out in the wake of the move, we should have been expected this.

Yesterday the Indians needed to bring up an extra arm, which as it turned out was very much needed. The prime candidate seemed to be Scrabble, who had options remaining. But the Indians chose to to remove Mark Reynolds, which meant a DFA (Designated for Assignment)*.

If you would have told me back at the end of April that the Indians would be DFAing Reynolds in August I would have looked at you incredulously for a long time, then say "you're crazy." Because Mark Reynolds carried this team in the first part of the season. He hit .301/.368/1.019, hitting 8 home runs along the way. And some of them were rather memorable...remember this one against Oakland?

Terry Francona still played him regularly through July, but finally reduced his role recently. Other players like Ryan Raburn and Yan Gomes deserved more playing time, and those additional at-bats came at the expense of Reynolds. And if you read between the lines, Reynolds wasn't taking his new role well:

"I think it was becoming harder for Mark to handle not playing,'' Francona said.

You can understand Reynolds' frustration. He had signed a one-year deal with the Indians last winter in order to improve his standing for this coming offseason, when perhaps he could get a multi-year deal. And when he started the season on fire, it looked like that would happen. But after the three-month slump, he desperately needed a chance to regain his form. After all, if he could be that hot in April, who's to say he wouldn't get hot in August or September. But with the prospect of starting only a couple times a week facing him, he was seeing any chance of a multi-year deal, much less a major-league deal, going down the tubes. After all, if he wasn't playing, he wasn't going to be able to hit. So in one way, this DFA might be the best possible outcome for him. There are several teams that would be more than happy to give him an everyday opportunity, and with the right 2-3 week hot stretch, he could put himself in a good situation heading in to the offseason.

As for the Indians, for now they're going to go with 8 pitchers. That seems to be the configuration that Terry Francona likes most, and it isn't like there's a position player in AAA that is forcing the Indians to bring him up.

"You always need to be cognizant of, if there's an injury somewhere, all of a sudden you're looking for a bat,'' Francona said. "But you need to make decisions. Going into (Thursday night), from where we sit, we think we're a better team with an eight-man bullpen. The best way to derail a season is to get your bullpen out of whack, so we won't do that.''

Yesterday that eighth pitcher was Preston Guilmet, and today it will be somebody else. I think the Indians might be able to recall Vinnie Pestano today (depending on when his 10-day clock started), though perhaps they haven't seen what they're looking for yet from Vinnie. There are many other possibilities, including CC Lee, Nick Hagadone, and Blake Wood. They could also call up a starter such as Carlos Carrasco if they need length in the bullpen, though that's probably unlikely. Of course, if the Indians have an opportunity to acquire a bat in a trade, that 8-man bullpen goes out the window.

*For those who aren't sure what this means, it's a way for clubs to remove a player from the 15-day and 40-day roster while they pass him through waivers or attempt to trade him. If the Indians try to trade him, they will first have to pass him through revocable waivers because it's after July 31. If someone claims him, the Indians would probably just let him go for free, as the claiming club would take on his contract.  If they are just going to release, they'll pass him through the usual outright waivers, which are irrevocable. If no one claims Reynolds on outright waivers, the Indians are on the hook for his remaining salary, and he's free to sign with anyone. 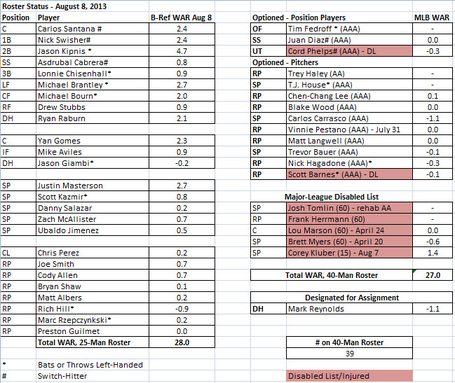