On this last day of August, the Indians for one day are going to go with (gasp!) a seven-man bullpen in order to get Kubel onto the roster.

It is interesting that they went this route, as I would have thought that Matt Carson would have been the guy to go. Carson probably won't last much longer, as the Indians still are going to add a third catcher (Kelly Shoppach, probably) to the 40-man roster. But because Carrasco pitched last night, and because they can just bring him back up tomorrow if they wanted to, they decided to have a bit more flexibility with their position players.

Kubel has been awful this season. The Indians took a chance on him in the same way that the Yankees took a chance on former Indian Mark Reynolds: both have impressive power, and just might need a change of scenery. And right now, the Indians need to be taking chances on offense, as the season is in the balance right now.

One other roster move announced today...

It was very much a longshot for Cooper to contribute to the Indians this season. He's not that far removed from major back surgery, and the Indians apparently didn't think he was ready, opting for Jason Kubel instead. The upside with Cooper is that the Indians would have control of him for potentially five more seasons. But because the Indians weren't going to call him up this year, Cooper exercised the opt-out clause in his contract, and he'll be able to sign on with another organization before the end of the season. 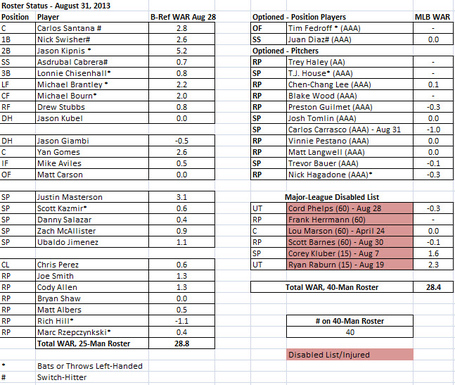