A unique look back at the 1995 World Series

You don't really know the 1995 Indians until you look at this.

Share All sharing options for: A unique look back at the 1995 World Series

The Indians play the final game of a 3-game series against the Braves later today. Like many Tribe fans, seeing these two teams play one another makes me think about 1995 (especially because fans in Atlanta still do the idiotic 'Tomahawk Chop' during games). The 1995 Indians go on a short list of the best teams in baseball history that didn't win the World Series, and have a case as the best team in franchise history. Because they didn't win the World Series, thinking about that team can be somewhat bittersweet, which is too bad, because that was an absolutely incredible squad. While the results of that World Series were a source of great personal anguish for many of us, I would frankly rather look back at that year's lineup than ponder the horrific stretch this year's bats are immersed in at the moment. Fortunately, the internet was good enough to supply me with a take on the '95 team I'd never seen before: The Christie Brinkley Collection.

At some point after the 1995 World Series, for reasons known only to an elite group of media moguls, Brinkley (Gayle Gergich, for you Parks and Recreation fans)as sent by the Pinnacle trading card company to photograph members from each of the participating teams. Did she ask for this assignment, or was she sought out for it? Maybe a top executive was wooing the supermodel, and offered her this opportunity in an attempt to win favor. Brinkley certainly knew her way around the front of a camera, so perhaps the thinking went she'd be a star behind it too. It's all only idle speculation. Ultimately though, the reasons don't matter, what matters is that it happened, and that these baseball cards still exist, maybe even in your own mother's basement.

I must thank Michael Clair for pointing me towards this set. Michael runs Old Time Family Baseball, a blog he describes as "Daily news, recaps, and ridiculous pictures from across the baseball world. Extra focus on stirrup socks, squeeze bunts, mustaches and old baseball cards. In other words, your exact interests." I've linked to his work before, but in case you're not already familiar, you should check it out. Even if you are already familiar, you should check it out, because there's probably something new. Mentioned in Clair's post is an older post from Trader Crack's Card Blog, which may be where he (Clair) first found out about the Brinkley set. If you go to the original post, you can see the cards that feature Atlanta players, including pretty tremendous Ryan Klesko and Marquis Grissom entries (plus Greg Maddux, who you may know, I'm a big fan of).

Here are the seven Indians from the set, which I've ranked according to my own personal preference.

This is a pretty dull shot, but the card is still notable for two reasons: 1) Franco wasn't actually on the 1995 Indians, he spent that season playing in Japan. Brinkley was aware of this, no doubt, but when you have the opportunity to photograph Julio Franco in his trademark earflap-less batting helmet, you go for it. 2) Get used to seeing those clouds: 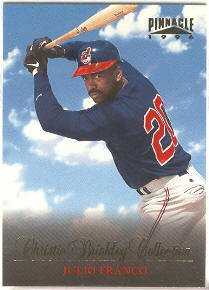 I like to think Manny had no idea those fans were behind him, clamoring for an autograph, and he sat there reading that program for the next three hours: 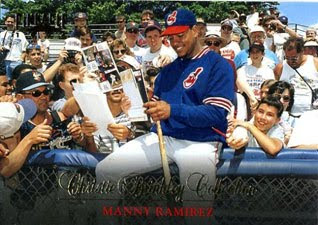 Have you ever cuddled with a man wearing cleats and a catcher's mitt? Oh, I see... Yes, college is a crazy time. ...Well, I bet there weren't such picturesque clouds: 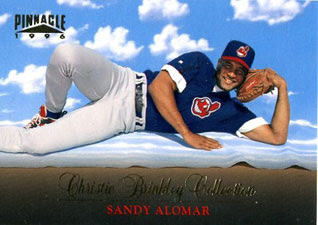 The beauty of the coulds in this shot, is that Brinkley made the bold decision to allow Lofton's shadow to fall onto the backdrop, ruining the illusion. I suspect it was a form of protest on her part, due to her frustration over Pinnacle not giving her the budget to take the players into the desert and find the scenery she really wanted: 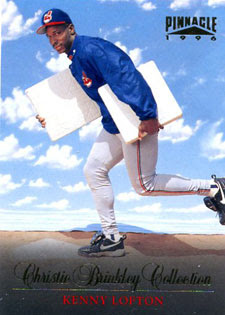 Brinkley had a different look in mind for Thome, but he refused to take those gloves off. It's often forgotten, but during Spring Training in 1996, Jim was preparing to fight WBO Heavyweight Champion Riddick Bowe. Thome was defeated on points (ringside observers blamed his horrible form, seen here), but he did score an 8th round knockdown: 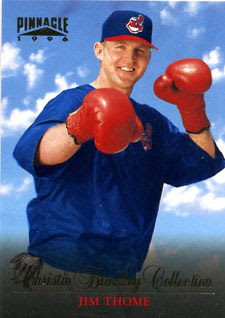 Was that heart drawn on for the photo shoot, or did Baerga have it all along??? Only he and Christie know: 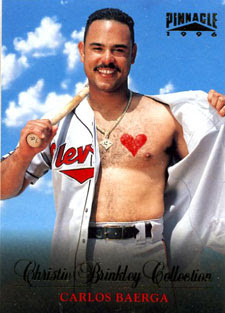 The baby Albert is holding is Brinkley's own son. I love that she understood intuitively that of all the players in camp, Belle was the one to trust with her 9-month-old child. 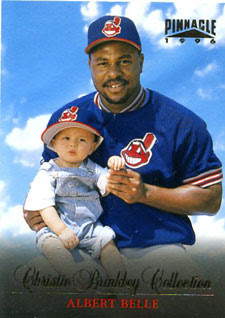 There you have it folks. You might as well toss your baseball card collection in the trash, because clearly these are the only ones worth owning.