Finally the Indians say uncle, placing Ryan Raburn on the DL with a sore Achilles.

The @Indians place OF Ryan Raburn on 15-day DL with strained Achilles tendon; purchase contract of OF Matt Carson from Triple-A Columbus.

Because Raburn has been out of action for so long, his DL stint only has to last until September 3rd. That's just one week from today. But the Indians really need an extra position player because they're already playing with just three bench players, and one of those players is usually Jason Giambi, who can't play a position.

So Matt Carson is up, at least for the time being. Carson is a 31-year-old outfielder who's been plying his wares in the minors since 2002. That's right, 2013 is Carson's 12th different season in the minors. He's got a few stints in the majors, including 26 games with the Twins a year ago, but for the most part he's been helping AAA teams win championships. He has a career minor-league line of .263/.326/.443.

He can play all three outfield positions, but if he does play any with the Indians, it will be in either right or left field, as the Indians already have enough coverage in center. He's historically hit better against left-handed pitchers than right-handers, but he's not in the lineup tonight against Paul Maholm. So perhaps he's just on the roster in case of another injury. The Indians can expand their major-league roster this coming Sunday, and there's potentially a couple players that could be added to the 40-man roster, including David Cooper. Or the Indians could acquire a player via a trade between now and then. In either case Carson would likely be the first player jettisoned from the 40-man roster.

To make room for Carson on the 40-man roster:

Had Phelps been healthy, it's very likely that he would have gotten the call here, but because he wasn't his involvement is limited to clearing roster space. At the beginning of the spring there was a decent possibility that Phelps could have made the team, but Raburn's hot March ensured that Phelps would be going back to Columbus. Cord appeared in four games with the Indians (split between two callups), but was quickly sent back down as soon as his roster spot was needed. 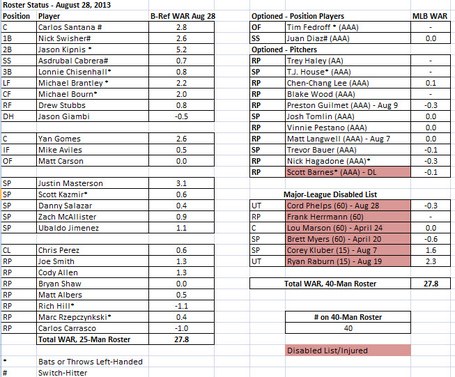