Matsuzaka made 19 starts for Columbus this year and posted a 3.92 ERA.

Indians have granted RHP Daisuke Matsuzaka his release. More soon on http://t.co/FJ5W7Rktqb, and more details tonight from the ballpark.

The key is that the Indians granted Dice-K his release. The Indians don't exactly have a bunch of blocked AA arms that really need to see in AAA. They certainly would have liked to have Dice-K keep pitching in Columbus in case they needed him. But undoubtedly he's pretty far down on the depth chart, behind Carlos Carrasco, Josh Tomlin, and perhaps even behind Trevor Bauer and TJ House. And because they'd have to add Matsuzaka to the 40-man roster to bring him to Cleveland, that was another knock against him. The Indians have 39 on their 40-man roster, but they are ridiculously pitching-heavy on their optioned players and are probably going to add at least one (David Cooper) position player on September 1st. The Indians could also be looking at a guy like Jose Ramirez, who has been playing other infield positions of late, to be a second utility infielder and pinch-runner (he has 37 steals on the season). Or a trade. The point is that adding a starting pitcher to the roster that isn't appreciably better than the other depth guys doesn't make a whole lot of sense. 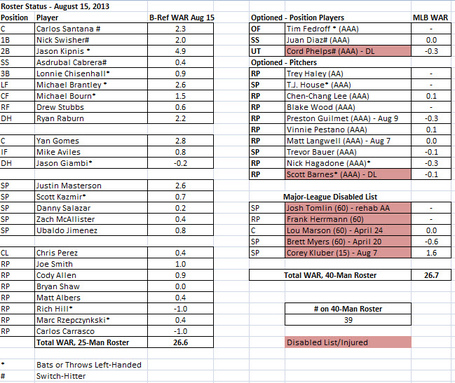 Undoubtedly they went to Dice-K recently and told him that he wasn't going to be called up on September 1st. And Dice-K, feeling that he had a shot at making a major-league club somewhere else, then asked to be released so that he'd have some time to find a better situation for himself. It's likely that that was part of his renegotiated contract (that he could ask for his release at any time after a certain date), but even if it wasn't, the Indians usually honor those types of requests.

Remember when the Indians signed Daisuke Matszuaka? He was THE NRI of the spring for the Indians, perhaps THE NRI of the American League. He was slated to be the fifth starter in the rotation. And then he got hurt, while another NRI started wowing people in B games. That other NRI was Scott Kazmir, and he's pitching his way into a multi-year contract this winter. Meanwhile Dice-K, if he doesn't get a major-league shot, is looking at another NRI deal, or perhaps a return to Japan. It's funny how things work.