Cabrera exited last night's game with a strained right quad and will now be out for the next two weeks, possibly longer.

As expected, Indians shortstop Asdrubal Cabrera has been placed on the 15-day DL with a strained right quadricep. Cabrera pulled up lame while attempting to run out a ground ball last night and had to be helped off the field. Cabrera has a batting line of just .254/.311/.454 this season, due to a very poor first three weeks of the season. Since April 28 his line is a very strong .299/.351/.511 in 35 games.

Cabrera is one of the better shortstops in the American League and his production will be difficult to replace.

It's hard for me to view him Diaz anything but a late-inning defensive replacement and I would have preferred Lonnie Chisenhall or Cord Phelps be called up instead. Chisenhall has been hitting well since being sent down to retool his swing and find his confidence, but it seems the front office doesn't think he's ready to return just yet. 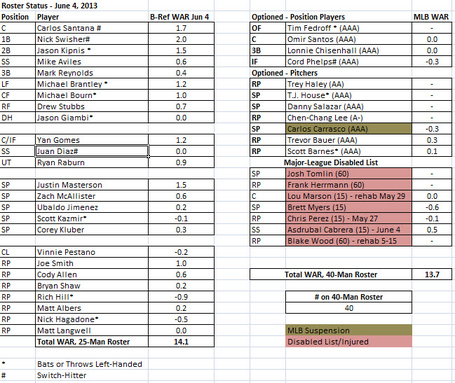