Asdrubal Cabrera comes back early, and John McDonald moves on to other backup opportunities.

Asdrubal Cabrera only spent 22 days on the Disabled List, well short of the 4-6 weeks recovery time the team original estimated. And Asdrubal is coming back at a good time, as Mike Aviles has struggled at the plate over the past week or so. Aviles will return to his previous role as backup infield, spelling Lonnie Chisenhall at third, Jason Kipnis at second, and of course Cabrera at short. Hopefully this will also mean that we've seen the last of Mark Reynolds at third base. Terry Francona now has his original four-man bench (with Gomes subbing for Marson), and has a lot of different lineup configurations at his disposal.

John McDonald leaves after just a couple weeks with the Indians. He made just the one start, and otherwise served as a late-inning defensive replacement at third base. He'll probably catch on somewhere (perhaps Texas?), and serve the role he served with the Indians: a backup infielder who won't see the plate unless there's an emergency. 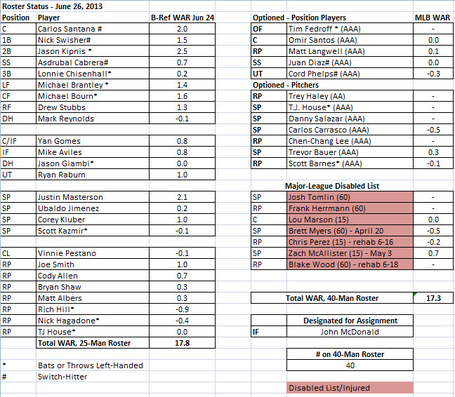